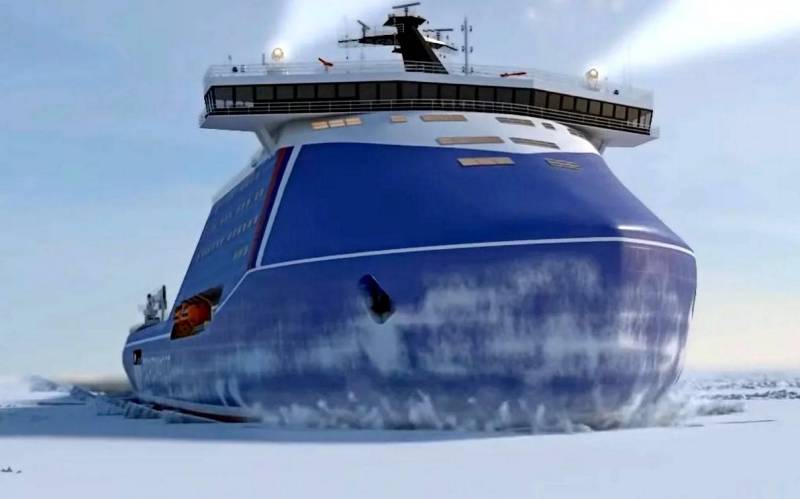 The shameless demarche of the US Navy destroyer USS John S. McCain, who violated the state border of our country in the waters of Peter the Great Gulf, was perceived in Russia with quite appropriate concern and indignation in this case. This trick of the American "sea wolves" is painfully similar to an open attempt to test the strength of our borders, and, first of all, the reliability of guarding the Northern Sea Route. Meanwhile, in the United States itself, representatives of certain circles are expressing concern on a completely different, one might say, diametrically opposite issue.


They are concerned about the very possible prospect of curtailing the US militaristic activity in the Arctic region, which allegedly may occur due to the coming to power of Joe Biden. Which of the two mutually exclusive scenarios seems more likely, and why shouldn't Russia, if it wants to maintain a dominant position in these extremely promising regions, should not “relax” in any case? Let's try to figure it out.

Quite indicative in this regard is the speech by Nick Solheim, who is considered a good specialist in the issues of the High North, published by the American edition of the National Interest. In any case, he is the founder of such an organization as the "Institute of Arctic Security named after. Henry Wallace ”, and he can hardly be considered a layman in matters that he undertakes to judge. So, Mr. Solheim is very concerned that the series of "brilliant actions" of Donald Trump in the Arctic may be interrupted after his departure from the White House. And in connection with the placement of a representative of the Democratic Party there, all the achievements of his predecessor, as the expert fears, may be nullified. What, in fact, are the successes in question in this context? Solheim assures that “in just four years, Trump has done more to strengthen the US position in the Arctic than any of the presidents since the end of World War II.”

I mean, as you might guess, first of all, the military aspect, and in no case questions of scientific research or even the economic development of the region. Indeed, the now re-elected head of state has made certain steps in this direction and tried to implement something else. So, it was Trump who announced the construction of at least six new icebreaking ships for the US Coast Guard over the next decade. He, I remember, was also talking about a larger-scale renovation of the American icebreaker fleet, which, it must be admitted, has come to a rather miserable state over the past decades. Also significant was the presence of the US armed forces during the numerous maneuvers carried out, mainly in the "run-up" to the Arctic, together with NATO allies - Canada, Norway, Denmark and Sweden, which "joined them".

The activities of Washington in the "Greenland direction" were no less lively under Trump. Persistent rumors that the president-businessman, accustomed to solving all important issues by writing a check with a large number of zeros, suggested that Denmark, in whose jurisdiction the island is located, simply buy it, are not unambiguous statements. The deal did not take place, but the Americans resumed the activities of their own consulate in Nuuk, Greenland and made significant investments in the local the economy - clearly not for charitable purposes. The US "friendship" with Iceland, which is a member of the North Atlantic Alliance, but does not have its own army, also intensified. But located in very attractive latitudes for Washington ...

However, it would be completely incorrect to say that all of the above has allowed the United States to “reverse the situation” in the Arctic region and on its borders, or at least significantly change the balance of power in its favor. Pentagon analysts (in particular, Air Force General Terrence J. O'Shaughnessy) stated in the spring of this year that the Arctic can no longer be considered a “fortress wall” protecting the West from “encroachments of insidious Russians”. They spoke of the urgent need for an accelerated build-up of American potential, both military and logistical, to "prevent the expansion that Moscow and Beijing are successfully pursuing in this region." Approximately the same point of view is shared by their colleagues from other countries of the North Atlantic Alliance, who consider Russia's position in the Arctic dominant.

The arena of confrontation not only between the USA and Russia

Norwegian defense specialists are less pretentious in their assessments, but more accurate and specific. For example, during a recent videoconference on security issues, State Secretary of the Defense Ministry there, Tune Skugen, bluntly stated that "Russia's actions in the Arctic are directly challenging NATO as a whole." According to the Norwegian military, the military capabilities of our country in the region are such that, if desired, it can easily "terminate the transatlantic connection", and also, even more unpleasant, "block the ability of the United States to send military reinforcements to Europe." Moreover, as Skugen admitted, during the same recent Ocean Shield exercise, "the Russians have convincingly demonstrated their own ability, if necessary, to isolate the entire Scandinavian Peninsula."

In general, according to Norway, "reliable containment and strong defense of NATO member countries", of course, "are guarantees of peace in the Arctic," but in which case the Alliance has no chance against the Russians. It must be said that not only Americans, Canadians, or, say, Scandinavians have been showing increased activity in this area recently. These can still be understood to some extent. But what have the Germans got to do with it? Be that as it may, but it turns out that back in 2019, an official document prepared by the German government and bearing the name "Directions of German policy in the Arctic ". And let no one be deceived by the fact that on many pages of this very voluminous program we are talking about "environmental protection", "nature conservation" and scientific research ... All this is followed by an extremely frank admission from Berlin that he intends to "take take responsibility for the Arctic space ”. This was just not enough!

When such statements are made by German politicians, Bundeswehr generals are already visible somewhere nearby. And sure enough, German Defense Minister Annegret Kramp-Karrenbauer has recently shown "Arctic concern" too vividly to be considered her personal initiative. The head of the German defense department, according to available information, once started a whole tour of the Scandinavian countries with the aim of forging a closer anti-Russian "polar alliance" with the participation of Denmark, Sweden, Norway and other "interested" countries, but the whole thing was ruined by the coronavirus pandemic. The militant lady had to confine herself to online conferences and publications in the Scandinavian press. In all cases (in particular, during videoconferences with the NATO Joint War Center in Stavanger, Norway), Kramp-Karrenbauer "promoted" the same idea: "Let's be friends against the Russians!" By the way, for about a year, the said center has been headed by Rear Admiral of the German Navy, Jan Christian Kaak, and there are quite a few other compatriots there. The Bundeswehr is also very active in any exercises conducted in the polar latitudes or in the immediate vicinity of them. Whether it's Cold Response 2020 in northern Norway or Dynamic Mongoose 2020 off the Icelandic shores, Germans are everywhere. But, of course, Russia is to blame for the “militarization of the Arctic” and “escalating the situation” around this region. And she will soon seize him completely - do not hesitate!

In any case, Nick Solheim, whom I mentioned at the very beginning of our conversation, scares readers of the National Interest with just such prospects. He is sure that at all times when representatives of the Democratic Party were in power in the United States, the topic of the Arctic was, as they say, “in the corral”. Natives of this political force "preferred to endlessly solve Middle East affairs", instead of taking care of strengthening the "bastions of the North." The United States was not even able to take advantage of the 2014 chairmanship of the Arctic Council, according to Solheim, finally "finding itself out of work" in this region. Ultimately, as the expert predicts, "The Arctic will be received by the one who moves first." And, of course, they will be Russians. The most remarkable thing about this reasoning is precisely the maxim that our country is going to “seize” or “appropriate” the Far North. The fact that this region is, without a doubt, the primordial Russian lands, is not recognized in principle by either the Americans or their NATO allies. Hence, all the essentially pointless talk about "free shipping", "equal rights to development" and the like.

However, the West has one last hope. At one time, again, under Donald Trump, Washington reacted extremely sharply to, as they put it, "China's unfounded claims to the status of a sub-Arctic power." Now, many Western leaders hope that these very "claims" will force Moscow to seek rapprochement with them - "in order to block the aspirations of an overly assertive Beijing." According to some local analysts, the Chinese will be able to compete with us in the Arctic Circle in 2030-2040. Representatives of the "world community" firmly believe that Moscow "will not tolerate a significant increase in the presence of the Middle Kingdom in the region" and will resist attempts to "transform the Northern Sea Route into the Polar Silk Road." They very much hope that the Arctic will finally become a "bone of contention", which will end the cooperation of the two powers, whose union in the West is feared more than anything else. Paradoxically, they are ready to see the Arctic as a Russian territory rather than an arena for cooperation between Moscow and Beijing. Obviously, due to the fact that just in this scenario, our Western "friends" will definitely have nothing to "catch" there.
Reporterin Yandex News
Reporterin Yandex Zen
2 comments
Information
Dear reader, to leave comments on the publication, you must sign in.