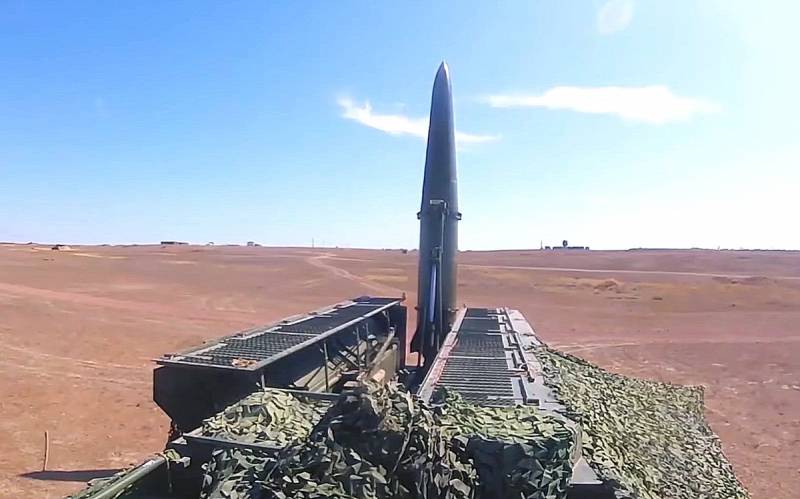 The US withdrawal from the INF Treaty made the Old World an incomparably more dangerous place than before. Now in Europe, American medium and shorter-range missiles may appear, to which the RF Ministry of Defense will be forced to respond symmetrically. In addition to ballistic missiles, one of the deterrents can be OTRK, which are not only designed to destroy command bunkers, missile defense and air defense systems, but are also capable of becoming carriers of tactical nuclear weapons.


Iskander is a whole family of operational-tactical complexes, the massive use of which is comparable to a NATO bomber raid. Due to the long range of missiles, their ability to overcome the missile defense system and the accuracy of hitting targets, this OTRK is considered one of the most formidable non-nuclear weapons in the RF Armed Forces. Two missiles of the modified Iskander-M, the quasi-ballistic 9M723 and the cruise 9M728, can destroy one target by flying up to it simultaneously from different directions. The only limitation was the range of the missile strike, limited to 500 kilometers under the INF Treaty.

But now there is no treaty, and both sides, the United States and the Russian Federation, can, without a twinge of conscience, build up their weapons capabilities. Amazingly, just four months after the unilateral withdrawal from the treaty, the Pentagon was able to "develop" and successfully test new medium-range ballistic missiles. Also, work was intensified to create an American analogue of the Iskander-M.

The US Army has an obsolete ATACMS (Army TACtical Missile System, literally Army tactical missile system) equipped with a short-range ballistic missile. According to its characteristics, it is seriously inferior to Iskander-M: the missile's flight range is 270 kilometers against 500, the weight of the warhead is 227 kilograms against 480, respectively. At the same time, the Americans themselves admit that the accuracy of the Russian complex is several times higher.

Now a new PrSM (Precision Strike Missile) OTRK is being developed to replace it. The launcher will be used the same, but the accuracy of the strike and its range will be significantly increased. Note that initially, the range of the missile system was limited to 499 kilometers, but immediately after the collapse of the INF Treaty, it was increased to 750 kilometers. Russian military expert Konstantin Sivkov suggested that the weight of the PrSM warhead could reach 450 kilograms, which is comparable to the Iskander-M, and the missile itself can also become maneuverable. This will create very big problems for us, since, according to the expert, the American OTRK can become a carrier of nuclear weapons:

It is possible that the Americans can put a nuclear warhead on their PrSM. For example, I believe that our Iskander must be equipped with a nuclear warhead, because given the superiority of the Americans and NATO in the air, only Iskander remains a reliable means of delivering tactical nuclear weapons.
It turns out that after the collapse of the INF Treaty, the importance of Iskander-M as a means of deterrence increases dramatically. Great hopes are pinned on the 9M729 rocket, which can presumably fly up to 2500 kilometers. It is reported that KB Novator is working on another seven new missiles for the Iskander. It can be assumed that in terms of their characteristics they will meet the new challenges of the time of “missile Europe” and will unpleasantly surprise the “supposed”, but in fact quite obvious adversary.
Ctrl Enter
Noticed oshЫbku Highlight text and press. Ctrl + Enter
We are
The scaled-down Iskander: What is the new tactical missile
What will Russia do when the ISS does not
Reporterin Yandex News
Read Reporterin Google News
5 comments
Information
Dear reader, to leave comments on the publication, you must sign in.