Turkey will create the most serious problems for Russia in Ukraine 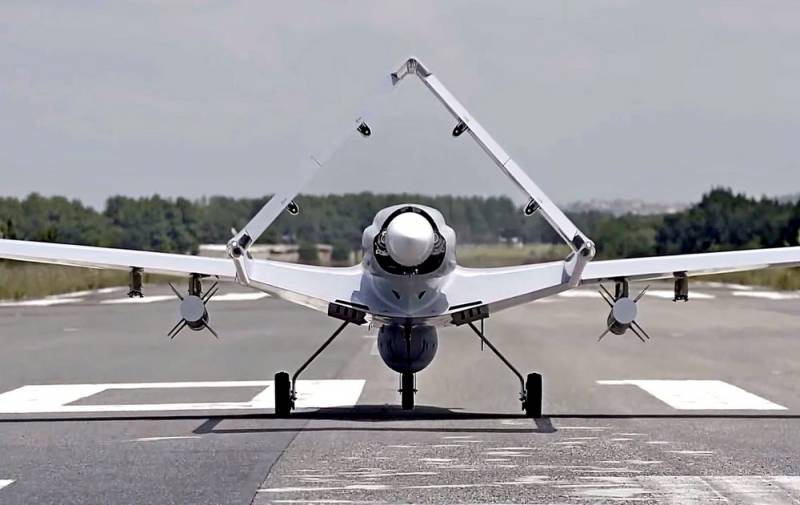 Arguments that since 2014, Ukraine from a relatively independent "post-Soviet" state has finally turned into a country under external control and is either a colony or a protectorate of its Western "friends" have long become a commonplace.


Recently, however, the fate of the "nezalezhnaya" is seen more and more clearly in the form of not even the backyards of the European Union or another "overseas territory" of the Anglo-Saxons, but one of the provinces of neo-Ottoman Turkey, which is rapidly "reviving" by Recep Erdogan. Don't believe me? It’s in vain, since this is exactly what everything is heading for — to the trouble of Russia.

Kiev Vilayet? Why not...

To begin with, there is nothing unusual or unnatural in Ukraine's stay under Turkish rule. Quite the opposite! You can say a historical tradition. This is some kind of Zambia or Tanzania that has never been and could not be either the 16th republic of the USSR, or the 51st state of the United States. For Ukrainian "patriots", the Turkish protectorate is a completely ordinary and normal thing. For a long time Bohdan Khmelnitsky was the vassal of Sultan Mehmed IV, who for some reason is mentioned in Russian historiography exclusively as a positive character. Many researchers believe that he planned to annex the lands subject to him, if not to Poland, then just to Turkey, but the "map went" so that everything ended in the Pereyaslav Rada and an alliance with the Russians.

However, one of his successors, Hetman Petro Doroshenko, went even further - thanks to him, the entire Ukrainian Podolia was under the rule of the Ottomans. In general, if you follow the historical truth, Turkey at one time owned more than a significant share of the territories of modern Ukraine - in addition to a significant part of the modern Vinnytsia and Khmelnichy regions, we are talking about almost all the lands that are now part of the Kherson, Nikolaev, Odessa regions. The Poles managed to dislodge the Turks from somewhere, but the main part of the above-mentioned areas was liberated from them exclusively by the forces of the regular army of the Russian Empire after long and bloody wars. And, by the way, here's another thing - all the agreements, according to which the Ottoman Empire lost these lands, were concluded not with Ukraine, which did not even exist in the factory at that time, but with Russia ... occupation "and a complete rejection of the" Soviet and imperial past ", in principle, can give rise to quite interesting legal incidents and conflicts.

At the same time, one should remember the main thing: the main geopolitical enemy of Turkey, which held back its expansion and mercilessly broke all imperialist plans, from time immemorial was precisely Russia. Has anything changed currently? What is exceptional is that today the vital interests of the two countries enter into insoluble contradictions not only in "traditional" regions such as the Caucasus, the Black Sea region and Central Asia, but also in the Middle East and even in North Africa. Ankara simply will not be able to further develop its own global pan-Turkist project without “removing” our country from the road. To inflict such a serious and shameful defeat on Moscow that it once and for all renounced attempts to prevent Ottoman expansion is the main dream of all Turkish "strategists". At the same time, those who make such plans are well aware that their implementation can be very, very expensive - both with the military and with economic points of view. It is precisely because of this that Ukraine is perfectly suited for the role of a “small change” in such a risky game.

Already now it is in great dependence on the "Turkish partners" and this dependence is growing before our eyes, and in a geometric progression. Can things come to full control of Ankara over the "non-zalezhnaya"? Why not? And there is no need for any occupation - it is quite possible to do this, for example, by putting in power one of the representatives of the "Crimean Tatar people", with whom they continue to be worn in Ukraine today. It is unlikely that it will be Chubarov or Dzhemilev (although this is not completely excluded), rather, someone less odious, but completely controlled by Ankara. Impossible, you say? Are you serious - after the election of a clown head of state ?! In today's Ukraine, with the real desire of external players, even a trained dog can be made president. Do the people of Kiev vote over and over again for Vitali Klitschko, approximately equal to that in intelligence (with a preponderance in favor of the animal, of course)? They will also vote for the Crimean Tatar candidate - how cute ...

Dead Donbass under the wing of Bayraktar?

The most promising theater where the “proud descendants of the Janissaries” can try to give Russia a “decisive battle” is the Donbass. Yes, Crimea, from the point of view of Ankara, is of much greater interest. But the Turks are not crazy and not suicides to shove headlong into the peninsula, which is one of the most fortified and prepared for defense bases of our navy and army? It is not for them to storm the "security belt" around Nagorno-Karabakh. And in general, they expect to get their own in the Crimean direction in a slightly different way, which I will mention below. The east of Ukraine is preferable for the Turkish side for a number of reasons. First of all, let's remember that the Turkish Bayraktar TB2 UAVs, which received excellent advertising on a global scale thanks to the events in the Caucasus, have been in service with the Armed Forces of Ukraine since March 2019. It seems that it is with their help that Kiev intends to repeat Baku's success in the "return of the occupied territories." And here the interest of the two countries is mutual.

Having intervened in the Nagorno-Karabakh conflict, Turkey received as a "response" from the numerous and influential Armenian diaspora, whose representatives are scattered throughout the world, an embargo on the supply of components for its "miracle weapon", a good (if not more) half of the components and assemblies which are of import origin today. Partial, at least, the transfer of the production of drones to the territory of "non-existent", where, in cooperation with Ukroboronprom, the release of their new generation - Akinci is to start soon, will give Ankara, firstly, an opportunity to get away from the sanctions, which have already been announced by many Western companies ... Secondly, it will open access to engines produced at the Ukrainian Motor Sich, and, most likely, to others. technology, still available "on the bottom" of the remains of the local military-industrial complex. Thirdly, it will provide another "testing ground" for winged assassins, where the residents of Donbass and its defenders will be targets ...

The possible "bonuses" for the Turks are far from being exhausted on this. In fact, they are just getting started! In the event of a successful (in the eyes of the "world community") "de-occupation" of Donbass, Ukraine intends to deploy large-scale "restoration work" there. Their cost is estimated by both Ukrainian officials and Western economic experts in a very wide “fork” - from 10 to 20 billion dollars. It is clear that there is no such money in the "non-cash" and cannot be. However, they are seriously counting on "assistance from international financial donors." Well, perhaps, something through the EU or the IMF will be thrown ... It is on this very money that the Turks have set their sights. A fairly large-scale road repair is underway in Ukraine today.

The great thing is that the money for this event in the amount of about 100 billion hryvnia (approximately 270 billion rubles) is allocated from ... a special fund formed to fight the coronavirus! The lion's share of these funds is used by Turkish companies such as Ozaltin, Akelik, Mega Yapi and others. It was to control whether the promised "maximum favored nation" regime was granted to these firms that Turkish "criminal boss No. 1" Sedat Peker came to Kiev in the first decade of October this year. In addition to the "shooters" with "fellows in the shop", this criminal leader, well-known throughout the "post-Soviet space", also held meetings with Ukrainian government officials and politiciansIncidentally, Pecker cannot be called an ordinary, even a high-ranking bandit. At home, he is considered a kind of "connecting link" between the most powerful criminal clans and the Turkish establishment, up to the government and the president of the country. There is no doubt - in addition to resolving issues "by concepts", this authority also fulfilled the "state order" of Ankara. The very fact that this mission was entrusted to the mafiosi says a lot about the attitude of the Turkish side towards the Ukrainian ...

The Turks, whose economy is now literally drowning in the most severe crisis, expect to make good money on the "de-occupation" of the East of Ukraine and its "restoration". And as for Crimea ... Having "pressed" on Russia in the Donbas direction, inflicting a serious military defeat on the local forces there according to the "Karabakh scenario" and putting Moscow in front of a real threat of the destruction of hundreds of thousands of local residents by Ukrainian punishers, Ankara may well expect to start a very cunning bargaining ... No, no one will even raise the issue of returning the peninsula to Kiev! Rather, we will be offered the creation on its territory of a kind of "autonomy of the Tatar people" modeled on Kosovo, which, later, having received recognition from Turkey, Ukraine, and then the West, will very quickly turn into a quasi-state under Turkish control and an excellent NATO base. This is just one of the options, in fact, of course, there may be more. Turkey is by no means going to "recapture" Crimea for Ukraine. Exclusively - for yourself.

The most unpleasant thing is that every single one of the above probabilities is 100% satisfied with our Western "friends". "Nezalezhnaya" with its eternal problems and claims has long been fed up with them. No one in Europe or the United States intends to invest money there, because it is useless due to total corruption. In the West, it would be great pleasure to get away with such a problematic "asset", but to whom? Russia? China? These options are, of course, categorically unacceptable for the "world community". To suffer further on your own? If Turkey gets involved in the matter, while not only preserving, but also significantly strengthening the anti-Russian vector of Ukraine, it will most likely be allowed to do absolutely whatever it pleases there. They will also provide all-round support - within reasonable limits, of course.

Having shown during the Nagorno-Karabakh conflict its effectiveness in the "post-Soviet space" in actions directed against our country and its allies, Ankara may well count on the fact that the "non-leased" will be given to her "at the mercy". Most likely - under the strict supervision of one of the "senior comrades", the same Britain, for example, but with maximum freedom of action. And then really big problems await us ...
Reporterin Yandex News
Reporterin Yandex Zen
11 comments
Information
Dear reader, to leave comments on the publication, you must sign in.