Turkey's aggressive policy put an end to the Altai tank 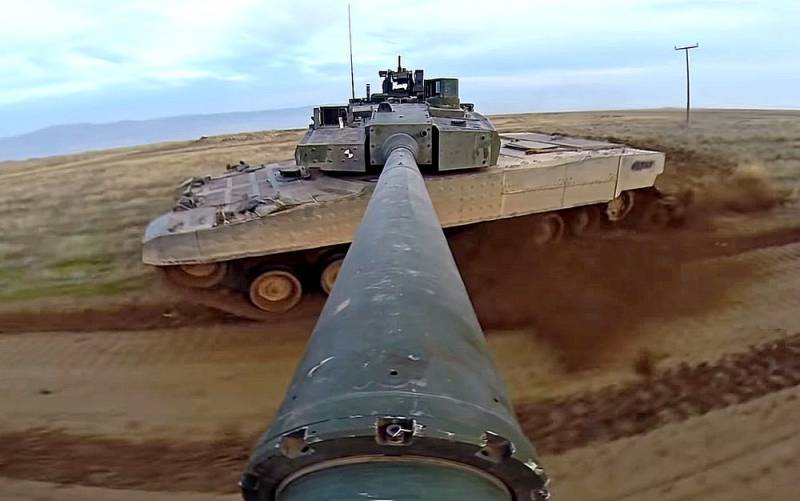 Turkey is pursuing an increasingly active expansionist policies in the territories that once belonged to the Ottoman Empire. The revanchist sentiments played by President Erdogan demand more and more victories and symbols of renewed power. These symbols include the ambitious Turkish military programs of attack UAVs, its own fifth generation fighter and the "national" tank "Altai".


However, if you take a closer look, the greatness turns out to be somewhat “exaggerated”. Yes, Turkish UAVs are knocking out machinery the enemy on the battlefield in batches, but it is easy to see that the Bayraktar TB series drones, which have become famous recently, have Israeli roots: a lot has been borrowed from the IAI Heron and Aerostar drones. The fifth generation Turkish fighter TF-X (Turkish Fighter Experimental) cannot be created on its own, Ankara is forced to look for partners in Sweden, Italy, South Korea and even Brazil. Equally great is the dependence of the Turkish military-industrial complex on foreigners in the project of the “national” tank “Altai”.

Currently, the Turkish army uses German and American tanks, but in 2011 a project of its own main battle tank was presented. The MBT has nothing to do with our Altai, the tank is named after a Turkish military hero. Despite its patriotic swing, due to the lack of experience in tank building, Ankara was forced to turn to other people's technologies. The German corporation KMW refused to transfer the license for its Leopard 2, so the Altai is 60% a modernized but simplified South Korean tank K2 Black Panther. Hyundai Rotem was then a partner. It was supposed to create several versions of the combat vehicle: 250 units of T1, T2 with improved armor and even T3 with an uninhabited turret and automatic loader.

But then problems arose. The Turkish "national" tank, in addition to the Korean genes, was to be equipped with a German RENK transmission and an MTU Friedrichshafen turbodiesel with a capacity of 1500 hp. Armor for MBT was supposed to be made in France. However, Ankara's relations with Berlin and Paris have deteriorated sharply in recent years due to Turkey's intensified aggressive foreign policy in the Eastern Mediterranean and the Middle East. Presidents Macron and Erdogan have become almost the worst enemies, and Germany has joined the anti-Turkish arms embargo. The former empire does not have enough power to cope with these technological problems.

There is one more curious nuance characterizing the internal politics of modern Turkey. The MBT project was developed by Otokar, which created several of the first prototypes of the tank. But after the tender of the Ministry of Defense for the production of MBT, the Turkish-Qatari company BMC Otomotiv Sanayi ve Ticaret unexpectedly won. The multibillion-dollar government contract went to a company whose shareholder is one of the members of the Justice and Development Party of Recep Erdogan. In addition, the state transferred to BMC Otomotiv Sanayi ve Ticaret a whole military plant for the next 25 years free of charge. It also happens.


However, for some reason the change of the general contractor did not lead to a technological breakthrough. Now Turkey is forced to turn to the South Korean Hyundai Rotem for help, which was at the origin of the project. It is reported that in parallel negotiations are underway with the Korean engine manufacturer Doosan and S&T Dynamics, which deals with automatic transmissions. Ankara expects to make only tank armor on its own. In fact, the output is a South Korean tank with production localized in Turkey.

However, the question is not entirely unambiguous. On the one hand, the technological and production capabilities of modern Turkey clearly do not correspond to its swing towards a new empire. On the other hand, the military expansion of Rome at one time was built on borrowing the best weapons from their opponents. If the Koreans help the Turks, Ankara will receive its conditionally own main battle tank in a couple of years, which is not something outstanding, but it will be able to fulfill the tasks assigned to it. However, it will no longer be an advertised "Altai", but a different combat vehicle.
Ctrl Enter
Noticed oshЫbku Highlight text and press. Ctrl + Enter
We are
Russia could solve the problem of Turkish UAVs in Karabakh in one day
Turkish fifth-generation fighter can get Ukrainian engines
Reporterin Yandex News
Read Reporterin Google News
10 comments
Information
Dear reader, to leave comments on the publication, you must sign in.