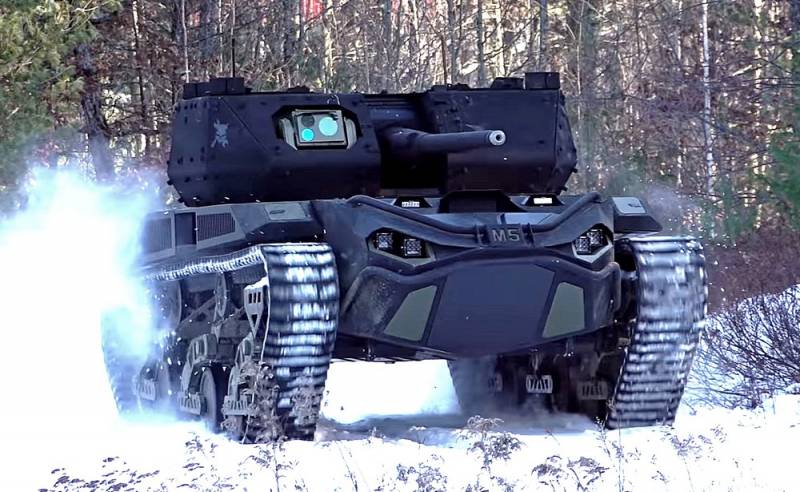 While the domestic military-industrial complex is engaged in the Armata platform, the main distinguishing feature of which is an uninhabited tower, the Pentagon has chosen to take a different path. In the United States, work is underway to bring combat robots of all classes, from light to heavy, to the battlefield. And this creates big problems for our "Armata", and not only for it.


A specialized American edition of Breaking Defense came out with a publication about a very interesting project called Mission Enabler Technologies - Demonstrator. On the basis of the M113 armored personnel carrier, the US Army Research Center created the so-called Robotic Combat Vehicle (RCV). If successful, this experimental prototype could become the progenitor for a whole family of robotic combat vehicles. What are they working on now for the Pentagon?

The US military is completely changing the approach to armored vehicles. The solid size and heavy weight of any combat vehicle is a requirement for ensuring the safety of its crew. By making the turret uninhabited, Russian developers were able to reduce the number of tank crew members from four to three. The US intends to create a completely uninhabited tank, thereby reducing armor thickness, size and weight equipment, fuel consumption, and speed will also increase. The weight of the lightest reconnaissance vehicle in the planned family can be only 7 tons, the average - 20, the heaviest - 30 tons. The armament will be, respectively, a small-caliber cannon plus a machine gun or a medium-caliber cannon, supplemented by a large-caliber machine gun. They will not be able to pierce the armor of the "Armata", but these are, perhaps, all good news.

Samples of military equipment for testing advanced technologies
The main changes are the approach to the management of military equipment. At this stage, it is assumed to be remote. The operator remotely controls the armored vehicle using an optical-electronic tracking system, he also gives the command to open fire. Radar is not used to reduce the visibility of the combat vehicle. But this is today, and tomorrow the robot on the battlefield will be controlled by artificial intelligence (AI). Project participant Colonel of the US Army Chris Orlovsky explained:

Remote control is good; it works fine if you have the right radios and the right environment, but in the long run when these environments are tested I think remote control will become less viable and we will have to really push automation and autonomy on these platforms.
Transferring control of military equipment to AI is an extremely difficult task. It is necessary to teach the robot to recognize targets, interact with other armored vehicles and units on the battlefield, support them with fire, move using terrain folds and other shelters. However, the Americans are already doing this work: over 3,5 million different images were analyzed to create the recognition algorithm. Unmanned vehicle systems are already available and are being tested on the roads. It remains to train the artificial intelligence to independently make the decision to open fire, which is a little scary to imagine. In addition, in the future, a combat robot may be equipped with its own UAV, it is not yet known, just a reconnaissance or reconnaissance-strike, which will increase its capabilities.

Alas, we are lagging behind again. We have not yet heard about combat robots with AI. Several years ago, only the remote-controlled Uran-9 robotic complex was developed, but it proved to be very unconvincing in trials in Syria. Problems were identified with control, low speed, low firepower and reliability of the gun, as well as the inability to fire on the move. In open sources, it is reported that these problems have been eliminated, but today this robot is of no real interest to the military. Taking into account the direction of the potential adversary's design thought, it is necessary to change the approach to the development of artificial intelligence for the needs of the Russian army. Otherwise it will be too late later.
Ctrl Enter
Noticed oshЫbku Highlight text and press. Ctrl + Enter
We are
Weaknesses of American Laser Weapons Named
Defense Express: Russian tank Armata has Ukrainian roots
Reporterin Yandex News
Read Reporterin Google News
70 comments
Information
Dear reader, to leave comments on the publication, you must sign in.