Russia is preparing "vaccinations" not only against coronavirus, but also against "color revolutions" 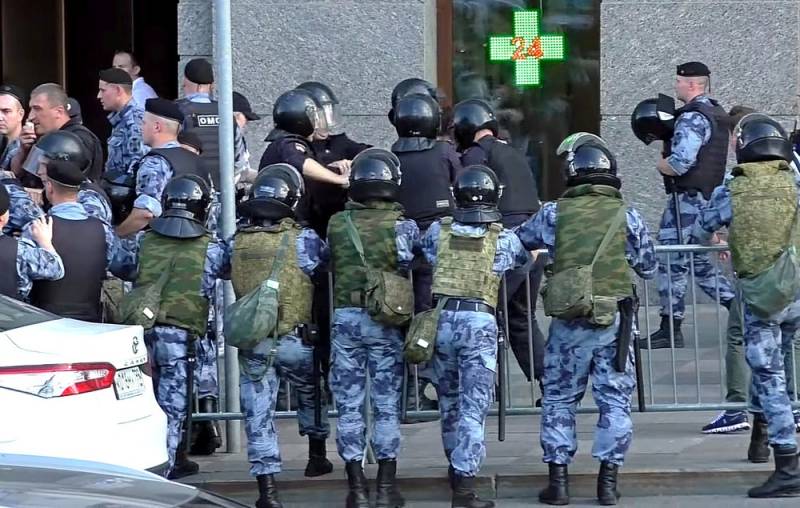 Usually, speaking about issues of national security, we mean exclusively those aspects of it that are directly related to the activities of our military-industrial complex, the defense department and other "power structures." At the same time, everyday practice convincingly shows that today the main weapon of the West in its activities aimed at conquering and maintaining dominant positions in the world are not ballistic missiles and multipurpose fighters at all.


First of all, these are tools for organizing in countries with undesirable for the "world community" leadership, conducting "wrong" external and internal policies, well-known to all of us "color revolutions". The events in Belarus are the freshest confirmation of this.

Consequently, the “cutting edge” of the defense of the sovereignty and independence of our Fatherland runs not only along our external borders, but also has an “internal contour”, which is perhaps even more difficult to defend. Recently, the State Duma of Russia has approved or adopted for consideration a number of bills that, at first glance, are not directly related to each other, but clearly pursue the same goals. It seems that our legislators have finally decided to recall those aspects of ensuring Russia's national security, which for a long time remained beyond their attention. Well, I will repeat it again: better later than never ...

A fairly extensive list of innovations in the field of domestic legislation, which are still being discussed and analyzed in the expert environment, mainly individually, can now be conditionally combined into several different "clusters". The first of them is, of course, amendments to the Constitution and related amendments to the federal law “On Security”. Among them, the main ones seem to be the points that finally consolidate the secondary nature of the decisions of various "interstate bodies" in relation to the Basic Law of our country and the refusal to comply with them if they conflict with national legislation and the national interests of Russia. No less significant is the ban on the presence of any funds (in the form of accounts, deposits, etc.) in foreign banks outside our country for the leaders and permanent members of the domestic Security Council. It was high time ...

Generally speaking, the Kremlin's recent policy of completely "cutting off" high-ranking domestic politicians, and even more so, civil servants, from any foreign ties that can be used as leverage to influence them, is undoubtedly correct, perhaps pretty much a belated measure. The same applies to the bill submitted to the State Duma by Olga Savastyanova, Pavel Krasheninnikov and Andrey Klishas, ​​which states that no person who had a foreign citizenship or residence permit in the past can run for the presidency of Russia. categorically. Well, we are not Moldova, in fact, we should be ruled by the president with a Romanian passport in his pocket!

Unlike the first group of laws, which, so to speak, have a global scope and concern, for the most part, the "top officials" of the country, another, and a very extensive part of them is aimed at further restricting the possibilities for interference in our internal affairs from - abroad. I think no one will argue that this is being done in a number of areas - from open demarches by foreign leaders and structures (the same US State Department, which regularly deals with such cases) to well-disguised subversive companies in which the "first violin" is played by various, seemingly , non-governmental and non-profit organizations. It is high time to deal with them, operating on the territory of Russia, but by no means in its interests. And not just for show, but really, thoughtfully and, I'm not afraid of the word, biased. The first step in this direction (again, not that overdue, but “overripe”) was the adoption of the Law “On Foreign Agents”.

Nevertheless, the realities of life quickly showed that the legislators worked on this topic, extremely painful for our country, rather superficially. First of all, it is an omission that only the media and non-profit organizations that have a legal entity can be assigned the low-respect status of foreign agents. Or individuals who distribute information from such media outlets for foreign money. The bill, sponsored by Andrey Klimov and Vasily Piskarev (this document was supported, by the way, by representatives of almost all Duma factions), proposes to significantly expand the list of potential foreign agents. These include, for example, politicians who receive funding from abroad (it does not matter at all how long and intricate the chain of intermediaries is), as well as those who are caught trying to collect information of a "military-technical nature" , which can later be used to the detriment of Russia's interests. Naturally, in those cases when these actions will not "pull" the articles of the Criminal Code of the Russian Federation on espionage and treason. However, this is just the beginning ...

No less remarkable innovation proposed by the draft law under consideration is the introduction into our political life and, above all, various kinds of elections of such concepts as “a candidate being a foreign agent” and even “a candidate affiliated with a person performing the functions of a foreign agent”. Were you a member of an NGO with the appropriate status a couple of years before joining the election race? Worked in a recognized inoagentom media? Or at least were politically active, receiving money from someone in this category? Now let me inform your own electorate about this everywhere - from election posters to signature lists. Yes, not in small print somewhere in the far corner of a bright leaflet, but so that the corresponding text occupies at least 15% of its area! So that everyone knows who exactly they are invited to vote for ...

And, by the way, for “highly intelligent citizens” who decided to get rid of the shameful stigma by renouncing the legal entity (as, for example, the Voice Association recognized by the foreign agent did, which quickly “repainted” out of harm's way into a “social movement”), a surprise is also prepared. There is a legal entity, there is no legal entity ... Now it does not affect anything. You take money from foreign organizations and citizens - welcome to the ranks of foreign agents with all the ensuing consequences in the form of mandatory reporting and appropriate notifications in the same media publications. What is especially pleasing, for individuals recognized as foreign agents, the road to the state and municipal service will be closed tightly. On this, however, the future misfortunes of those who are eager to "equip Russia" according to the templates and manuals of Western curators are far from being exhausted. With the organization of their favorite "mass protest events", at which such a wonderful "picture is made" for the foreign media (and at the same time for reporting to the owners), they too may soon have big problems.

This should be facilitated by the draft law recently introduced to the State Duma by the chairman of its committee for the development of civil society, United Russia party Dmitry Vyatkin. This politician proposes to strictly prohibit financing of any public events not only to foreign citizens and organizations, but also to all NGOs recognized by foreign agents. And at the same time - to citizens of Russia under 16 years old and structures, from the moment of state registration of which has not passed even a year. Would you like to financially support a demonstration, rally, picket or something similar? No question - transfer money to a special account, but certainly with the indication of the most detailed data about yourself. Applies to both individuals and legal entities. According to Vyatkin, more than generous "injections" into domestic "protests" that are regularly carried out because of the cordon, he sees as "gross interference in the internal affairs of Russia." And he considers this to be unconditionally subject to suppression once and for all. It must be said that while working out his own proposals (and he submitted a number of bills to the Duma for consideration), Mr. Vyatkin approached the issue seriously and went into the matter to the finer points.

For example, he considers the urgent need to resolve issues related to the activities of media workers during various mass demonstrations of citizens. On the one hand, since you are present there as a representative of the "fourth estate", then cover, and do not get into the thick of events, and even with one or another slogan. It's like with the notorious flies and cutlets: protests are separate, and journalism is separate. On the other hand, it is high time to put things in order in the issue of the real belonging of certain persons to the journalistic corps. And then today the leading microblogging with a dozen subscribers already undertakes to declare himself a "shark of the pen" and requires an appropriate attitude, and, most importantly, status. The scope for speculation is vast. It's time to decide something about this.

The very same Vyatkin, among other things, is sure that rallies and other processions with picketing a priori cannot be held near the places where those whom he classifies as “emergency services” are accommodated. In this case, we mean not only law enforcement officers, but also ambulance doctors, as well as other representatives of organizations, whose employees have to respond to calls from citizens in a matter of minutes and seconds - firefighters, the Ministry of Emergencies and the like. There shouldn't be any events that can paralyze their work near such institutions. Also, local authorities are encouraged to delegate the right to urgently cancel even permitted public events in the event that credible information is received at the last minute about the danger of a terrorist attack or other emergency at the location where the gathering of citizens is supposed to take place.

As you might guess, all these innovations have already served as a reason for an extremely harsh reaction on the part of the domestic liberal-democratic "get-together". It is understandable - "an encroachment on sacred rights and inalienable freedoms"! In fact, the vast majority of legislative innovations, if they really encroach on anything, then only on the incomes of this extremely dissatisfied with the forthcoming blow to their own welfare, calculated in dollars and euros. "Fiends, satraps, stranglers ... They don't let them sell their homeland!"

If you look closely at all the initiatives mentioned above, as well as a number of other similar ones, which I simply did not mention here due to lack of space, then they are nothing more than the fruit of a creative understanding of the extremely sad experience of the same Ukraine and Belarus, where there is nothing similar in they didn't bother to do their time. The results are well known. The "Maidan" virus, which is no less harmful than COVID-19, alas, is persistently trying to bring it to Russia. It's time to make a reliable vaccination from him at the level of legislation.
Ctrl Enter
Noticed oshЫbku Highlight text and press. Ctrl + Enter
Reporterin Yandex News
Reporterin Yandex Zen
21 comment
Information
Dear reader, to leave comments on the publication, you must sign in.