Our response to Erdogan: What Russian systems put an end to the domination of UAVs 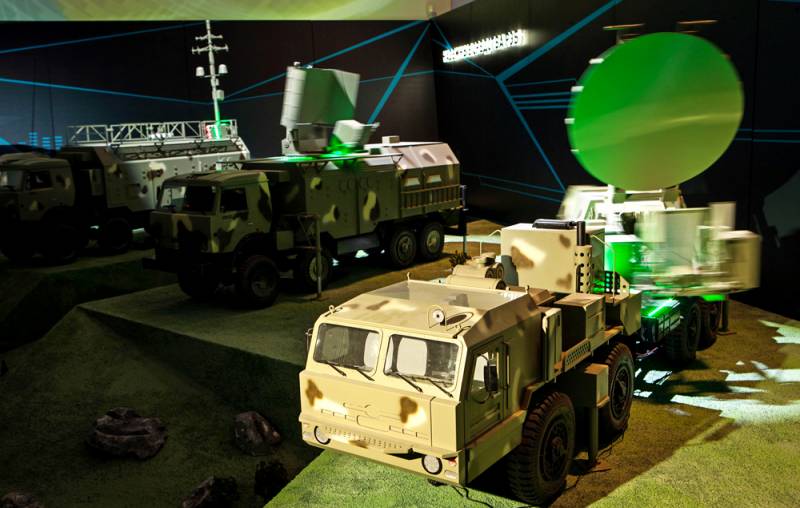 The latest events in Nagorno-Karabakh have revealed to the whole world a fact, previously obvious only to specialists, that in the 21st century the war of motors is giving way to a war of wings and of technologies... Just as in the 17th century it was foolish to fight with a bow and arrow against smooth-bore and rifled firearms, and in the 20th to throw cavalry against machine guns and tank strike groups, so in the 21st century, tanks and MLRS of Armenians were powerless against UAVs of the Turks and Azerbaijanis.


The conduct of modern combat has moved to a new technological level, people have been replaced by machines, deserted technologies can reduce human losses, and as a result, we have come to the conclusion that it is not the bravest one who wins, but the smartest, not by number, but by skill. Actually, this was also confirmed by the Syrian military campaign, when the Russian Federation was able to turn the negative course of the war for Assad with limited air resources. Now, for the conduct of hostilities, it is not even necessary to have a personal presence on the battlefield. A computer and a joystick are enough to inflict damage on the enemy without even going to war.

Is Russia ready for new realities? What can we oppose to new technologies when drones (from the English drone - "drone") and loitering shells (kamikaze drones) decide the outcome of a war? Believe me, we have something to oppose them, and this is not only "Krasukha-4", which everyone has probably already heard about.

"Krasuha" (developed by VNII "Gradient") - a family of electronic warfare (EW) complexes, refers to stationary electronic suppression (REP), is designed to cover command posts, groupings of troops, air defense systems, important industrial and administrativepolitical objects. The complex analyzes the type of signal and acts on the enemy's radar with jamming radiation. Suppress spy satellites, ground radars and AWACS aircraft systems. The radius of action is 150 ... 300 km. All other performance characteristics are classified. 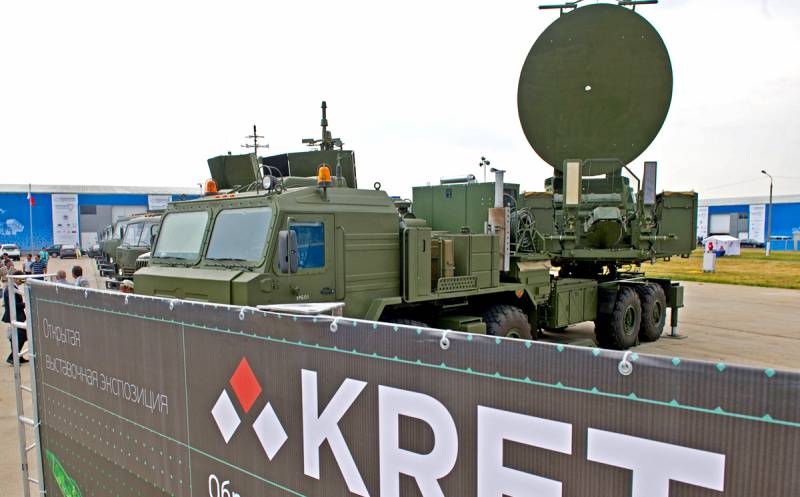 Complex of electronic warfare "Krasukha-2". Photo: Rostec
The development of the Krasukha complexes began in the mid-1990s. Simultaneously with the 1RL257 "Krasukha-4" complex, the 1L269 "Krasukha-2" system was developed. The complexes differ from each other in the composition of the equipment used ("Krasukha-2" is made on analog equipment, "Krasukha-4" on digital), characteristics and chassis used. The Krasukha-2 complex is mounted on the BAZ-6910-022 four-axle chassis (three vehicles in the complex), the Krasukha-4 - on the KamAZ four-axle chassis (two vehicles). The information allowing to compile a detailed list of differences between the complexes is also classified. Combat use: a military operation in the SAR - protection of the Khmeimim airbase, the war in Karabakh - protection of the 102nd base. 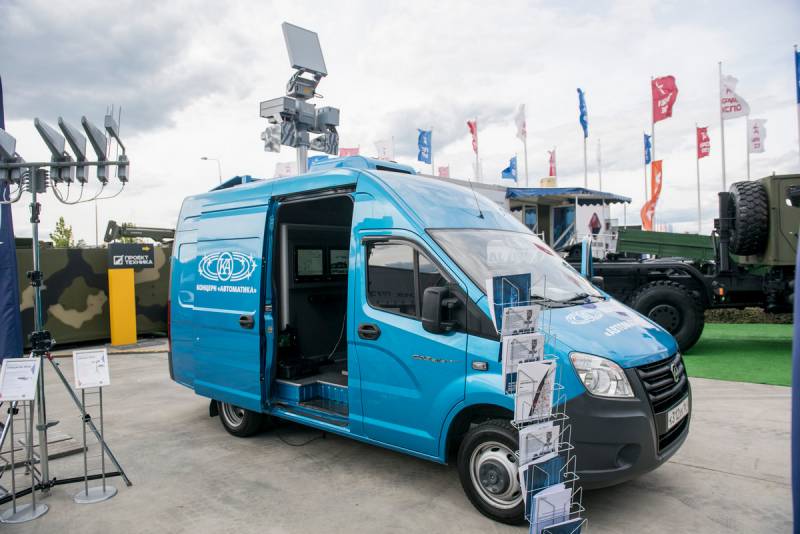 Complex for countering drones "Sapsan-Bekas". Photo: Anton Tushin / Rostec
The stationary electronic warfare system also includes the system "Sapsan-Bekas" (developed by the Avtomatika concern, part of the Rostec Group of Companies) - a mobile multifunctional complex using both passive and active detection means. In addition to radar systems, the complex includes optical-electronic surveillance equipment for drones, a visible spectrum video camera and a thermal imager. Drones recognition range by optical means up to 4 km. The range of suppression of control and navigation channels of unmanned aerial vehicles is up to 4 km, depending on the configuration and appearance of the protected object and tactics of use. In addition, the complex can act as a target designation tool for other electronic warfare and air defense systems, conduct circular observation or scan a given sector. 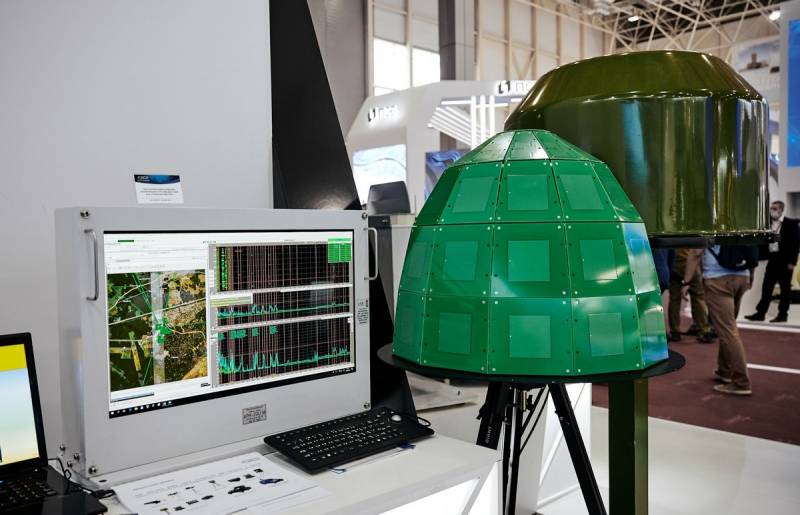 Mobile automated complex for countering drones "Rubezh-Avtomatika". Photo: Viktor Molodtsov / Rostec
Another development of this concern "Rubezh-Automatics" - Rostec's response to the growing problem of terrorism using drones is intended for civilian customers. The product ensures the safety of social and sports events, industrial enterprises and facilities of the fuel and energy industry. The range of the "Rubezh" can reach 30 km. 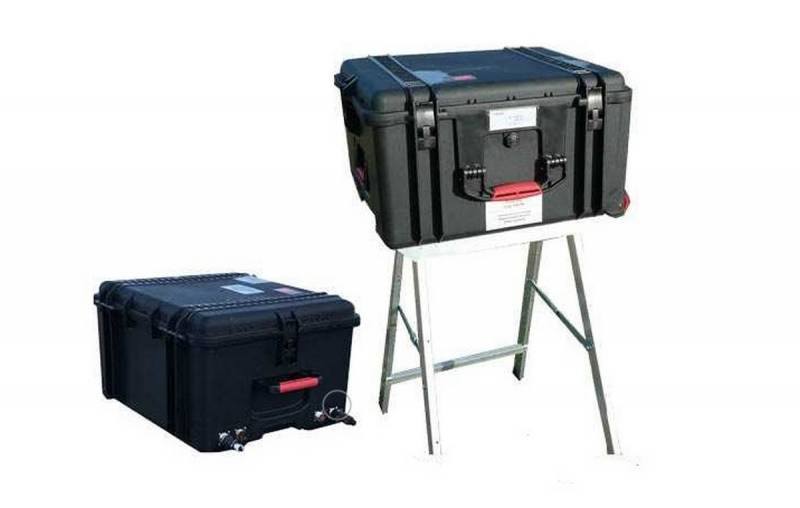 The transported UAV countermeasure complex "Bastion-Avtomatika". Photo: Concern Avtomatika
For military needs, the concern offers a transportable anti-UAV anti-aircraft complex "Bastion-Automation"designed for continuous radio surveillance, detection of signals from unmanned aerial vehicles and generation of counter signals. At the same time, the analysis of the signal from the drone is carried out in an automatic mode, means of identification "friend or foe" are being introduced, which allows the object to be protected without the participation of operators. 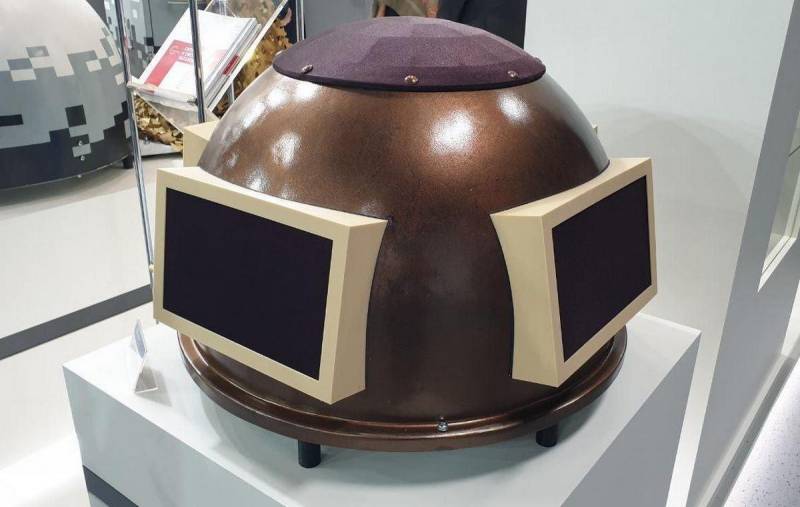 Acoustic reconnaissance module "Ataka-Shorokh". Photo: Ruselectronics
Another association of Rostec State Corporation, Ruselectronics, also has a wide range of anti-UAV solutions. A new acoustic reconnaissance module was presented for the first time at the recent exhibition "Interpolitex-2020" "Attack-Rustle"... The equipment is designed to protect civil and special objects from unauthorized entry of drones flying in radio silence. The module is equipped with ultra-sensitive microphones that allow you to locate an approaching drone. The detection range of drones depends on the level of ambient noise - for example, in a city the range of the equipment is 100-150 m. The required number of modules and their locations are determined depending on the characteristics of the protected object. 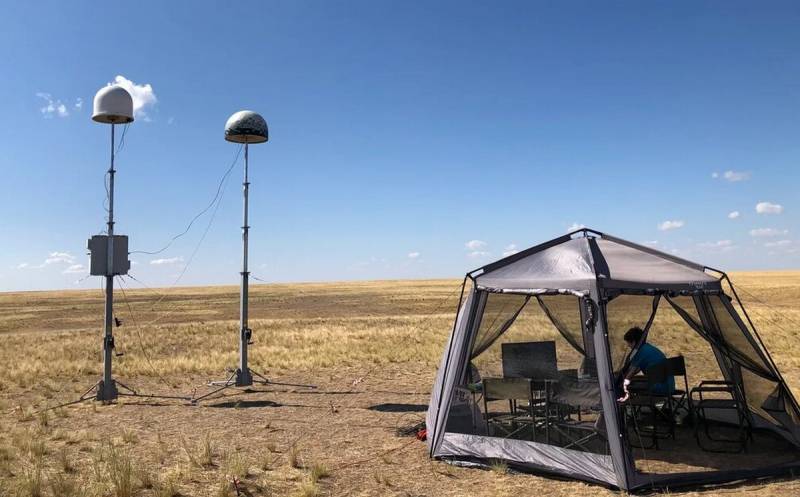 System of countering drones "Attack-DBS". Photo: Rostec
Recently, tests of the modernized complex for countering civilian drones were successfully carried out "Attack-DBS" using a new type of antennas. The results showed that the range of the complex increased almost 2 times in terms of detection and 2,5 times in terms of suppression. The complex is based on radio frequency detection and suppression modules. The equipment is capable of automatically detecting a drone within 0,1 seconds, identifying an object according to the "friend or foe" principle, blocking its communication and navigation channels. 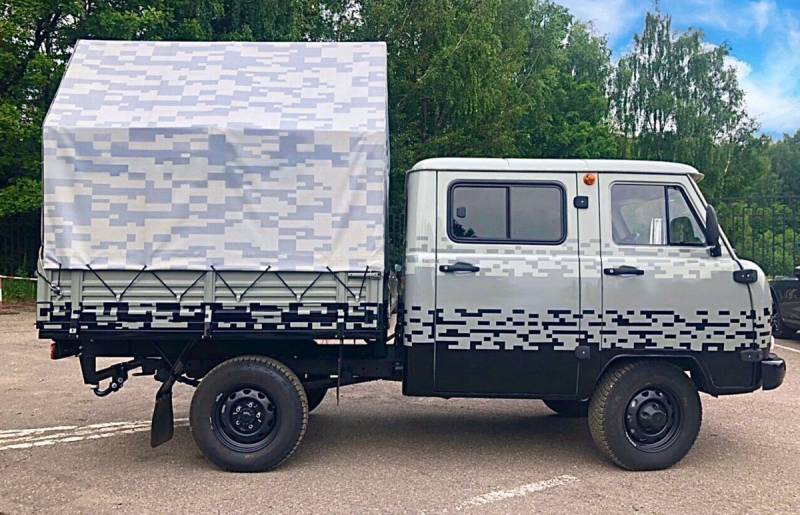 Mobile complex with high cross-country ability to counter drones "Attack-Trophy". Photo: Ruselectronics
On the basis of the UAZ off-road vehicle, Ruselectronics has also created a mobile version of the UAZ countermeasures complex "Attack-Trophy"... The complex can, without the participation of the operator, identify the drone according to the principle of "friend or foe" and automatically prevent unauthorized entry into the protected area. The deployment time of the complex is 5 minutes. The peculiarity of "Attack-Trophy" is that it can work "on wheels", without preparation and installation of equipment. A dual-use product for both military and civilian needs (protection of industrial facilities, critical infrastructure, crowded places). 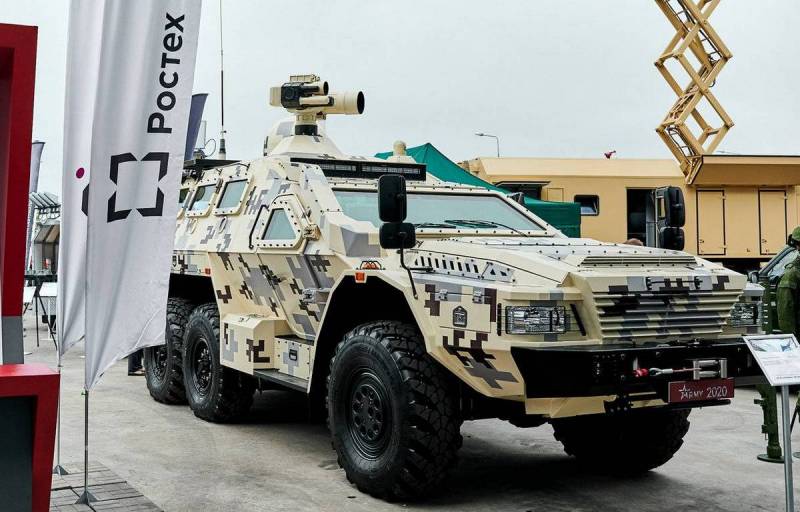 Anti-UAV complex "Rat". Photo: Rostec
The next product of Ruselectronics is intended exclusively for the needs of the military. Multifunctional mobile complex to combat drones "Rat", demonstrated at the end of August at the Army-2020 forum, made a splash there. The Rat was created on the basis of a special armored vehicle and is equipped with a full range of drone detection and suppression equipment to protect critical objects from unauthorized UAV intrusion. The novelty includes a radar station, a complex for automatic recognition and suppression of telecommunication channels, a system of directed ultrahigh-frequency (microwave) suppression and a system of directed laser destruction. All equipment is integrated into a single intelligent system for collecting, processing and displaying information.

Data from the means of detection and observation are sent to the central control panel, the system processes the target parameters and offers the operator several options for further actions. The complex detects drones at a distance of up to 3,5 km, carries out directional suppression of UAV control channels within a radius of up to 2,5 km. In case of an unauthorized intrusion of several objects, it blocks their communication and satellite navigation channels. The operator of the complex can also physically destroy the drone using a system of directed laser radiation.

Now the developers of Ruselectronica are working on a new system called "Aegis", which, using special software, will be able to distinguish an aircraft-type drone from a helicopter and aerostatic one, which will allow predicting its landing trajectory after the drone's communication channel with the control point is interrupted. After that, the drone that has lost control can be quickly found and its purpose found out. In addition, the system will be able to counter UAVs that even use an encrypted communication channel or jam their signal.

We figured out the stationary objects, but how to protect the column on the march? Can't you carry a Rati for each BTG (battalion tactical group)? 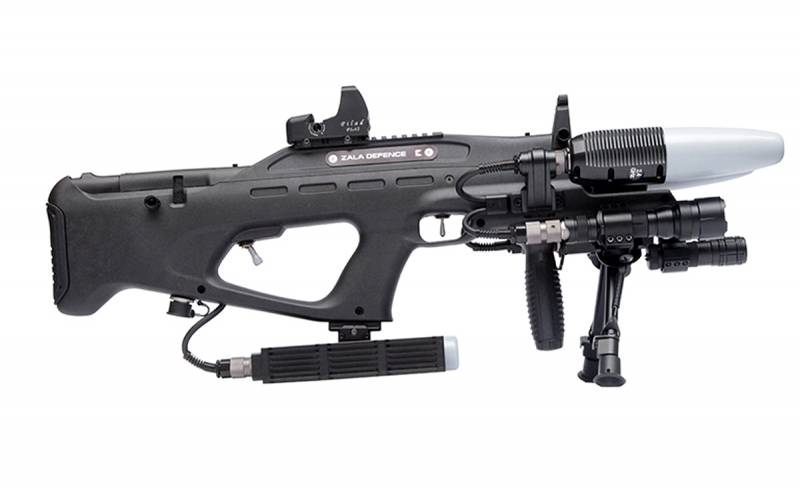 Electronic gun REX-1. Photo: ZALA AERO
And here the Kalashnikov concern comes to the rescue. Electronic gun REX-1designed by Izhevsk designers Zala Aero Group effectively protects against light drones. The weapon is built on a modular basis and can be assembled for specific tasks. Simple pictograms on the modules facilitate assembly: the "quadrocopter" suppresses the control and information transmission channels of the drones, the "satellite" extinguishes the navigation systems, the "antenna" - Wi-Fi channels, and the "phone" - mobile communications. The REX-1 can also be used to detain intruders: a laser and a strobe will blind and disorient a potential terrorist, and electronic countermeasures will prevent him from contacting accomplices or transmitting a signal to an explosive device. The REX-1 will not be superfluous if it detects suspicious objects: it blocks radio communication, and you can safely wait for the arrival of the sappers. 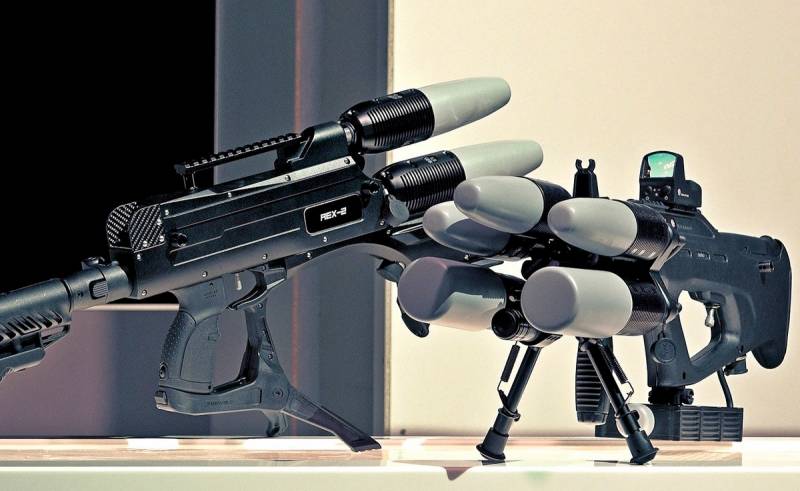 Electronic shotgun REX-2. Photo: Rostec
Now the series is being launched REX-2... This system is the most compact in the world as it is based on a pistol. At the same time, all the characteristics of the basic sample - the REX-1 gun are preserved The REX-2 is equipped with a replaceable set of modules for jamming radio and satellite navigation signals for controlling drones. As a result of optoelectronic jamming, operators lose control of the drones. 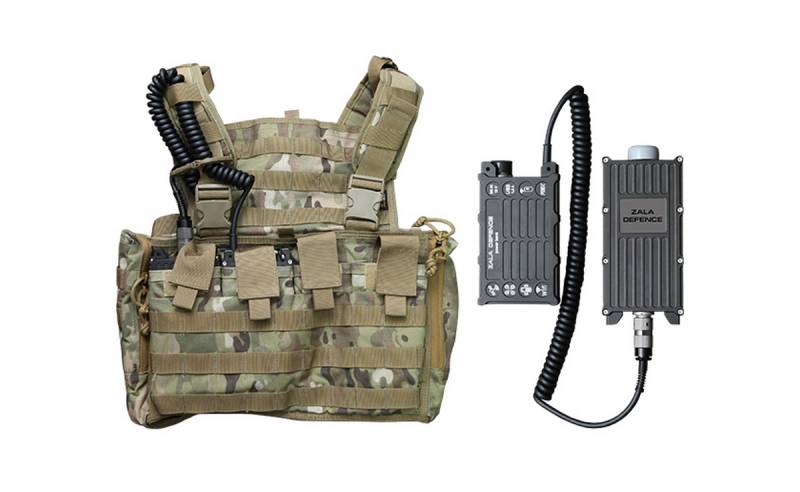 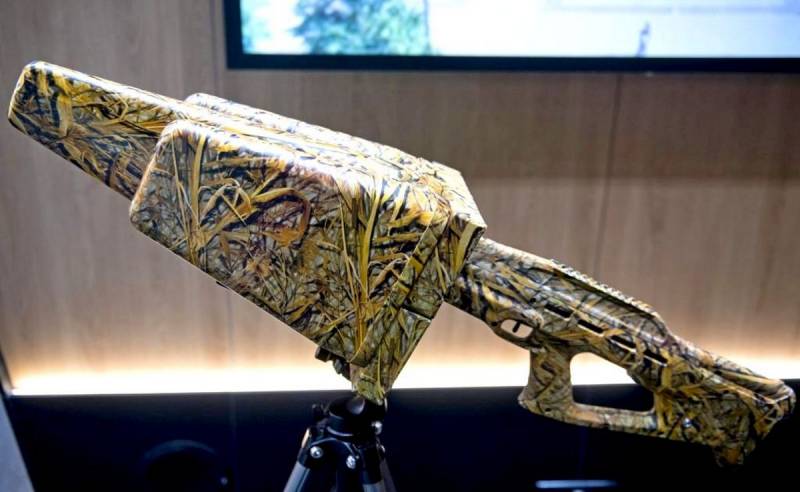 Complex of suppression of communication channels "Pishchal-PRO". Photo: Rostec
The already mentioned specialists from the Avtomatika concern are not lagging behind their Izhevsk colleagues. They offer their development for these needs. "Pishchal-PRO"that looks like a gun. It does not require any special operator training or special technical knowledge. Seeing the target, the operator simply pulls the trigger, and the radio-electronic impact begins immediately. The drone is suppressed means of communication, control, navigation. The drone seems to be in a state of prostration. And heavy aircraft-type UAVs simply fall. 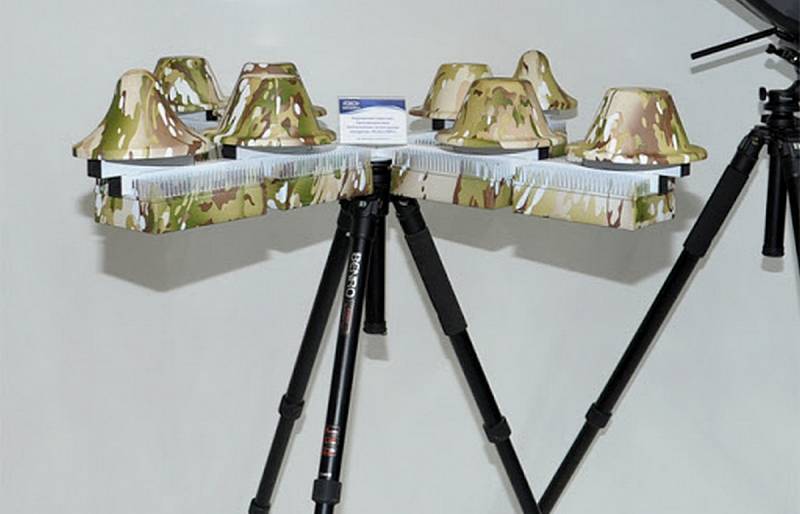 "Kupol-PRO" portable UAV countermeasures system. Photo: Concern Avtomatika
Another mobile portable interference device is Kupol-PRO, made in the form of quick-assembly units, allowing one person to assemble and disassemble the product within three minutes. The device acts by means of a protective electromagnetic effect on the on-board electronic subsystems of the drone, due to which they become inoperable. 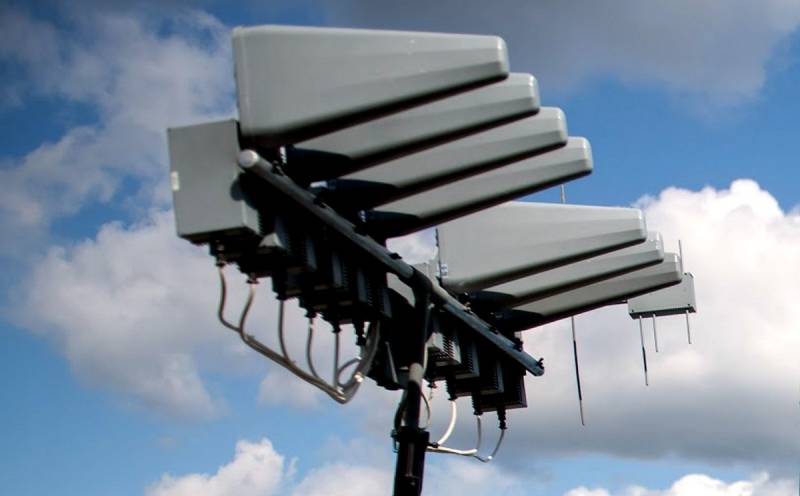 "Luch-PRO" UAV detection and counteraction complex. Photo: Rostec
The third representative of this family is a portable UAV detection and countermeasures complex Luch-PRO - can be deployed within five minutes and applied even from unprepared positions. It detects drones and creates interference suppressing control and navigation channels in a given sector at a distance of at least 5 km.

As you can see, our developers did not waste time, standing on the sidelines of technological progress, but paid serious attention to the means of combating the bites of modern "drones", offering the Ministry of Defense and civil customers a large number of effective means of countering these mechanical "insects", both intelligence and shock.
Ctrl Enter
Noticed oshЫbku Highlight text and press. Ctrl + Enter
Reporterin Yandex News
Reporterin Yandex Zen
27 comments
Information
Dear reader, to leave comments on the publication, you must sign in.