"Internal Affairs of Turkey". Ankara is looking for ways to gain a foothold in Nagorno-Karabakh 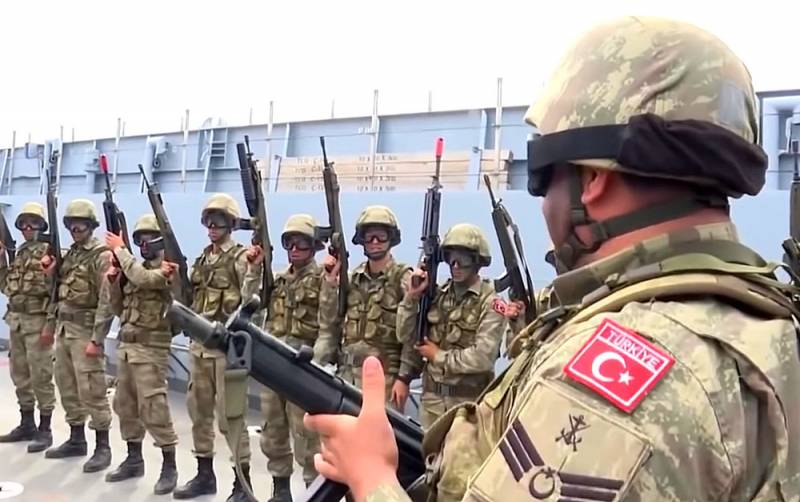 Only a week and a half has passed since Armenia’s surrender in Nagorno-Karabakh, but Moscow’s position on this issue has managed to transform quite strongly, demonstrating surprising flexibility. To quote literally the press secretary of President Putin Dmitry Peskov, it turns out that Azerbaijan is now also Turkey.


No sooner had the ink dried on the agreement on a ceasefire and the deployment of Russian peacekeepers, when President Aliyev announced that the Turkish military would be present in Nagorno-Karabakh along with ours. The Ministry of Foreign Affairs of the Russian Federation denied this with anger, and all the “sofa experts” on social networks agreed with him in the comments. Then it turned out that the Turkish authorities were completely in solidarity with the position of Baku and raised the issue of bringing their army into the territory of Azerbaijan. The corresponding resolution was adopted by the Parliament of the republic, and it was ratified by President Erdogan. Dmitry Peskov, the "voice of Putin", spoke about this curiously, calling it "Turkey's internal affair":

The fact is that there will also be a monitoring center on the territory of Azerbaijan, the Turkish military must be sent there - this is the implementation of internal procedures, procedures provided for by the internal legislation of the Republic of Turkey. This is Turkey's internal affair.
An interesting twist. It turns out that now sending the Turkish military to Azerbaijan is an internal matter of Turkey, and not Azerbaijan, which is regulated by Turkish legislation. Of course, we can say that we cling to words, and the press secretary just made an annoying slip of the tongue. According to Freud.

It would be rather naive not to notice that Azerbaijan has already quite firmly fallen into the arms of the "Sultan" Erdogan. This state is number one in the list for integration within the framework of building the so-called "Turkic world" under the auspices of Ankara. The two countries are closely cooperating in the field of energy; Azerbaijani gas is supplied to Europe through Turkey. Last September it became known that the largest Turkish refinery STAR refused to use Russian Urals oil. The nuance is that this plant was opened by the Azerbaijani SOCAR in 2018. After the defeat of Karabakh, Ankara got the opportunity to build a railway through the Armenian and Azerbaijani territories, which would connect Turkey with the Caspian Sea, turning it into a "logistics superpower".

Turkey has a powerful military-industrial potential, which we also use. We are very pleased that Turkey today produces the most modern weapons and military machinery... I am sure that in the near future Turkey, as in all other spheres, will become our number one partner in the field of military-technical cooperation.
During the war lost by Yerevan, the greatest damage to the Armenian troops was caused by Turkish attack drones, which, apparently, were operated by Turkish officers. The latter also appear to have planned military operations. It was Ankara's intervention that radically changed the balance of power in the region and allowed Baku to win a crushing victory in just a month and a half.

"Sultan" came to Azerbaijan seriously and for a long time. Of course, the Aliyev clan will not surrender its power to the "Turkish brothers" so easily, but this is not yet required of it, it is enough to follow the course policy Ankara and get your gesheft from this. The Kremlin made another geopolitical mistake by not intervening in time in the conflict. We are not talking about the direct participation of the Russians in hostilities: it was possible to supply the most modern air defense systems, as well as organize a Syrian counter-offensive against Turkish positions in Idlib in order to slightly cool the ardor of the "Sultan". They did not, instead, now almost two thousand Russian military will sit in a "stone sack" in Nagorno-Karabakh on a thin supply line that can be easily cut off at any moment. How many will they fight there in case of anything, the big question is if they are left without ammunition and fuel and lubricants supplies and will be hammered by shock UAVs. This "fun" can be started by terrorists transferred from Idlib, who managed to get their hands on the attacks on the Khmeimim airbase.

By the way, about the UAV. Turkey is creating a kind of monitoring center in Karabakh, from where its officers will monitor the situation in the region with the help of drones. What kind of UAV it will be is not announced, it is possible that reconnaissance and shock. According to the head of the Russian Foreign Ministry, the departure of the Turkish military to the territory of Nagorno-Karabakh will be limited to the boundaries of this center. However, it seems that Ankara has its own opinion on this matter. The Turkish Foreign Ministry is already talking about some additional "observation offices in the field". I would like to know who or what will prevent Baku from allowing their appearance on its territory? Or already in "Turkish"?
Reporterin Yandex News
Reporterin Yandex Zen
12 comments
Information
Dear reader, to leave comments on the publication, you must sign in.