Russia is not losing the post-Soviet space, but reformatting it for itself 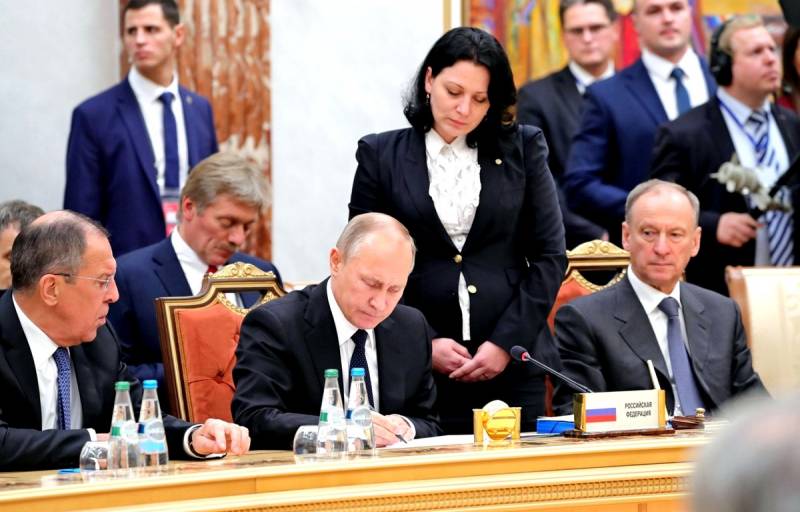 A number of difficult events that have taken place and are taking place now in various countries of the former USSR, some experts, both in the West and in our country, took it as a pretext for allegations that Russia “surrendered its positions in the“ post-Soviet space ”. Some agreed and added to the point that Moscow "completely lost influence even on those states that until now were in its geopolitical orbit." I mean, as you might guess, there was Belarus, Armenia, and after the recent presidential elections - and Moldova.


However, is everything as simple in each of these cases as it might seem at first glance? How unambiguous is the “loss” of our country and does it even have a place to be? Let's try to understand the examples of each of the above-mentioned "post-Soviet" states, especially since passions are still boiling in the first of them, in the second the most dramatic events, I would like to believe, are behind, and in the third, it is quite possible that everything is just beginning .. ...

Whom to change "at the crossing"?

It is a geopolitical axiom that the powers claiming the status of the world are trying to defend their interests in “third countries”. And all those who do not want, sooner or later, to face extremely unpleasant "surprises" in their own home, are simply obliged to observe them in neighboring countries. Aspiring to the role of "world hegemon", the United States has never even particularly concealed the fact that it is completely normal practice for them to change presidents and governments at their own will, as well as other authorities in the regions located on the completely opposite end of the globe. Usually this was done by organizing "color revolutions", accompanied by bloodshed and cataclysms of various degrees - up to civil wars and the complete collapse of the statehood of the peoples "blessed" in this way. Russia, of course, has never undertaken anything like this, even among its closest neighbors. These are not our methods ...

However, no matter how bitter it is to admit, the real mechanisms of counteraction technology The State Department, the CIA and other similar "offices", cunningly operating around the world under the "roofs" of various NGOs, either did not bother to work out in our country, or they simply failed. Moscow's main foreign policy method in this regard was to establish the closest possible ties with the leaders of the "post-Soviet" states most acceptable from its point of view and to maximize their involvement in economic cooperation on the most favorable terms for them. Alas, such a strategy, in my opinion, which completely proved its absolute inconsistency even on the example of Ukraine, gave an equally serious failure in the Belarusian direction.

Played in policies “Both ours and yours”, carried out, as the lawyers say, “out of selfish motives”, Alexander Lukashenko has become almost an enemy of our country and along the way has successfully brought his own state to the brink of an abyss. Acting on the envy of the "specialists" from the Soros funds, he created all the conditions and preconditions for the "Maidan" in it, which did not hesitate to happen. The most unpleasant thing is that even now, when Minsk continues to stir up mass protests that have not grown into something much worse, largely due to the timely intervention in the situation of Moscow, the "dad" is again trying to "ride his beloved skate" and broadcast something about the "price of refusal from a multi-vector policy ", which, of course, for some reason our country has to pay ... Twenty-five again ?!

The situation with other states, about which we are talking about, should be viewed from approximately the same angle. Being a "Maidan nominee", that is, a politician, a priori not too acceptable for the Kremlin, Nikol Pashinyan, nevertheless, in no way felt a chill on the part of Russia after his coming to power. Economic ties were not severed, cooperation in the military-technical field, extremely beneficial for Yerevan, continued, first of all, the supply of the latest models of combat aviation. And what is the result? Not only did this figure manage to get involved in a military conflict with Azerbaijan (for which, as it turned out later, the country was completely unprepared), but in the process he allowed himself to completely ignore Moscow's proposals, having fulfilled which Armenia would have gotten off with much smaller losses and shame than it happened in reality. Instead of following sensible peace initiatives, Pashinyan made every effort to draw our country into hostilities, hoping to either hide behind its "back" or blame his own failure on her. Fortunately, nothing came of it.

Those who today argue that Igor Dodon's defeat in the elections in Moldova is a "foreign policy fiasco of Moscow," which thus "lost its protégé in Chisinau," very much flatter the ex-head of state who "flew" past the presidency. In reality, Dodon did absolutely nothing - both to bring the two countries closer together and to strengthen any positions of Russia. As far as I remember, he promised to return schooling in Russian? So what? In fact, apart from a multitude of empty phrases about “Moldovan-Russian friendship,” which in reality did not result in an increase in either the economic or political presence of Moscow in Moldova, he was not doing well. Oh, yes - it seems that he recognized Crimea as ours ... And even then - "de facto". Great service, nothing to say! But by his own spinelessness, inability to make the final choice between East and West, as well as a multitude of rather “muddy” stories with his participation, this politician has considerably compromised both the Socialist Party associated with him and the entire “pro-Russian” camp in principle.

The fact that Moldova has perceptibly “swayed” in the western direction in the current elections is precisely his “merit”. So far, we have not lost anything there. Rather, they got it. First of all, the possibility of another reformatting of the country by the hands of the Moldovans themselves, which seems almost inevitable. For all his good-hearted intentions and enticing promises, Sandu should remember that Chisinau will most likely celebrate the New Year with an absolutely empty treasury. So it’s very good that by this time not Dodon and his party members will be in power there, but completely different people. Before the next early Moldovan elections, Moscow will just have time to establish cooperation with much more promising candidates and candidates for support than those who have not justified either the trust or the assistance provided.

Aleksandr Grigorievich will also have to leave his post with all his "multi-vector" manners, whether they are wrong. Naturally, he should not do this under any pressure from the "Maidan", but also not on a command coming directly from Moscow. Themselves, themselves, themselves ... The task of the Russian leadership here, again, is to control the political processes in Belarus, as a result of which there should be someone who, at least, will not repeat "wagging" and Lukashenka’s maneuvers, but will clearly move towards strengthening the Union State. And Aleksandr Grigorievich, who has collected all the “negativity” from his compatriots today, will, some time later, turn again in their eyes into an all-Belarusian “dad”, whose reign will be remembered with nostalgic breath. But it will be later ... For now, Moscow should focus on ensuring that the transit of power in Minsk proceeds without incidents and in the right direction. One to one, the same can be said about Armenia.

The fall of Pashinyan is no longer a subject for discussion, but simply a matter of time. A corresponding statement about the absolute inevitability of his resignation and the holding of early parliamentary elections in the country was made yesterday by President Serzh Sargsyan. Pashinyan and his supporters in Yerevan have no political future and cannot be any more - a lost, and even with such shame, the war leaves no chances even for politicians much more serious than him. It is not for nothing that Vladimir Vladimirovich in his last speeches, not at all sparing the pride and reputation of the Armenian prime minister, speaks as lucidly as possible about how many times his stubbornness prevented the conclusion of peace with Baku on much more favorable terms. Is Putin "drowning" Pashinyan? And what, should have saved ?! With what, excuse me, joy? The head of our state once again makes it clear that he does not see him in the role of the leader of Armenia. And the point.

Thus, if we do not consider the recent events in the “post-Soviet space” from an extremely straightforward and, therefore, extremely simplified point of view, then the question of whose interests its next “reformatting” is taking place remains open. Russia is not the United States, and it does not allow itself actions that indicate its direct interference in the political processes going on in the neighborhood. Nevertheless, in the end, everything can (and should) work out to the greater benefit of our country. In any case, in the Caucasus, having openly entered into business literally at the last moment, Moscow not only avoided possible problems with both of its main partners there - both Yerevan and Baku, but also significantly strengthened its own military-strategic presence in this key one for our geopolitical interests of the region. Moreover, such an unprecedented diplomatic success today causes clear irritation and open envy in the West. Russia has shown extremely convincingly that it is capable of solving regional conflicts, at least on its borders, without any of his participation. And this is also a significant achievement.

In any case, lately Moscow has gained certain opportunities and chances, and has not “surrendered” any positions. Will the opening prospects be used to the full, including for the transformation of the "post-Soviet space" into a geopolitical zone, where the priority will be the influence of our country? Time will tell, but today all the conditions for the development of events in this direction are definitely there.
Reporterin Yandex News
Reporterin Yandex Zen
10 comments
Information
Dear reader, to leave comments on the publication, you must sign in.