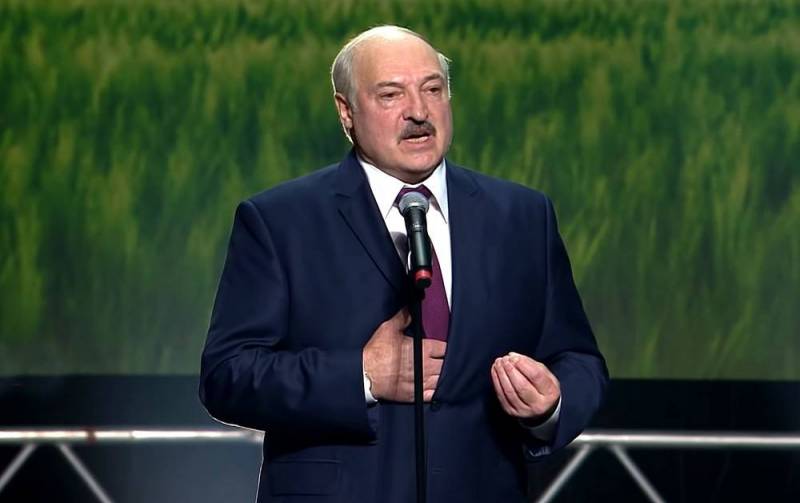 Another round of "weekend protests" in Minsk and other cities of the country ended with practically the same results as all similar events that have been going on since the beginning of August. Continuing to remain dissatisfied either with the results of the presidential elections, or with life in general, the citizens gathered, made some noise, wandered around and went - some to their homes, and some to the nearest regional police departments to reflect on their own behavior ...


According to various estimates, law enforcement officers detained from 400 to 900 people. The "wave of popular anger" promised by Tikhanovskaya and the company, which was supposed to "sweep away" someone there, marking a radical change in the dynamics and scale of the protests, did not happen. Nevertheless, certain changes in the situation both in Belarus itself and around it are still taking place.

The "sacred sacrifice" ... which was not there?

The main hopes for this weekend "opposition" pinned on the event, which it, no doubt, has been waiting for a long time, and most likely, carefully prepared. In the present circumstances of the death of 30-year-old Minsk resident Roman Bondarenko, there are too many oddities and controversial points. And in the history of his “heroic death”, which has already become “canonical” for all local “oppositionists,” there is such a number of outright exaggerations and manipulations that all this makes us seriously think about a planned provocation. Provocation, which, alas, was a success and cost the life of the young guy. But the protesters now have a "hero and martyr", in whose memory they call to turn the whole country upside down - well, so that the death toll of such Romanovs as in Ukraine goes to hundreds and thousands. At the same time, what is interesting, many media outlets, both Western and neighboring countries with Belarus (first of all, the same “non-existent” one), without any embarrassment, spread the most complete lie as a proven fact. They write that the unfortunate man was “killed by the security forces” (tortured in a pre-trial detention center, tortured to death in the ROVD - underline the necessary).

Even the most shameless Belarusian “Maidan people” are forced to admit that the young man died after a conflict with unidentified persons dressed in civilian clothes and wearing masks, just as 99% of the world's population is forced to do at the moment. At the same time, an extremely important moment is missed - the "unknown guy" who, in fact, provoked the scuffle, as a result of which Bondarenko received serious bodily injuries, then disappeared, disappeared, disappeared, as if he had never existed! From this one provocation carries literally a mile away. But the mysterious disappearance of the instigator is only one detail of many. In fact, in the myth, born through the efforts of the leaders of the "Belomaidan", almost everything is a lie.

Not a single screen has survived from the “last message” of the deceased, allegedly sent in the messenger: “I'm leaving!”, From which “fighters against the regime” are now trying to sculpt a new cry and slogan for the broad masses. But it should have remained in the correspondence of those to whom it was addressed ... All widely circulated "opposition" telegram channels and mass media "medical documents" allegedly received in the hospital where Roman was delivered and where he died, and "evidencing the absence there is alcohol in his blood ”- linden of the purest water. Either blank forms grabbed in the bustle of the admission department, or their scanned copies - without real signatures, seals and stamps of the medical institution. Video recordings "from the scene", in which absolutely nothing can be made out, except that in some courtyard between some people there is a scuffle (besides, not too fierce). Let's be frank: you never know such "courtyard showdowns" happen almost every day - what in our country, what in Belarus, which is somewhat more prosperous in terms of criminality? But no - from the incident (tragic, ridiculous, terrible) they are trying hard to make another “crime of the regime”. The one whose representatives were not even close at the scene of the incident.

Yes, today law enforcement officers are dismantling "spontaneously arisen people's memorials", and the ill-fated courtyard, to which someone has already rushed to assign the pathetic name "Square of Changes", is being "cleared" and without hesitation. And rightly so. Let me repeat myself, but the extremely sad experience of Ukraine proves that if we allow those who are now speculating on the death of a guy to win, clearly and unswervingly following the same guidelines that were used in 2014 in Kiev, there will be much more deaths and grief in Belarus. In any case, the death of Roman lies not on the conscience of Lukashenka or his supporters, but on those who, since August, have been trying to push the country into the chaos of the “Maidan”. Apparently, the absolute majority of Belarusians are aware of this, and therefore no "explosion" happened on November 15.

Are there many of you? So talk!

Meanwhile, Svetlana Tikhanovskaya, whom, apparently, even with her greatest desire, the owners simply will not allow her to deviate from the course assigned to her "from above", continues to behave as if Belarus is indeed engulfed in a "people's war", and Lukashenko, besieged in her residence, is about to shoot the last machine gun shop ... Some of her statements make you think deeply about the adequacy of this person. For example, the words that the "national strike", with which she, I remember, tried to intimidate Alexander Grigorievich, "completely fulfilled its task." How so ?! According to Tikhanovskaya, "people reacted well and demonstrated their attitude." In general, it was so, but at the same time it would be worth mentioning that no “all-Belarusian strike” took place even close. Nevertheless, the "president Sveta" continues to bend her own way and even, as usual, tries to set conditions for Lukashenka "to start a dialogue." The main one of which, of course, is the departure of the legitimate president from his post and the transfer of all power to the hands of the "Maidan".

In the camp of those, by the way, there is a lively squabble about the "dialogue" (which, presumably, will never begin). For example, "oppositionist" Yuri Voskresensky, who left the pre-trial detention center by the grace of Lukashenka and therefore imbued with the idea of ​​cooperation with the authorities, declares that he is in contact with the "Coordination Council" Tikhanovskaya in the process of working on the amendments to the Constitution initiated by the "father". In the "KS" itself, they deny anything of the kind in the most resolute manner, declaring that they themselves are the only "correct" "negotiating body", and all the rest are "political impostors ". Indeed, when some crooks call others impostors - that's something! Lukashenka, on the other hand, approaches all this swarming from the standpoint of the hero of the well-known joke: “What do you want! - Talk! - How many of you are there? - A lot of! "Talk to each other ..."

However, Tikhanovskaya, alas, does not confine herself to clarifying relations with her colleagues, or, rather, competitors in the struggle for the attention and money of the West. The inclinations of such a petty, but very vicious Fuhrer in this bile lady are making themselves felt more and more clearly. Quite recently, she made another batch of inflammatory appeals to the Belarusian law enforcement agencies. And it must be said that her current ideas are quite "pulling" to initiate a criminal case. And for such a luxurious "bouquet" of articles of the Criminal Code that it will take your breath away. “President Sveta” in her irrepressible fervor reached the point where she demanded from the Belarusian “siloviks” to “capture or neutralize Lukashenka and his accomplices,” whom Tikhanovskaya, of course, declared a “terrorist organization”. Those people in uniform who commit such a "feat", which is actually nothing more than treason and a military coup, are promised "amnesty" by the "oppositionists" during the upcoming "people's tribunal". That is, to put it simply, a "revolutionary" lynching. Condescension can also be shown to law enforcement officers, who immediately, right now, will engage in denunciation of their own colleagues and "collecting evidence of their crimes against the insurgent people." This is, in all seriousness.

To collect this kind of libel and slander, the "opposition" promises to launch a special system "Report" on the Internet, where those who wish can "merge" the necessary video materials "behind closed doors." Obviously, remaining anonymous for everyone except the "revolutionaries", from whom they will be able, like all Judas, to count on a certain amount of silver coins. However, most likely, under the cover of this new "information channel" will simply cook and spread the next provocative fakes.

Tikhanovskaya never gets tired of asking the West for more and more sanctions against Belarus. She would like very much that, for example, Latvia, where she had been on an "international visit" the day before, would stop buying any Belarusian goods, and at the same time stop cooperating with local banks. And also, she refused to jointly hold the Ice Hockey World Championship with Minsk, scheduled for 2021. However, she doesn't really need to beg Western politicians. There they continue the same course - towards non-recognition of the election results and the legitimate President Alexander Lukashenko. The corresponding resolution, for example, was adopted by the German Bundestag last week, and the OSCE representatives again burst out with calls for "holding new, fair elections in the country." The European bureaucrats "who have taken the bit" are already making obvious manipulations and distortions, continuing to pull the same song about "bloody repressions" and "illegitimate president."

The head of the European External Action Service (EEAS) Josep Borrell, who was previously fully noted for a full set of the most biased and biased political clichés used in relation to Minsk, has already reached the true heights of cynicism. He stated that the current government is guilty of the death of Roman Bondarenko, since ... “it created an environment for illegal and violent actions”! Note - not the self-styled "president" and her accomplices, not those who have been trying to make another "color revolution" in the country for several months now, but those who are trying to prevent chaos and the collapse of statehood. If ever there is a textbook on the use of double standards, this passage will need to be included by all means.

Fortunately for millions of Belarusians, Alexander Lukashenko shows no signs of fatigue or readiness to surrender. He still calls everything that happens in the country "an attempt at an anti-constitutional coup", and not a "revolution" at all. And he clarifies that the only "cure" for every country that does not want to repeat such a nightmare is "as deep as possible integration" into structures headed by Russia (such as the CSTO and the EAEU) and "deepening ties" with it. Well, better late than never ...
Ctrl Enter
Noticed oshЫbku Highlight text and press. Ctrl + Enter
We are
How Ukraine break Putin's plan: six tips Zelensky
Ten "defeats" of Putin
Reporterin Yandex News
Read Reporterin Google News
9 comments
Information
Dear reader, to leave comments on the publication, you must sign in.