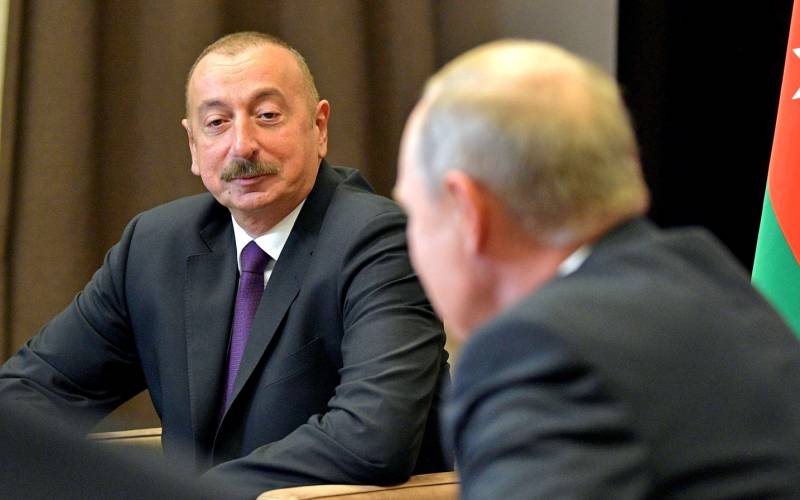 Four days later, it is already possible to draw some conclusions from the peace treaty signed between Azerbaijan and Armenia on the night of November 10.

War to the bitter end

Epigraph: "The goal of any war is peace on the terms of a winner." (Karl von Clausewitz) ".

Evaluating the chronology of events, it is safe to say that on November 9, as of 17:00 Moscow time, no one was going to sign any peace treaty. It is clear that all wars end in peace. But as von Clausewitz rightly noted: "The war is fought until victory, period." And it is stupid, you know, to sit down to sign a peace treaty with the enemy one step away from complete victory. And it is not for nothing that in Baku, immediately after the news of the signing of the peace, voices were heard about Aliyev's betrayal of national interests. The funny thing is that similar voices were heard in Yerevan, but Pashinyan was already accused of this.

It is clear that peace negotiations were underway. Moscow tried three times to seat the opposing sides at the table, and three times the agreements were thwarted the very next day after signing. Baku was the initiator of the breakdown, because it was not at all for that on September 27 that he began the military campaign, in order to sit down at the negotiating table a week or two later. “War - as the already mentioned Clausewitz rightly noted - is a continuation policy by other means ". With the help of her, Aliyev tried to solve all his problems, which the Armenians had created for his father in 1992. And after the capture of Shushi, he was one step away from their decision. There were only a few days left before the fall of Stepanakert, after which the problem of Nagorno-Karabakh could be closed. That was not at all part of Moscow's plans (I’m not talking about Yerevan at all!), But she could not do anything about this fact - Yerevan completely lost the military campaign and then only peace shone on it on humiliating terms.

Epigraph: "A kind word and a colt can achieve much more than just a kind word" (Al Capone).

And then there was a Belli incident. At 17:30 Moscow time, over the territory of Armenia, adjacent to the NAR (Nakhichevan Autonomous Republic - an exclave of Azerbaijan on the territory of Armenia, bordering on Turkey), a Russian Mi-24 fire support helicopter, performing the task of escorting the 102nd convoy, is shot down from the ground from an unidentified MANPADS. Russian military base. In this case, two Russian pilots are killed (the crew commander, Mr. Yuri Ishchuk and the onboard technician, senior lt. Roman Fedin), the navigator managed to escape, with moderate injuries he was taken to the base. And all this is happening hundreds of kilometers from the war zone in Karabakh. After that, events began to develop with courier speed and not at all according to the scenario that the direct participants in the conflict expected.

While the command of the 102nd base was investigating and establishing the ownership of MANPADS, and we were wondering on the coffee grounds who it could be, lost in conjecture between the CIA, MI6, Armenians or Turks, Azerbaijan took the blame, which through the mouth of its Foreign Ministry apologized for what he had done. This happened already 3 hours after the crash, i.e. at 20:30 Moscow time.

That radically turned the situation around. After the destruction of its military aircraft, the Russian Federation is stuck one step away from entering the conflict on the side of Armenia, which diametrically changes the balance of power on the board. All versions about the possible organizers of this action are immediately poured in. Armenians disappear, Americans and British too. Only the Turks remain, who are interested in disrupting peace agreements and continuing the war to a victorious end, but not by the same methods. Why should they also fight with Russia when they have completely different plans for this conflict (more on these plans a little later).

We are used to always looking for a black cat in a dark room, even knowing for sure that it is not there. We are always looking for some hidden meaning behind these or those actions of politicians, military and other leaders of an international scale. And sometimes the truth lies on the surface, sometimes being the result of someone's negligence, bungling or generally stupid selfish interests, and we are looking for a second or third bottom, weaving or unraveling the threads of conspiracy conspiracies. As Charles Maurice de Talleyrand, a French politician and diplomat of the Bonaparte era who survived three emperors as foreign minister, said: "Whole nations would be horrified if they knew what small people rule over them." Remember Yeltsin, who slept drunk on his working visit to Ireland in 1994. Everybody wondered what it meant? I do not know what the Prime Minister of Ireland Albert Reynolds, who was meeting him at Shannon Airport, thought, but the scandal was international. Yeltsin then honestly admitted himself - he slept, but we understood everything.

And now one could suspect Turkey of the destruction of our Mi-24, which has long been registered in Nakhichevan, and which could be interested in disrupting peace negotiations, but, firstly, at the time of the attack there were no negotiations, and secondly, when would she manage to persuade Baku to take the blame for the destruction of the helicopter in 2 hours? Such things are not done so quickly. And why does Baku need it? It turns out the usual human factor, the excess of the performer. As a result, a possible pretext for war became a pretext for peace.

Putin instantly turned on the turbo mode, tightening all the screws (something, but he can do that!), And blackmailing Aliyev with a possible Belli incident, forced him to sign a peace treaty. And all this happened in a matter of hours. At 17:30 Moscow time, our helicopter is shot down, at 20:30 Baku takes the blame, and already at 23:30 the parties sign the armistice agreement with their signatures (I am writing a truce, because it costs nothing to violate this agreement, it is necessary only notify the opposite side 6 months before, and then the Russian Federation will not be able to help with anything, as it is written in the contract). Here it should be noted the excellent work of the office of Sergey Lavrov, who oversaw technical side of the process, and of course, the bulldog grip of Putin, who grabbed and never let go of his victim.

The victim, however, also wanted to mock the other side of the process, demanding the signing of the Act of surrender on the air, but here Putin did not allow such a public humiliation of the Armenians. True, the Armenians themselves in this action did not look like silent sheep and, as best they could, fought at least to preserve the honor of the uniform, which resulted in several editions of this agreement (more on this below), nevertheless, at 00:00 Moscow time On November 10, the agreement entered into force. That showed the world an unconditional and undeniable victory of Russian diplomacy (Russia, with difficulty, but retained its status of an arbitrator in the Caucasus).

The road to the Caspian

But Turkey has already encroached on this status, forcing Russia to move in the historical domain of its interests, bursting on the shoulders of Azerbaijan into the Russian backyard in the Transcaucasus. What interests did Turkey pursue here, helping Azerbaijan to restore its territorial integrity? What does she care about Nagorno-Karabakh? She wanted to spit on him. Here she was vitally interested in the road to the Caspian Sea. And it was precisely this that the Azerbaijanis broke through, having conquered the southern corridor bounded by Mountainous Karabakh from the north and the Iranian border from the south with Turkish help from the Armenians, thus reaching the border with Armenia.

After that, Stepanakert could not have been taken. On the contrary, he is needed as a hostage in order to force Yerevan to open the road to Nakhichevan through its territory for "enemies" and thus close the land transport corridor between Azerbaijan and Turkey. Whether after that they will become one country or not is no longer so important. I don't think during Aliyev's lifetime. But the Sultan will not give his corridor through Azerbaijan to the Caspian Sea, and from there to Central Asia and China. After which Turkey can quite rightly count on the status of not only a regional power. A textbook-worthy operation.

What did Yerevan manage to defend

Below I will give the text of the agreement, originally signed by three parties (RF, Azerbaijan and Armenia) and published in the press (the first was news agency "Sputnik Armenia"). But already in the afternoon of November 10 at 11:45 Moscow time, the same document appeared on the official website The Kremlin. The documents, however, were different. Moreover, in favor of the Armenian side. You will notice the difference yourself (the deleted text will be crossed out, and the newly appeared text will be typed in italics).

1. A complete ceasefire and all hostilities in the zone of the Nagorno-Karabakh conflict are announced from 00:00 hours Moscow time on November 10, 2020. The Republic of Azerbaijan and the Republic of Armenia, hereinafter referred to as the Parties, stop at their positions.

3. Along the line of contact in Nagorno-Karabakh and along the Lachin corridor, a peacekeeping contingent of the Russian Federation is deployed in the amount of 1960 servicemen with small arms, 90 armored personnel carriers, 380 units of automobile and special equipment.

5. In order to increase the effectiveness of control over the implementation of the agreements by the Parties to the conflict, a peacekeeping center is being deployed to control the ceasefire.

6.The Republic of Armenia shall return the Kelbajar region to the Republic of Azerbaijan by November 15, 2020, and the Lachin region by December 1, 2020, while leaving behind... Lachin corridor (5 km wide), which will ensure the connection of Nagorno-Karabakh with Armenia and at the same time will not affect the city of Shusha, remains under the control of the peacekeeping contingent of the Russian Federation.

By agreement of the Parties, in the next three years, a plan for the construction of a new traffic route along the Lachin corridor will be determined, providing communication between Stepanakert Nagorno-Karabakh and Armenia, with the subsequent redeployment of the Russian peacekeeping contingent to guard this route.

The Republic of Azerbaijan guarantees the safety of traffic along the Lachin corridor of citizens, vehicles and goods in both directions.

7. Internally displaced persons and refugees return to the territory of Nagorno-Karabakh and adjacent areas under the control of the Office of the UN High Commissioner for Refugees.

8. There is an exchange of prisoners of war, hostages and other detained persons and bodies of the victims.

9. Unlocked all economic and transport links in the region. Republic of Armenia provides transport links guarantees the safety of transport communication between the western regions of the Republic of Azerbaijan and the Nakhichevan Autonomous Republic in order to organize the unimpeded movement of citizens, vehicles and goods in both directions. Control over transport communication is carried out by the bodies of the Border Guard Service of the FSB of Russia.

By agreement of the Parties, the construction of new transport communications linking the Nakhichevan Autonomous Republic with the western regions of Azerbaijan will be provided.

As you can see, Yerevan managed to defend the Gazakh region and not transfer it to Azerbaijan. And the Russian Federation separately prescribed the withdrawal of Armenian troops from the Lachin corridor and the transfer of it under the control of its peacekeepers. Those. Armenians in this situation were, of course, in a losing position, but at least not wordless.