"The Russians abandoned us." What do Armenians in Yerevan think about the loss of Karabakh 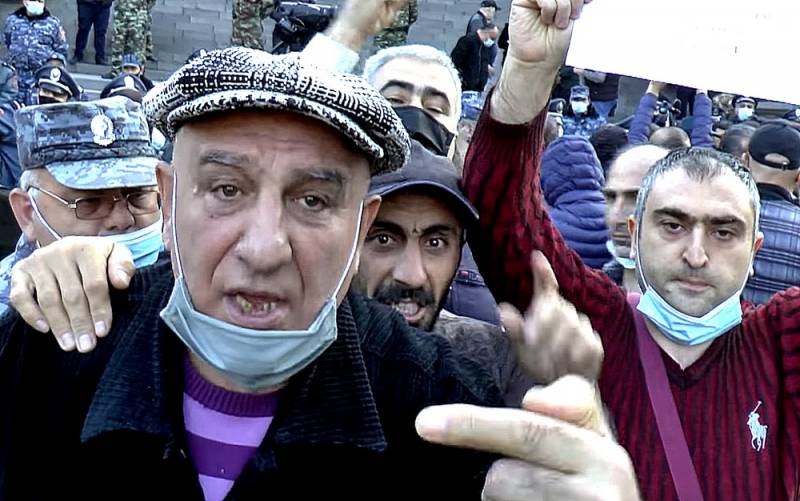 On the Russian initiative, on the night of November 9-10, Putin, Pashinyan and Aliyev signed an agreement on a ceasefire in Nagorno-Karabakh. According to the articles of the agreement, Yerevan returns Baku to the Aghdam, Kelbajar and Lachin regions, the Lachin corridor remains under the jurisdiction of the Russian peacekeeping forces. The Armenians qualify the outcome of the military conflict as surrender and loss of Karabakh, and many in Yerevan blame the Armenian authorities and Moscow for this.


The signing of the agreement led to protests in the Armenian capital. The demonstrators burst into the parliament building and took the podium in the conference room, demanding the continuation of hostilities in the NKR - all this was accompanied by shouts and bellicose exclamations.


A crowd of protesters gathered outside the legislative body of Armenia, expressing their views on who is to blame and what to do in the current situation.

We, our soldiers were not ready to surrender, but here in Yerevan they had already surrendered for us, but in fact the army (despite Pashinyan's words) did not support it
- said one of the protesters, hinting at the betrayal of their own military personnel by the Armenian authorities.

The soldiers are crying, nobody was ready for it
- another resident of Yerevan echoes the previous one emotionally.

Another widespread opinion among the Armenian population is the betrayal of Armenia by Russia, which, as many believe, did not come to the aid of its main allies in the Caucasus.

Russia was supposed to help Armenia in Karabakh with arms - if such assistance had been provided, we would not have been bombed with impunity by unmanned aerial vehicles during the first 15-20 days. We thought that the Russian Federation was our allies and would never abandon us, but the Russians abandoned us for the sake of their interests
- this opinion was expressed by one of those present at the rally.

Vladimir Vladimirovich, you are personally to blame for the situation in which the Armenian people find themselves now - thank you for that!
- Another protester echoes the general mood with wicked irony.

I don't see the Russian spirit here - the spirit of Azerbaijan soars here
- supposes one of the women in the crowd of dissent.

The claim against Russia is that it sells weapons to both Armenians and Azerbaijanis. Russia has always betrayed us - it was so in 15 during our massacre, the same is happening now
- this is how an elderly exalted woman put it, very negatively disposed towards both Russia and Azerbaijan.

Putin betrayed the Armenians - he did it. Just like Pashinyan, who turned out to be a weakling - they put pressure on him, as he was disliked by the Kremlin, which "drained" the Armenian Prime Minister with the hands of Turks and Azerbaijanis
- this is the opinion of a young man who accuses both Putin and Pashinyan.

However, one of the demonstrators paid tribute to Russia and its ceasefire efforts, thanks personally to Putin and holding a leaflet in front of him with words of gratitude to the Russian Federation: “Thank you Russia for peace !!! Grateful Armenian people ”.
Reporterin Yandex News
Reporterin Yandex Zen
147 comments
Information
Dear reader, to leave comments on the publication, you must sign in.