In Ukraine, they want to send Russians to "special camps". Will there be an answer? 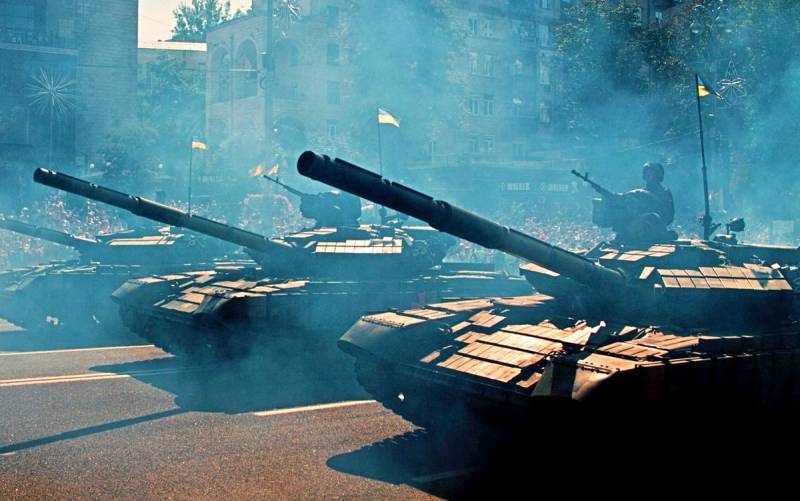 The "gloomy genius" of lawmaking "nezalezhnoy" is ready to give birth to a new creation: the Cabinet of Ministers of the country recently submitted a bill to the parliament, if adopted, any citizen of Russia on Ukrainian territory can be seized right on the street without trial and investigation and sent to "special settlements ". To use legal jargon - to intern. And speaking in a simple way - to drive them into the concentration camps created for such an occasion.


Something suggests that in this context one can hardly count on five-star hotels with "inclusiveness". Rather, we are talking about barracks, "thorns" and everything else from the same set. What are the details of this eerie initiative, who exactly is it threatening, and how should our country respond to it?

First of all, it should be said that the draft of the corresponding document, which has already become public, is striking either by the completely dense legal illiteracy of its authors, or by their stubborn desire to make all the formulations it contains as streamlined and vague as possible. The latter, most likely, is the case - with such "room for imagination" the possibilities for arbitrariness of the direct performers will be truly unlimited. Thus, the preamble of the bill says that citizens of a state located on Ukrainian territory can be subjected to "forced internment", which not only directly "carries out aggression" against the "non-foreign" state, but also "threatens to attack" it. Who and how should determine the presence of the fact of a threat, of course, is not said. However, and so it is clear that we are talking about the citizens of Russia, which "the faithful non-brothers" have long ceased to call otherwise than the "aggressor country."

However, it is supposed to detain and "forward" those in cases where it is "necessary to ensure national security." Even so: "absolutely necessary." At the same time, again, not a single criterion for this very "necessity" has been written out. In what case can a Russian citizen be considered an "infringed on security"? After hoisting the Russian flag on Khreshchatyk? When you try to enter a "military facility" or talk to a person in the uniform of the Armed Forces? Or simply because he had a passport with a two-headed eagle in his pocket? For some reason, I am sure that it is the latter ... This becomes especially obvious after studying the proposed specific mechanism of internment and the list of structures involved in it.

Primary, so to speak, actions to identify the "enemy zaslantsy", according to the government's "nezalezhnoy", should be carried out by the Security Service of Ukraine. Subsequently, the collected information is to be transferred to its vigilant employees to the General Staff of the Ukrainian army. And it is there that decisions will be made as to which of the discovered "potential spies" can be released for the time being in peace, and who should be immediately tied up and isolated in the most reliable way. Pay attention - no courts, investigative bodies, prosecutor's supervision and similar "extra links" in a simple and direct scheme, like an automatic bayonet, are not provided by definition. Nobody even thinks to oblige the Ukrainian warriors to report to anyone about the motives and reasons for the decisions they made. And really - why stand on ceremony with spies and saboteurs ?! Even if they did not even close to anything illegal ... For their "thorn" - and all a short time! Without trial and investigation. International law? Treaties and conventions? No, you haven't heard ...

Another detail is noteworthy: the bill says in black and white about the creation of "special camps", which should be set up by the local authorities in coordination with another very peculiar structure - the "Ministry of Temporarily Occupied Territories." Note - we are not talking about one "special settlement", but about many such places. This alone allows us to speak about the intentions of the Ukrainian authorities to grab everyone indiscriminately and "pack" without exception. Presumably, here they take an example from their overseas "mentors" who, immediately after the start of the war with Japan, gathered people of the corresponding nationality from all over the United States, and, regardless of gender and age, were driven into concentration camps, where they were kept until the very end World War II, until 1945. Again, without any trial, investigation and presentation of specific charges.

Why does Kiev need Russian hostages?

By the way, with regard to the period of detention of internees of Russian citizens in Ukrainian "special camps", the situation looks approximately the same as with the grounds for their detention. In captivity, these people will languish "until the presidential decree on the abolition of martial law is issued" "until the end of hostilities" or "until the reasons that became the basis for internment are eliminated." Well, about the last point, you can immediately say - this is not a legal formulation, but a bullshit, which, if desired, can be interpreted in any way or in such a way. As for martial law, no one introduced it in Ukraine, therefore, there is nothing to cancel. But about the "fighting" - here is much more interesting. The conflict in the east of the country has been going on since 2014 and there is no end in sight. Under such conditions, "internment" can very easily turn into life imprisonment.

However, in the Cabinet of Ministers "nezalezhnoy" does not really hide one of the main goals for which the whole business is being started. In the same bill, the local Foreign Ministry is entrusted with the responsible task of "negotiating the exchange of internees." That is, there is a clear desire of Kiev, having picked up citizens of Russia in cities and villages, to quickly make up of them an "exchange fund" in order to "excuse" its own extremists, spies, saboteurs and provocateurs from Russian justice. The fact that the exchange will be obtained is, to put it mildly, unequal, the Ukrainian side is quite satisfied. In addition, these are far from all aspects of this issue. There is no doubt that the same SBU will try to force all the detainees to "cooperate", and, more specifically, to recruit them as spies. Similar attempts may well be undertaken with respect to those of our compatriots whose relatives will end up in Ukrainian “special camps”.

Without a doubt, with all this, the employees of the security services of the "nezalezhnoy", its police and the National Guard, as well as other structures that will be involved in internment activities, will try to comply with their own selfish interests as much as possible. I am sure that the business of redemption of people who are in their tenacious paws, they will very quickly put on a broad commercial "foot". Presumably, it will be possible to pay off on the spot, during detention - but very expensive. The completely rotten "law enforcement system" and "power structures" of Ukraine, if anything, have succeeded now, then only in reprisals against innocent people and widespread bribery. And here are such new opportunities! At the same time, if someone thinks that getting into trouble fraught with a choice between paying a considerable bribe and bunks in the barracks of the "special camp", only those Russians are at risk who, for some urgent need, will enter the "non-cash" directly from the territory of our country , then he is deeply mistaken.

Let me remind myself - on April 24, 2020, Vladimir Putin signed a decree on a simplified procedure for granting Russian citizenship to residents of the DPR and LPR. On May 1, a new presidential decree expanded the list of such persons. So - back in February of this year, Secretary of the National Security and Defense Council of Ukraine Oleksiy Danilov made a very significant statement. It turns out that the NSDC is not only well aware of the number of Russian passports issued in Donbass (Danilov estimated it at about 156 thousand at that time). There are also lists of names of every citizen who received them!

There is every reason to believe that the main "hunt" will unfold just for them, as well as for the inhabitants of Crimea, many of whom are forced to cross the Ukrainian border much more often due to the presence of a large number of relatives, property and other interests in the "nezalezhnoy". The fact that most of these people will have Ukrainian documents in their hands will not save them - if Oleksiy Danilov did not lie, then, having an appropriate database, the Ukrainian special services will easily identify "enemies" right at border crossings. It is clear that dangerous trips to, in fact, already a former homeland will not be undertaken by everyone whose names appear in the relevant lists, but this is not at all about isolated cases. After that, it becomes clear why the Ukrainian government was concerned about the creation of special camps ... "The catch", presumably, is planning to get rich.

To tell the truth, I have not yet managed to find any official reaction of the government, the State Duma, or even the diplomatic department of our country to the truly cannibalistic and prohibitively Russophobic law proposed for adoption by Ukrainian parliamentarians. Is that the leader of the Liberal Democratic Party of Russia Vladimir Zhirinovsky, who is never particularly shy in expressions, called him "fascist", with which it is difficult to disagree. According to Volodymyr Volfovich, the authors of such initiatives, as well as other leaders of Ukraine, should be "tried by a public court in The Hague." Again, I agree - however, it is completely incomprehensible, where does The Hague have to do with it? Surely, upon a thoughtful study of the Criminal Code of Russia, there will be found relevant articles, at least for the prime minister of the "non-existent" Denis Shmygal, who put his signature on the document we are discussing, and indeed is quite a worthy development of the "creative legacy" of the Third Reich. Yes, there is a very high probability that this bill will not be adopted. However, this does not cancel and in no way compensates for the fact that it was generally written and submitted for consideration!

In any case, this is the most hostile demarche, almost tantamount to a declaration of war and undertaken against Russia by Ukraine at the state level. If we endure even such "slaps in the face", then, perhaps, in the "nezalezhnoy" really sooner or later there will be concentration camps for Russians. And, believe me, they will not be empty!
Reporterin Yandex News
Reporterin Yandex Zen
15 comments
Information
Dear reader, to leave comments on the publication, you must sign in.