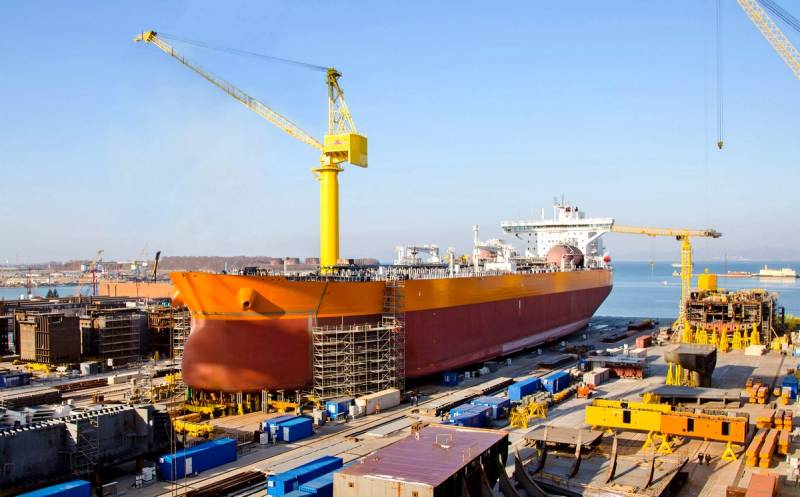 Our country was not so long ago one of the leading maritime powers, but today it has largely lost this status. The point is not only the weakness of the surface component of the Russian Navy, but also that the Russian civilian fleet is also a rather sad sight.


The civilian fleet is aging and decreasing in tonnage, their owners prefer to buy new ships abroad and fly under foreign flags. The average age of ships flying the Russian flag is about 20 years, which makes it one of the oldest in the world. The domestic fishing fleet has sharply decreased, and with it the catch of fish. Until recently, many icebreakers, the pride of our Arctic fleet, were produced abroad.

It must be admitted that certain conclusions were drawn by the authorities. In recent years, due to fear of Western sanctions, large state funds have gone into the domestic shipbuilding industry. In 2018, 82 new vessels were launched, in 2019 - 76, by the end of this year this figure will be 60. In the short term, the share of Russia in the world orders of the shipbuilding industry was 27%, with 26% from China and 45% from South Korea. Dry-cargo vessels of the RSD 59 project are being built most actively now, of which 16 vessels have been ordered at once. More than 40 fishing trawlers have been laid down and are under construction, a few days ago a flag was raised over the diesel-electric icebreaker "Viktor Chernomyrdin", the nuclear-powered icebreaker "Arktika" was put into operation. On the way, the delivery of an ice-class tanker of the Aframax type of project 114K, built at the Zvezda shipyard. For the first time in several decades, a four-deck cruise liner "Mustai Karim" was built in Russia.

This is a pretty positive dynamic, which can definitely be considered “good the news". However, every barrel of honey has its own bucket of tar. It is necessary to point out a number of serious problems that do not allow us to speak of an unambiguous breakthrough in the revival of domestic shipbuilding.

At first, there is still a critical dependence on the use of imported marine equipment, in particular, engines. The global sphere of shipbuilding services has long been divided among serious players who have their own specialization in it. The inclusion of Russia in it simply killed many enterprises that turned out to be uncompetitive, and now the domestic industry is simply not represented in a significant segment of ship equipment. It is very problematic to substitute import for it on our own, and the Russian market is not yet capacious enough to make it profitable for foreign producers to localize production in our country. And, apparently, there is no particular desire.

Secondly, a big problem is the extremely low speed of order execution by shipyards. In South Korea, China or Japan, ships are built on average 3-4 times faster than ours. The example of the icebreaker Viktor Chernomyrdin, which was designed with errors, burned, rose in price from 8 to 10 billion rubles, and its delivery time increased by 5 years from the originally planned one.

Thirdly, it is necessary to talk about the measures of state support provided to the shipbuilding industry in different countries. There are rules that ensure a level playing field, adopted under the agreement of the Organization for Economic Cooperation and Development (OECD), which define uniform credit conditions for all. In accordance with them, the size of the loan should be 80% of the value of the vessel at 8% per annum, and its term is 10 years. It is also allowed to partially subsidize the cost of building a ship by the state in the amount of 9%. However, the United States gives loans to its shipbuilders for 25 years, and not 80% of the cost, but 87,5%. Japan gives targeted loans at 5%, and the size of state subsidies in Tokyo, like in Berlin, can reach 30%. In order to support the industry, many countries are reducing duties on the import of ship equipment, and China and Poland have abolished them altogether. American Jones Act requires domestic and coastal shipping only on US-built ships and only under the Stars and Stripes.

This is more complicated for us. As a rule, commercial banks issue targeted loans to shipbuilders at 15-20% for a period of up to 2 years. If you turn to foreign banks for help, the terms of the loan may imply the need to purchase imported equipment. The cost of production in Russia is increased by high taxes and customs duties on foreign equipment, which has now become even more expensive due to the devaluation of the ruble. It may seem wild, but it is more profitable for customers to build a naked hull in our country, and then overtake it abroad, where the ship will be completed and equipped.

Thus, some positive shifts in the domestic shipbuilding industry are indeed observed, but there is still a long way to go before a full-fledged revival. To do this, you first have to solve a whole range of problems.
Ctrl Enter
Noticed oshЫbku Highlight text and press. Ctrl + Enter
We are
Peace enforcement operation. Russia inflicts a preemptive strike on Kiev
Three years left: Ukraine will be sold in parts
Reporterin Yandex News
Read Reporterin Google News
10 comments
Information
Dear reader, to leave comments on the publication, you must sign in.