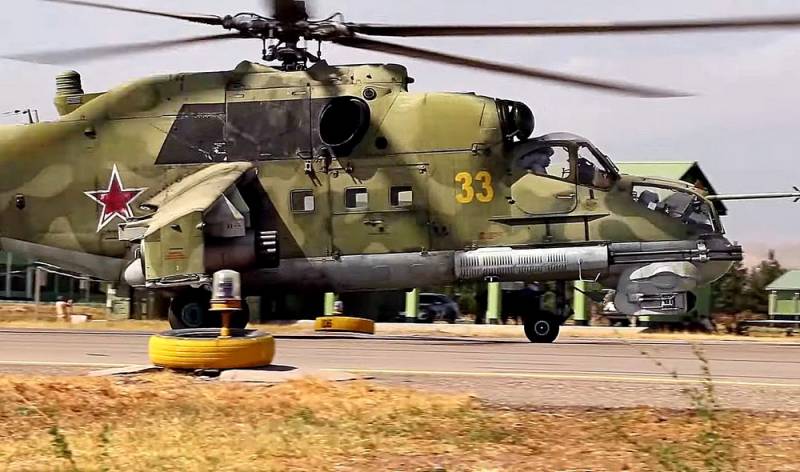 In the skies of Armenia, a Mi-24 combat helicopter of the Russian Armed Forces was shot down by a shot made from MANPADS from the territory of Azerbaijan. Two crew members were killed, the third was seriously injured. Tellingly, it happened two weeks before the anniversary of a similar tragedy that happened five years ago - on November 24, 2015, a Turkish fighter in the Syrian sky shot down a Su-24M front-line bomber of the Russian Aerospace Forces. Then the lives of our soldiers were also cut short.


There are so many similarities between these two events, so many obvious and possible parallels that it takes horror. It is undoubtedly premature to draw unambiguous conclusions, but it is already becoming clear that our pilots fell victim to a colossal provocation aimed at achieving a peaceful settlement of the conflict in Nagorno-Karabakh on Russia's terms.

Hot on the trail versions

The Ministry of Foreign Affairs of Azerbaijan with a rare for such cases promptly acknowledged the responsibility of its country for the fatal incident, calling it a "tragic mistake" and, having made an official apology, expressed its readiness to "conduct an investigation" and pay "appropriate compensation". As far as is known, his colleague from Baku, Zakir Hasanov, addressed the national defense minister Sergei Shoigu with a written expression of condolences. It would seem that there is the most sincere repentance and an approximate willingness to make amends, that's just ... That's just the official version of the Azerbaijani military and diplomats about "accident", "mistake" and the like, excuse me, it's not worth a damn.

Let's look at the details that, as always, reveal the truth. First of all, in the region of Nakhichevan, where, in fact, our Mi-24 was shot down, no military actions related to the armed conflict in Nagorno-Karabakh were fought even close. Consequently, there could not be a situation with the Azerbaijani military, who were at the maximum "platoon" and were firing at everything that seemed minimally suspicious. By the way, here's another good question: what were the fighters equipped with modern MANPADS and obviously very professional with them doing near the Armenian border? One gets the feeling that a completely purposeful hunt was being carried out for the Russian helicopter. In favor of this version, it also works that the Mi-24 hit by the missile did not just make maneuvers in the airspace, but, according to the official report of the command of the military base 102 of the Russian Armed Forces located in Armenia, escorted the convoy from this base.

So all the talk about the fact that our aircraft was “confused with the Armenian” is sheer nonsense. Was the column confused too? Or haven't you noticed? In addition, even if we assume that those who fired at the helicopter believed that it belonged to Yerevan and not Moscow, then we still have an armed attack on an aircraft of a CSTO member country, which was also carried out over its territory. That is, it was a completely unambiguous act of aggression, which would fully untie the hands of Russia even if an Armenian Air Force helicopter fell to the ground and their pilots were killed. Did the shooters not realize this? I will never believe. Such "accidents" and "misunderstandings" simply do not exist in nature. Hence - a whole heap of questions and versions. The most simple and literally asking itself is the “Armenian trace”.

Let's put aside sentimentality and speak frankly, like adults: for Yerevan, what happened seemed not just a colossal success, but perhaps the last chance to avoid a grave and shameful military defeat. Agree, the fact that the Russian helicopter is shot down on the day when the NKR forces officially recognize the loss of control over the most important strategic point - the city of Shushi, playing the role of a key to the capital of the unrecognized republic, is more than a suspicious "coincidence". And the more than violent reaction of Yerevan that immediately followed, where everyone - from representatives of the local Foreign Ministry to Nikol Pashinyan's chief adviser Vagharshak Harutyunyan - repeated Azerbaijan's "insidious blow" and "undoubted aggression" and called for indispensable retaliation, is also quite typical. So - are they still Armenians ?! Let's take our time and consider the situation in light News, received literally at the time when this material was being prepared.

Findings based on facts

Suspicions about the involvement of some desperate “patriots” of Armenia in the death of the Russian helicopter, who decided to “save the situation” in such a terrifying way on the eve of imminent defeat, completely dispel two things. Firstly, if Baku had the slightest reason to “disown” the tragedy, it would in no case admit its own guilt. Moreover - as fast as it happened. Well, and secondly, (and in the main, in fact), as it became known literally just now, the war for Nagorno-Karabakh has come to an end. The Presidents of Russia, Azerbaijan and the Prime Minister of Armenia signed a document according to which Baku receives virtually all the territories that were recaptured by the Azerbaijani army during the current conflict. Aghdam, Gazakh, Kelbajar and Lachin regions, as well as the city of Shusha, remain under the control of Azerbaijan. However, the Nagorno-Karabakh Republic will continue to exist, albeit in a fairly "truncated" form. Moreover, from now on, she will live under the protection of Russian peacekeepers, whose almost two thousand contingent is brought into the conflict zone to delimit the warring parties and protect the "Lachin corridor", which is vital for the NKR. Our troops will be deployed there for a period of 5 years, with subsequent automatic renewal as needed. What do we have "in the bottom line"?

In fact, it was a disruption to the plans of all those forces that sought to turn the war for Karabakh into a geopolitical defeat for Russia in the Caucasus. Not Ankara, but Moscow remains the main guarantor of security in the region, not only preserving, but significantly strengthening its own military-strategic presence in it. Politiciansboth in Armenia itself and outside of it, who tried to accuse our country of "betrayal" and "failure to fulfill allied obligations", now this will never be done. In turn, Pashinyan, who is not too friendly to Moscow, will not be able to shrug off the responsibility for the defeat. According to the available information, mass demonstrations have already begun in Yerevan, which obviously will not end well for the prime minister.

And again, back to the tragedy of the Mi-24. Apparently, the current establishment of peace in the flames of Karabakh was preceded by a conversation between Vladimir Putin and Recep Erdogan, during which, as it was officially announced, the two leaders "confirmed their mutual readiness to cooperate to end the war." However, taking into account the rather restrained reaction of the Kremlin to these negotiations and the accompanying statement of the Russian Foreign Ministry about “significant differences between the Turkish and Russian positions on Karabakh,” no special consensus was reached. Most likely, the "sultan" was presented by Vladimir Vladimirovich with a fact. Or a number of facts from which it followed that Ankara's ambitions in this direction should be tempered, and the sooner the better. It was just after this that the fatal missile was fired from the territory of Nakhichevan, which, according to military analysts, is currently under almost complete Turkish control.

Azerbaijani military men admit their guilt. And what is left for them? Sign that they have long been Turkish puppets? Trying to deny the obvious? Despite the fact that someone did a very good job to ensure that the incident became the property of general publicity by organizing a video filming and posting it on the Internet ... And then deal with the entire Russian army? It is very likely that the attack on our helicopter was indeed a desperate attempt to drag Russia into the war, making it impossible to reach the peace agreements it had prepared. But this attempt did not come from the Armenian side. And not even from Baku. Here everything is much more complicated and there are serious suspicions that it will not be possible to get to the bottom of the final truth - exactly as it was with the Su-24M shot down in Syria.

Pay attention - in both cases, the actions were directly aimed at pushing Russia and Turkey into a full-scale war. Who exactly is behind this - certain radical circles in Ankara itself or some "third force", the role of which is best suited for the United States, more than anyone else interested in the clash between our countries? It is impossible to say unequivocally - let me remind you that both pilots of the Turkish F-16, which shot down our plane over Syria, were subsequently declared participants in the military coup attempt directed against Recep Erdogan and disappeared, as they say, without a trace. But they managed to shift all responsibility for what happened - at least at the official level. Something suggests that in the present case, neither the true culprits, nor even those who actually gave them orders and set a goal, will never be named aloud. As already mentioned, in the current situation, it is easiest for Baku to take on the whole blow. Moreover, they expect to get off with the payment of compensation, not realizing that Moscow's current restraint is caused solely by the desire to complete the negotiation process and bring in peacekeepers, after which the decisions made will become irreversible.

However, a lot will be clear from further actions of Ankara - both in the Caucasus and in other “points of contact” of Turkish interests with Russian ones. An escalation in any of these sections will be very indicative of a lot. In any case, I would like to hope that the relevant structures of our state will make every effort to find out who exactly was behind the attempt to disrupt the conclusion of peace in Nagorno-Karabakh, which cost the lives of two Russian pilots, and to punish those responsible for this cold-blooded and cynical war crime ... Such things have no excuses and should not go unpunished in any case.

Far from the first and, alas, most likely not the last time our soldiers pay the highest price for peace in someone's house. We express our most sincere condolences to the families and friends of the deceased pilots and wish the surviving crew member a speedy and complete recovery.
Reporterin Yandex News
Reporterin Yandex Zen
13 comments
Information
Dear reader, to leave comments on the publication, you must sign in.