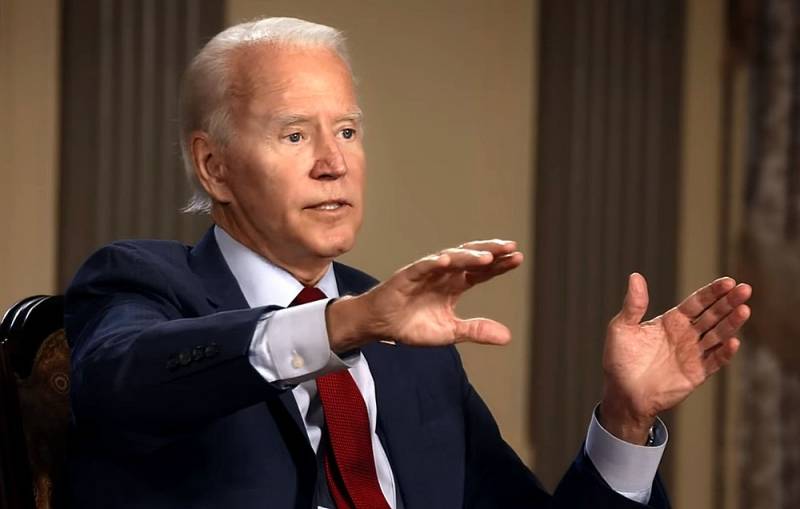 The enchanting show called "US presidential elections" is entering a new circle - both candidates with absolute conviction broadcast about their own victory and each of them seems to be ready to bend his line to the end. What the finale will be is far from clear, but some are already in a hurry to congratulate Joe Biden on the success. Many countries around the world are wondering what exactly the change of power in the White House will turn out to be for them?


Russia is no exception, and this is more than natural, because the last years for our country have passed under the sign of an increasingly aggravated confrontation with the United States. Obviously, based on this, the forecasts today are mostly gloomy. Let's, however, try to figure out - is it worth worrying ahead of time, and if so, what exactly? Consider at the same time the three main concerns that are expressed by domestic analysts about the possible victory of Biden.

1. He will impose "hellish sanctions"

Yes, the representatives of the US Democratic Party are big fans of taxing our country. In the sense - more and more new restrictions. One can even envy their ingenuity in this matter, while complaining: "such an energy - yes for peaceful purposes!" I remember that Biden himself spoke about the next sanctions, as if expressing his intentions to “punish Russia” for something. Nevertheless, there are two fundamental points to consider here. First of all, the most diverse anti-Russian sanctions demarches performed by the democrats were, rather, not economic, but a purely political and propaganda load. Who was Trump there? "Agent of the Kremlin"? So they, accordingly, got out of hand in coming up with reasons and reasons to introduce something "such" and thereby demonstrate how favorably differ from their opponent. Would they need something like that if their representative took over the Oval Office? A very controversial issue. This in no way means that after the elections, the Democratic Party and its congressmen and senators will inflame Russia with love and race to rush to cancel the sanctions imposed by them. But to introduce new ...

The question, among other things, also lies in the fact that Washington practically "chose" the entire limit of restrictive actions that could be taken without significant damage to its own interests and without risking the entire global financial and economic system. At the same time, the "light" US sanctions against Russia, if they proved anything brilliantly, only their extremely low efficiency. But moving on means stepping on a very thin "ice" that can simply break through. Do you think the United States is not imposing an absolute embargo on the purchase of Russian oil following the Iranian model for humanistic reasons? Yes, they would do it with great pleasure, but this can lead to such shocks in the energy markets, the consequences of which cannot be predicted by all specialized analysts in Washington. Roughly the same situation with, say, the "disconnection" of our country from the SWIFT payment system. No matter what "formidable" rhetoric they resort to on Capitol Hill, they are well aware that, having crossed certain limits, they can cause uncontrollable and unpredictable processes on a global scale. And in addition, to push Moscow to take actions much more radical and harsh than now. So we are unlikely to receive more "hellish" sanctions than they are, at least in the near future.

2. He will rally NATO against Russia

Another cause for alleged concern. Trump, they say, was almost half a step away from “destroying” the North Atlantic alliance, and cutie Biden would instantly “make peace” with Europe, which was deeply offended by his predecessor, strengthen ties and alliances with it, and ... So what? Will he move all this united army to storm the Russian borders? Yes, the President of the European Commission Ursula von der Leyen has already rushed to congratulate the Democratic candidate on his victory, scattering in praises and gushing with optimism. She, you know, "is looking forward to the opportunity to advance the global agenda with the new US President", whom she sees only and exclusively Biden. NATO Secretary General Jens Stoltenberg also hastened to congratulate the "resolute supporter of transatlantic unity" whom he calls "to resist Russia". Before sounding the alarm on this matter, let's remember the completely obvious things. Let's start with the fact that during the time of the current (or already former?) Owner of the White House, with all his harassment of European "allies" in the Alliance, which were exclusively financial in nature, the American military presence in the Old World not only did not decrease, but increased, perhaps , factor of! What was the Defense of Europe 2020 exercise alone worth ...

It was only the coronavirus pandemic that prevented these maneuvers from expanding in full force and breadth, unprecedented in scale and degree of provocativeness. Moreover, both the supply of weapons and equipmentand the process of deploying US military contingents, the locations of which are increasingly shifting to the East, continued during the Trump presidency quite regularly. Withdrew troops from Germany? Well, after all, he moved them to Poland and the Baltic states, which is much more unpleasant for our country. Let me suggest that if Biden begins to restore interaction with NATO in a "classical" format, without making a serious "bias" towards its small, but extremely aggressive and Russophobic-minded members, like Warsaw or Vilnius, Russia will only benefit from this. With the Alliance in its usual contradictory diversity, often mutually exclusive interests (from Greece to Turkey), we have coexisted since 1949 and so far, fortunately, without war. But with that small but vicious pro-American military alliance that began to cobble together under Trump on our and Belarusian western borders, it is unlikely to be so. In any case, everything must be taken into account - both Biden's words about our country as "the main threat to US security and alliances", and the fact that Democrats have repeatedly and sharply criticized Trump for actions aimed at dismantling the current global security system and leaving the relevant contracts. It is unlikely that it will be worse than it is, but can at least START-3 be preserved?

3. He will push Ukraine to escalate the conflict

Perhaps the most serious and deepest concerns about Biden's possible actions against Russian interests are related to the "non-exclusion". Say, Ukraine has no "best friend" and more ardent supporter than "Uncle Joe". Well, you can say that - in the local "layouts" the Biden family is involved, as they say, head over heels. The current presidential contender himself has been to this country seven times when he was vice-president under Barack Obama, and his son became famous all over the world for his rather dubious ties with Kiev, both commercial and political... Nevertheless, the firm belief that Biden would immediately "return him to the kingdom", barely crossing the threshold of the White House, could only be seen by Petro Poroshenko, with his usual grandiose hangover. However, the rest of the hopes of the Ukrainian "hawks" for the new American leader on closer examination look rather dubious. Yes, Biden said something about "military support and" lethal weapons. " Nevertheless, the Armed Forces of Ukraine began to receive weapons in the form of the Javelin ATGM under Trump, and not under the Obama Democratic administration.

Moreover, it was Biden in Kiev who spoke from the rostrum of the local parliament about the need to implement the Minsk Agreements, that Ukraine should not just decentralize, but federalize! However, even this completely unambiguous speech by the then US Vice President pales before the recording of his conversation with Petro Poroshenko, made public in Ukraine, on the incident in Crimea, where our special services neutralized two Ukrainian sabotage groups in August 2016. On this tape, Biden literally smashes the Ukrainian president to smithereens, repeating about "gigantic problems" and the inadmissibility of taking Russia's opposition to Crimea "beyond the scope of political and diplomatic efforts." He clearly and unequivocally prohibits Kiev from conducting "any military or subversive and subversive operations" against Russia, and Poroshenko, in a trembling voice, assures his interlocutor that "not only nothing of the kind will happen again, but nothing at all." And, by the way, this figure really calmed down - right up to the "Kerch provocation" of 2018, which was undertaken already under Trump. Certainly, Washington's support for Kiev, both political and military, will continue. And so it will be under any leader of the American state. However, there is hardly any reason to believe that under Biden it will take on too hypertrophied volumes and shapes, and even more so it will result in the beginning of large-scale hostilities.

All of the above in no way means that we should rejoice at the election of Biden as President of the United States, if such is still recognized as valid. Yes, it is quite possible that in the framework of attempts to normalize relations with Europe, which were badly damaged by his predecessor, he will somewhat reduce the pressure on the same Nord Stream 2. This is quite possible, especially given that the representative of the Democrats is a fanatical supporter of green energy and is unlikely to lobby the interests of US oil corporations as diligently as Trump. However, new problems with the United States may arise in completely different directions - and will arise, you can be sure of that. Following the logic of the actions of the American Democratic Party (under the same Barack Obama), one can expect that avoiding direct military confrontation with our country, Washington will triple, or even tenfold, its efforts to "bring democratic change" in Russia. Calling a spade a spade - he does everything possible to activate the preparation for the device in our country of the "color revolution". Let me remind you that the Ukrainian "Maidan" broke out just under Obama and Biden.

I don’t know to what extent the recently published data of a sociological survey conducted by the Public Opinion Foundation, according to which at least half of our compatriots are closely following the presidential race in the United States, correspond to the truth, 29% of whom sympathize with Donald Trump and only 4% - his opponent ... I think this is true - we are too accustomed to "get sick" in fights, a positive result from which should not be expected by definition. However, it is encouraging that, according to the same poll, more than a third of Russians believe that the elections will change absolutely nothing and that US-Russian relations will remain as tense and cold as they are now. Well, this is already a good result in the field of realism. Now we need to think about our own problems, and those that will come from across the ocean, solve, as they say, as they come.
Ctrl Enter
Noticed oshЫbku Highlight text and press. Ctrl + Enter
We are
"We must beat first": the geopolitical alignment around Russia is continuously deteriorating
"Only old men go to battle": three reasons why Trump might lose to Biden
Reporterin Yandex News
Read Reporterin Google News
8 comments
Information
Dear reader, to leave comments on the publication, you must sign in.