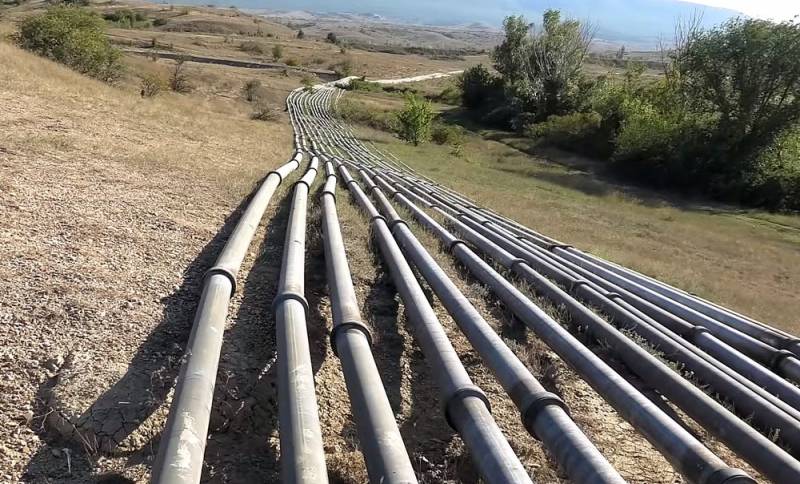 Not everyone, probably, knows that Crimea was included at one time in the Ukrainian SSR precisely in order to resolve the issue of water supply. On this peninsula, with a high population density by Soviet standards, there are no such large rivers and lakes that could fully meet its needs for life-giving moisture. After all, it is needed not only to meet the household needs of the population, but also for agriculture and industry.


If there are mountains in the south of the peninsula, where the rivers Alma and Belbek originate, and there have always been fewer problems with water supply, then the north and east of Crimea is an arid steppe. Therefore, in 1961, it was decided to build the North Crimean Canal from the Dnieper to the village of Zelyony Yar in the vicinity of Kerch. The canal was completed in 1971 and with its help they were able to fully meet the needs of the Crimea for fresh water. However, even before the start of construction, it became clear that a large number of bureaucratic discrepancies arise, since the canal needs to be led from one union republic to another. Whatever one may say, but formally the USSR was a confederation.

The comrades responsible for the solution of the issue slightly scratched their heads and decided that it would be easier to transfer Crimea to the Ukrainian SSR than to jump over all the bureaucratic ravines, from which it was not at all smooth on paper. So the common statements in the style of "bad Khrushchev gave Russian Crimea to the Ukrainians" do not cost anything. Everyone lived in one country, and then no one in a nightmare could have imagined that in less than 50 years this country would not be.

And one of the consequences of the collapse of the USSR and the territorial problems that arose against this background was the return of Crimea to Russia. Which, in fact, could have taken place under Yeltsin, if he wanted to. But what happened happened.

As a result, the descendants of the “great ukrovs” who dug up the Black Sea decided to punish the occupied Crimeans for being annexed by the evil aggressor - Russia. One of these punishments was the blocking of the North Crimean Canal, which created serious problems with the peninsula's water supply, mainly in the summer months. The water that used to go to the peninsula is now quietly and peacefully dumped into the sea. The old principle, well-known from jokes, is “ne zim, so I bite”.

In order to rectify the situation, the authorities are taking a whole range of measures, but so far they have not been able to solve the problem. One of the main and obvious steps is the reconstruction of the dilapidated water supply network and reduction of losses. According to most experts, very significant.

Other projects are already being launched. In particular, they plan to provide the north of Crimea with water due to the transfer of moisture from reservoirs in the southern part of the peninsula. There, in Soviet times, a considerable number of artificial reservoirs were built, accumulating moisture that flowed down from the mountains. Moreover, the water conduits are built of a closed type in order to exclude moisture loss as a result of evaporation.

About 220 km of polyethylene and cast-iron pipes from three water intakes in the north-east of the peninsula fed by groundwater will be built in Feodosia and Kerch, for which new wells will be built. To provide the capital of the peninsula Simferopol with water, the Mizhgornoye reservoir will be restored, which will be filled with water from the Belbek, Alma and Marta rivers. The project is already under development.

Other methods are also being sought, up to the construction of complexes for the desalination of sea water. In total, the comprehensive action plan to ensure reliable water supply to the Republic of Crimea and the city of Sevastopol includes 14 points and is designed for a period until 2024. About 48 billion rubles will be invested in it.

But if the water pipelines under construction will soon be put into operation, then the rest of the ideas are still at the design stage, or even theoretical research. The task is not an easy one, because when solving it, it is important not to damage the environment, and it can be very significant. For example, if you pump too much moisture from underground sources, they will become salinized.

And the construction of desalination plants is also fraught with problems. A large amount of waste with a high salt content will need to be disposed of somewhere. Just pouring them back into the Black Sea or into salt lakes, as suggested by a number of experts, is not an option, since the most serious damage to the biosphere of reservoirs will be caused. So, all existing proposals for providing Crimea with water require careful analysis before being put into practice.

And while scientists are scratching their heads and spears, we, apparently, will regularly receive information from the media about the next special operation to provide the Crimeans with water. A radical solution could be the construction of a water pipeline through the Kerch Strait, but they decided to abandon it due to its extreme high cost. And the Krasnodar Territory and the Rostov Region - potential donors - are also now experiencing problems with water.

But desalination is still considered to be a much more promising direction. True, we are not talking about the Black Sea, but about wastewater. Since the salt content in them is minimal, there will be less discharges. Moreover, according to a number of experts, the nitrogen and phosphorus compounds contained in them can be fully used as raw materials for the production of mineral fertilizers.

However, now we are not talking about making up for the loss of the North Crimean Canal. The main task of all the above measures is to provide only the most urgent needs of ordinary inhabitants of the peninsula and industrial enterprises. And this task, apparently, will be solved over time.

The final solution to the problem of a full-fledged water supply to the peninsula, which would meet the needs of industry and agriculture, is possible only by resuming water supply through the canal. And here the only way out is to exert as much pressure as possible on the leadership of Ukraine in order to force Kiev to make concessions. We are, of course, polite people, but politeness does not exclude firmness, especially towards those who behave in a boorish way.

How to show such firmness? To begin with, start including this issue on the agenda of any bilateral negotiations with Ukraine. Do you want us to meet halfway? Let's decide something with the water supply of Crimea. And so on for each discussed issue.
Reporterin Yandex News
Reporterin Yandex Zen
15 comments
Information
Dear reader, to leave comments on the publication, you must sign in.