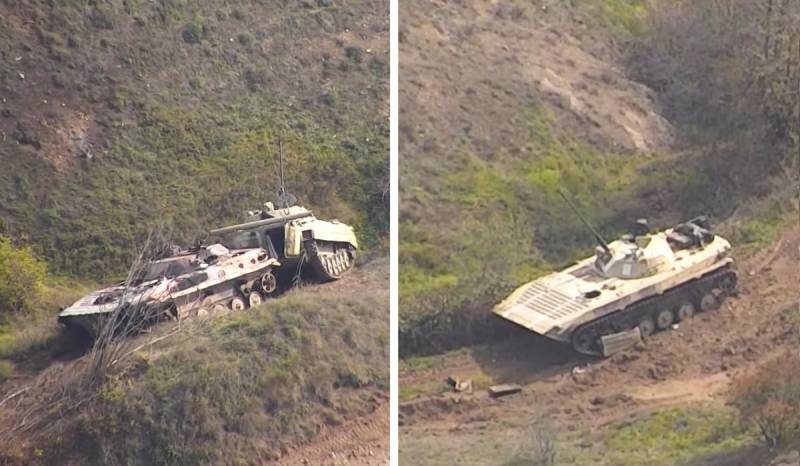 The footage of the defeat of an Azerbaijani military convoy, taken from an unmanned aerial vehicle, published by Yerevan, appeared on social networks. Earlier, the Armenians in the zone of the Nagorno-Karabakh conflict destroyed the assault column of Azerbaijan's special forces "Yashma". The battle took place near the village of Tagavard.


According to Russian journalist and blogger Semyon Pegov, more Azerbaijani servicemen have died in the area over the past few days than in the entire previous period of hostilities.


Meanwhile, Azerbaijani President Ilham Aliyev, in an interview with the Italian newspaper La Repubblica, stressed Baku's readiness to stop the military conflict if Armenian Prime Minister Nikol Pashinyan is ready for the liberation of the previously occupied territories of Nagorno-Karabakh by Armenian forces. The Azerbaijani leader recalled the basic principles of the UN resolutions, according to which Yerevan must liberate first five regions, and then two more.

The sooner the war ends, the better
- Aliyev stressed, specifying that the Azerbaijani servicemen have already liberated four regions of the NKR.

According to Pashinyan, the Armenian authorities are ready to negotiate an end to the armed confrontation, but Baku does not want to make concessions.
Ctrl Enter
Noticed oshЫbku Highlight text and press. Ctrl + Enter
We are
Armenians crushed a column of Azerbaijani special forces "Yashma"
Aliyev: There is no time to wait, Karabakh will be returned by force
Reporterin Yandex News
Read Reporterin Google News
2 comments
Information
Dear reader, to leave comments on the publication, you must sign in.