Zugzwang Zelensky: while everyone was watching the United States, the chair staggered under the head of Ukraine 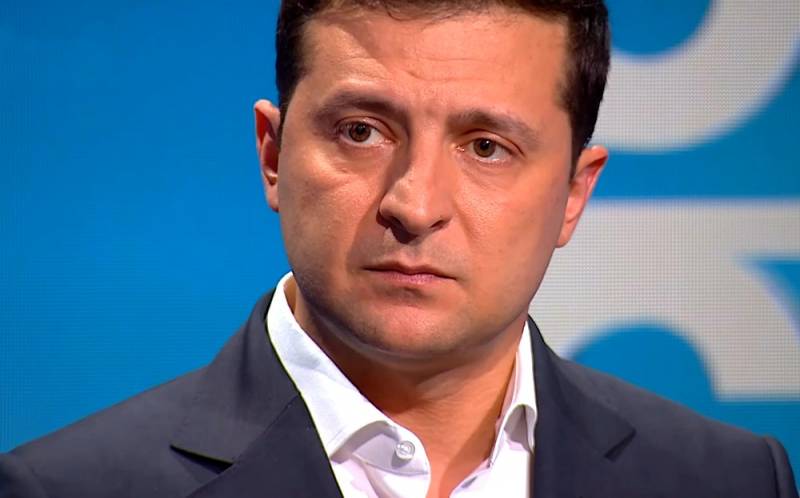 While the whole world, with bated breath, waited for the elections in America, a chair swayed under the leader of the natives in the overseas US colony in Ukraine. Moreover, the director of the banana republic laid the mine under his throne himself.

Decisions of the Constitutional Court are an act of direct action (which means that their activation does not require confirmation from any other state bodies), are binding and final, enter into force immediately after being adopted by the court and are not subject to appeal. This is what the law says. And it was this law that Vova Zelensky tried to challenge, who tried to cancel the decision of the National Security Council of Ukraine and push this resolution through the Rada by decree of the NSDC. And in order not to go for the second time, with the same bill, he proposed to the deputies to disperse the KSU, which he did not like, by early terminating the powers of the current judges. Thus, again going beyond the legal framework, since according to the law, only the members of the CCU themselves can early terminate the powers of the CCU (by two-thirds of the votes).

Essence of the question

What made Vova Zelensky, who himself is the guarantor of the Constitution, to hit all the hard and push the Rada deputies to adopt unconstitutional decisions, in fact substituting this for impeachment? The reason was the decision of the Constitutional Court of Ukraine on October 27 in the case of the compliance of certain provisions of the Law "On Prevention of Corruption" and the current Criminal Code of Ukraine with constitutional norms. Where the court recognized the key provisions of this law, primarily concerning the powers of the NAPK (National Agency for the Prevention of Corruption), as well as Art. 366-1 of the Criminal Code, which provides for the punishment for false declaration (fine or imprisonment) of state or local officials as unconstitutional.

As a result of the subtle surgical intervention that took place, the whole pyramid of anti-corruption bodies collapsed, which the collective West so carefully erected in the Ukrainian Bantustan all these years after the revolution of hydrology. For what, one wonders, did the Western curators fight all this time, spoon-feeding the fragile Ukrainian democracy suffering from a pathological craving for corruption? For which they shed blood (not their own, of course, but the Ukrainian natives), not sparing their belly, trading visa-free, etc. different differences (from loans to debt cancellation)? For some KSU to come and in one fell swoop to destroy everything that was created by the overwork of many European integrators - NABU (National Anti-Corruption Bureau), NAPK (National Agency for the Prevention of Corruption), SAP (Specialized Anti-Corruption Prosecutor's Office), two Anti-Corruption Courts (Supreme and Higher intellectual property), as well as the National Agency for the detection, search and management of assets obtained from corruption and other crimes? As the hero of the famous film said:

Everything that I had gained by back-breaking labor, nevertheless perished ... Three tape recorders, three foreign movie cameras, three domestic cigarette cases, a suede jacket ... also three!
And what is especially touching in this whole story is that sophisticated cynicism with which the KSU did all this, closing free access to the Unified Register of Electronic Declarations of Top Officials - it not only reset the work of the NAPK, but actually left all other anti-corruption organs. In fact, by removing the cornerstone from the system, which held everything, he led to the collapse of the entire pyramid.

The reaction of the West

The decision of the Constitutional Court of Ukraine to actually dismantle Ukraine's anti-corruption platform caused a sharply negative reaction both in society and in politicians, and not only in Ukraine. Immediately, the ambassadors of 7 countries, led by the United States, reached out to Bankovaya to express their extreme concern about Ukraine's withdrawal from the agreements and threaten with all punishments, starting with the abolition of visa-free travel and ending with the curtailment of financial cooperation. Vova Zelensky reacted to this like any self-respecting president of a sovereign country - he immediately saluted and immediately gathered the National Security and Defense Council (NSDC), they say, it's not me, guys, this is a vile KSU kidding. You know his further actions - he himself committed a violation of the Constitution, which caused a legal collapse in the country, from which there is no decent way out (in chess, such a situation is called zugzwang).

And it seems to be a sin to scold him for it. Indeed, in fact, he is not trying for himself, he is fighting corruption, which has already permeated all the cells of our society. And in war as in war, all means are good here. Well, just think, he slightly violated the Constitution, so whoever did not violate it here: Yushchenko with his third round of elections, and Yanukovych with a return to the old Constitution, and modern European integrators, removing the fugitive Yanukovych from office. The main thing here is not the letter, but the spirit of the law (sorry, I'll go open the window, because I can't say that the corpse of the Constitution is not sweet and pleasant to me). But the end, as they say, justifies the means.

The last stronghold of sovereignty

In view of all of the above and the actions of our partners in implanting in the native Bantustans the norms of Western civilization, which does not accept corruption and does not spare strength to fight it, it is somehow difficult to evaluate negatively. We all live in the paradigm that whatever America does in its overseas colonies is bad. However, this is not always the case. Take the example of Ukraine, for example, what is wrong with the fight against corruption? And really, the average man will say, what's wrong with that? But it was then that the dog dug in! The whole point is that all this punitive tool, erected by the Western colonialists in the territories they inherited for plundering, is aimed not at eradicating the phenomenon of corruption as such, but to keep the native administrations in fear, for more effective management of them by siphoning resources from these territories. Have you thought for a second why we have corruption, but there are no corrupt officials? For all the years of NAPK's work, only 40 thousand have been returned to the state, and not even dollars. And all the bribe-takers and hardened corrupt officials got off with only administrative responsibility and are sitting in their previous positions (even in the KSU there are complaints against three judges, I am already silent about the director of NABU Artem Sytnik). The answer is simple - the task of Western curators is not to defeat corruption, but to lead it in order to keep the natives in check.

The funny thing is that the only fighters for the preservation of sovereignty in all bantustans are the national oligarchy, it is he who, in the fight against transnational corporations, risks losing its own fodder base, and with it the source of profit. Therefore, the countries where there are no oligarchs of their own have long surrendered to the will of the winner (Lithuania, Latvia, Estonia, Czech Republic, Slovakia, Hungary, Romania, Bulgaria, Poland, Greece, Croatia, Bosnia, Macedonia, Montenegro, Slovenia), Moldova still rests - there was only one oligarch Plahotniuc left. There are a lot of plakhotnyuk in Ukraine, so here the war dragged on. Our backsliders do not want, they will lose their own, albeit small, but trough.

The hand of the Kremlin. But what about without her?

But what made our iron guys (and two young ladies) from the KSU, raising the visor, rush under the enemy tanks? They are not immortals, and they do not have Connor Macleod in their family. To make it clear that this is not an allegory, I will remind you that some claims for consideration by the CCU, filed much earlier, are still pending consideration, and this one has already been considered. And the time was not just chosen, quite by accident, right on the eve of the elections in America (well, there is definitely no time for Ukraine!). You will find the answer if you reread the previous paragraph. Good, as you know, triumphs over evil (good is calculated in monetary units). This truth was not invented by me. And great good overcomes great evil. One has only to look at the list of deputies who have filed this lawsuit with the Constitutional Court for the recognition of the norms of the Law "On Corruption" as unconstitutional, and the box will open. And there are all familiar faces. 47 deputies from the factions of Medvedchuk's HLP and For the Future (the latter do not even hide their connection with Kolomoisky). No wonder, it turns out, that all the regular gun-looters and sorosets from Zelensky's entourage dragged on their old song about the hands of the Kremlin. Again, it turns out that Putin beat everyone! And how cleverly he covered everything, the mosquito will not undermine the nose. And everything is within the law. And Vova Zelensky was outside of him. And he continues to persist in this.

Well, come on, come on, Volodya, build a wall near which you will be shot. If you do not live, it seems, until the second term, you will be finished on the first. And Benya Kolomoisky, whom you so shamelessly threw, will end. Putin will simply submit cartridges. Nothing personal, just like that. Well, the guys from the KSU, I think, have already earned for their old age, you can fire. Benya has already taken care of them. And he struck you out of his will. Although the money seems to be useless for the deceased. Well, let's not talk about sad things.
Ctrl Enter
Noticed oshЫbku Highlight text and press. Ctrl + Enter
We are
"We must beat first": the geopolitical alignment around Russia is continuously deteriorating
Ten "defeats" of Putin
Reporterin Yandex News
Read Reporterin Google News
9 comments
Information
Dear reader, to leave comments on the publication, you must sign in.