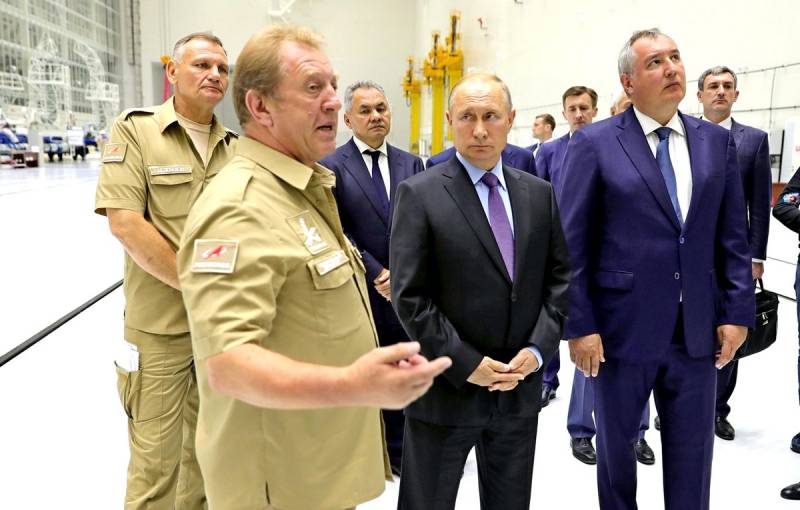 The Russian space industry is facing big changes. From the state it will begin to drift more and more actively towards the private one. Such far-reaching conclusions can be drawn from the public discussion between President Vladimir Putin and the head of Roscosmos Dmitry Rogozin on the problems that have arisen around the key programs.


It has been known for a long time that not everything is going well in the state corporation. For some reason, holes are drilled in the casing, filling them up with chewing gum, and the sensors are placed upside down, causing missiles to fall, etc. All this in aggregate from the outside gives the impression of a real mess. At the same time, competitors are not asleep. Under pressure from American corporations, Russia is gradually surrendering its traditional positions in space. And so President Putin drew his highest attention to a number of key projects of Roscosmos:

Roskosmos was instructed to prepare a number of new programs, including those aimed at developing a super-heavy rocket complex, at creating a space constellation within the framework of the Sphere project, as well as at further developing the GLONASS system.
What is wrong with these projects, let's try to figure it out.

A promising domestic super-heavy rocket was named Yenisei. It is a key element of the Russian lunar program, the first super-heavy launch vehicle developed since the collapse of the USSR. From the Vostochny cosmodrome in 2028 it should deliver 100 tons of cargo to low-earth orbit, and 27 tons to the earth's satellite. On its basis, by adding an additional stage, it is possible to create an even more powerful carrier rocket "Don", whose carrying capacity will be 140 and 33 tons, respectively.

This all sounds very cool and ambitious. But there are two big problems. Firstly, the project cost is estimated at about 1,5 trillion rubles. This is practically the entire budget of the federal space program for many years, which is already being cut due to the reduction in federal budget revenues. Secondly, let's face it, there is no work for a super-heavy rocket in the foreseeable future. To imagine that in just 8 years a Russian cosmonaut will set foot on the lunar surface is overly optimistic. This does not mean that Russia does not need a super-heavy launch vehicle, on the contrary. You just need to really correlate space ambitions with the financial capabilities of the country, which is constantly losing its position in the hydrocarbon market, and set realistic goals and objectives.

This is a promising federal program for creating its own satellite constellation of 638 vehicles. According to other sources, the total number of Russian satellites will slightly exceed 500. Sphere replaced the Ether satellite system. Last year, the construction of a plant began in the Moscow region, which from 2022 should produce spacecraft for it. According to the state procurement website, the cost of some rockets for launching satellites into orbit will amount to 324,27 billion rubles. The sums are very impressive, while some experts point out that the Russian system will not be able to be considered a full-fledged competitor to Western projects, and also will not be able to find foreign customers for its services in order to make it commercially viable.

These projects turn out to be very expensive, but necessary. It is noteworthy that President Putin and the head of Roscosmos decided to talk “about money” not behind the scenes, but in public. Perhaps in this regard, it is worth paying attention to the words of the head of state about the need to attract private funds to the industry:

I would like to add that in order to achieve the goals facing the Russian rocket and space industry and the complex, it is necessary to more actively use the instruments of public-private partnership, to attract, where possible, extra-budgetary and borrowed funds. Carefully, of course.
It is not excluded that we are talking about some "neat" form of privatization of the state corporation, more precisely, some of its commercially attractive projects. Let's remind that in our country for many years the project of the manned spacecraft "Federation" was developed, which was later renamed into "Eagle". It has not yet "hatched", but a year ago in the Moscow region the company "Reusable space transport systems" was registered with an authorized capital of 400 thousand rubles. Coincidentally, its general director Dmitry Kakhno is a top manager of one of the subsidiaries of Roscosmos. A young and unproven company boldly began cooperation with the state corporation in the development of a private reusable manned spacecraft "Argo". It is clear that the ship will be based on the developments under the Eagle project, and MTKS intends to earn $ 500 million from the operation of its truck.

It is possible that about such a "neat" privatization of technologies "Roskosmos" and will be further discussed. And so the soil was prepared through the media.
Reporterin Yandex News
Reporterin Yandex Zen
25 comments
Information
Dear reader, to leave comments on the publication, you must sign in.