Ukraine turns into a springboard for destabilizing Belarus 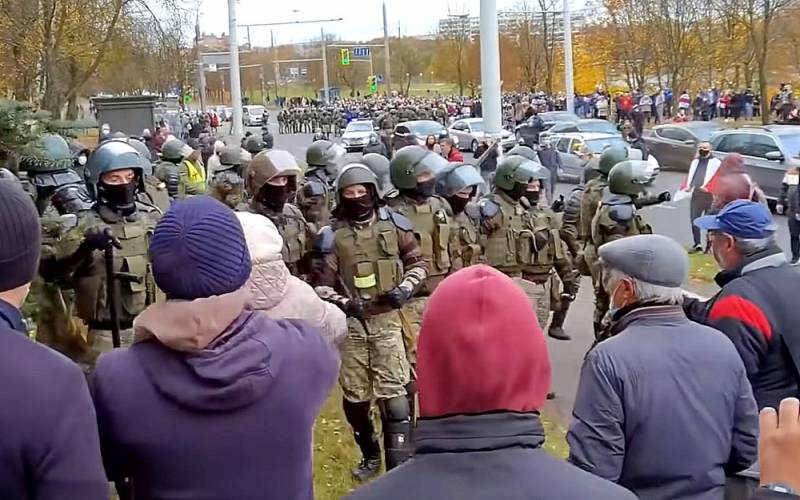 What many experts warned about has come true. Ukraine has not only become a part of the "anti-Belarusian front" of the West, but is turning into one of the springboards for the destabilization of the neighboring state, which has long remained friendly to it, no matter what. Once again, Kiev, forced to choose between its own state interests, economic expediency, arguments of common sense and orders of Western "curators", made a choice in favor of the execution of instructions suicidal for him.


What could be the consequences for both states, and what should Russia do about this?

As a matter of fact, the fact that Ukraine, which has been in the full power of the "Maidan" and their puppeteers from the United States and the European Union since 2014, will take a negative position regarding the extremely tough and consistent fight against its own "Maidan" Alexander Lukashenko, was predictable from the beginning. However, there were still options. For example, the official representatives of the “nezalezhnaya” could be smart enough to broadcast the minimum “doses of condemnation” necessary to obtain the approval of the West, or even keep silent. Like, Belarus is a sovereign state and we do not meddle in its affairs. At first, apparently remembering how he courted the "dad" during various meetings that took place earlier, Volodymyr Zelenskyy tried to do just that. Sluggishly mumbled something about "the inadmissibility of violence" and "the need to listen to the voice of the people", but "go over to faces" and make categorical judgments that burn political "Bridges" was wary. But the music did not play for long ...

On the one hand, the comedian president is constantly under the strongest pressure from the "Maidan patriots" who never tire of killing him for the next "zrada". On the other, and more importantly, he, like a trained dog, is forced to carry out the commands of those who are able to remove him from his current post, even without making any special efforts. In the end, everything came to the conclusion that the Verkhovna Rada of Ukraine adopted an official resolution in which the presidential elections in Belarus were declared "illegitimate" and spoke of the unconditional support of the sanctions imposed on this country by the European Union. To this (obviously in the form of a demonstration of an extreme form of cynicism) were added words about "respect for sovereignty" and "a brotherly state, culturally and spiritually related." God save us from such "brothers" ...

In the same document, by the way, the parliamentarians of the “nezalezhnaya” declared that they “resolutely reject” accusations from Minsk of “involvement in the destabilization of the situation” in the neighboring country. In fact, even at that stage, such statements were nothing more than the most shameless lies - after all, behind there was a provocation with the "Wagnerites", organized to a large extent by the forces of the Ukrainian special services. This vile story almost drove a hefty wedge between Belarus and Russia (which, in fact, was the expectation), and if not for the wisdom and vast experience of the leaders of both countries, it could have ended very badly - for Lukashenka, first of all. In addition, the fact that in the protests raging on the streets of Belarusian cities a significant role is played by militants and provocateurs specially trained outside the country, including on the territory of Ukraine, already then openly spoke the heads of the special services and high-ranking politicians both in Moscow and In Minsk.

In Kiev, on this occasion, they tried to build offended innocence, “making big eyes” in response to even the simplest questions such as why are frightened Belarusian “zmagars” so amicably giving a go-getter not only to Poland and Lithuania, but also to Ukrainian territory. Be that as it may, but sooner or later the "awkward" of the direct participation of the "nezalezhna" in stirring up unrest among the neighbors was bound to get out of that leaky information "bag" in which they clumsily tried to hide it. It got out - today subversive work against Minsk is being conducted in Ukraine quite openly. Recruiting to the relevant structures is carried out, without further ado, directly through job sites. And what kind of organizations are they?

NEHTA in Ukrainian? Or something worse?

First of all, we are talking about the organization Free Belarus Center, presented in Kiev on September 22, which urgently needs project assistants, communications managers and similar personnel, moreover, which is typical, without reference to Belarusian citizenship. Anyone will do. The founder of this “office”, from one name of which not only its essence and goals, but also its true owners are absolutely clear, is the Ukrainian public organization “Center for Human Rights ZMINA” (zmina is a change in Russian, respectively). To tell the truth, the list of donors presented on the official website of this NGO is not only impressive, but leaves not the slightest reason for any doubts: the Swedish Embassy, ​​the Czech Embassy, ​​the Netherlands Embassy, ​​the British Embassy, ​​the OSCE, the EU Delegation to Ukraine , the International Renaissance Foundation, which is the main structure representing George Soros in this country. Well, and to top it all off, the US State Department. This is so that there are no more ambiguities ...

So far, the FBC is behaving quite modestly - at the moment it has been declared only about its readiness to "provide free legal and psychological assistance to refugees from Belarus." Well, the fact that the services of lawyers around the world are not cheap is common knowledge. But regarding the "psychotherapy sessions" offered for "victims of Lukashenka's repressions" in the amount of 10, and absolutely free of charge, it is worth clarifying: a visit to a qualified psychologist in Kiev costs, on average, about 3 thousand rubles. This is the very minimum. Someone (it is indicated above - who exactly) does not skimp on such an "expensive pleasure". However, there are serious concerns that after a dozen sessions of "psychotherapy" with its participants will happen what is colloquially called "brainwashing". You know, methods are known and there are specific precedents - in Ukraine, as well.

However, we will not build versions and assumptions, let's talk about quite real directions of subversive work against Minsk, which the Free Belarus Center is already mastering. Its coordinator, Polina Brodik, a resident of Minsk, who lives in Kiev, announced her intention to establish generous "scholarships" that will be paid primarily to "opposition-minded Belarusian journalists." However, funding will also be transferred to other citizens of this country who "wish to increase their level of competence." In what field? There is no doubt that in this case we are talking about the device of the "Maidans" and "the fight against the criminal regime" by any available means. That is, we have a completely open recruitment and training of future “leaders” and “fighters” both for the “color revolution” that is now dying out in Minsk, and for new attempts to arrange it in the same country. According to Brodik, this program "will allow Belarusian activists and media workers to work in Ukrainian and foreign specialized organizations in order to gain new knowledge and experience."

The first thing to expect for Lukashenka is the emergence of new Internet resources and telegram channels, created and run by the model of the infamous HEXTA, which with tenfold force will begin to “blow” Maidan poison into the ears of Belarusians, only from the Ukrainian territory. As for the "activists" who will later work "in the field", organizing and directing riots in the right direction, trainings for them are already underway in Kiev. "Women's marches", invariably ending in a rage under the embassy of Belarus by the same Polina Brodik, have been held in the Ukrainian capital since August. By the way, Anton Rodnenkov, who fled to the “non-cash”, and the adviser to the member of the Belarusian “Coordination Council of the Opposition” Pavel Latushko, Yulia Kaminska, immediately joined the FBC.

By the way, the same Latushko recently announced the intentions of the imposters he represents to create outside Belarus not only a "government in exile", but also "alternative embassies" of the country. Just imagine, they "will publish the relevant documents for Belarusians abroad." It is completely incomprehensible who will need such filthy letters, made up by a bunch of scammers and not having the slightest legal force. But in Kiev, it seems, the process of creating just something similar is in full swing - a kind of “Belarusian opposition representation” as opposed to the official one. As you might guess, the authorities of the "nezalezhnoy" not only turn a blind eye to all this mouse fuss, but also indulge it in every possible way. Well, they would try to do something against the structures behind which Soros and the State Department stand ... Most likely, Ukraine is now playing the role of a "alternate airfield", to which some operational bases and units of the anti-Lukashenka project can be moved from Poland, engulfed in large-scale protests ... Kiev, as usual, lags behind Warsaw, clearly following its aggressive policy, but forgetting at the same time that Ukraine, unlike Poland, is not a member of the EU and NATO.

Interestingly, Lukashenka, who has recently quite naturally changed his attitude towards the "non-profit" and its leadership from very friendly to almost openly hostile, may, as has been said more than once, punish Kiev quickly and painfully - at least by cutting off supplies there fuel. Belarus is not Russia, and if the "dad" gives the command to "turn on the tap," it will be shut off instantly and dry. In this case, not only ordinary motorists run the risk of being left without fuel, but, above all, the Ukrainian army. Perhaps Zelensky was offered some alternative in the West in case of such a turn of events, or perhaps not. Recently, Kiev is increasingly being given to understand that it must deal with its problems on its own, even if they arise as a result of diligent execution of the instructions of the "curators". A sure sign that Ukraine is already ready to "write off", finally using it to the maximum for exclusively destructive purposes.

Perhaps it is high time for Minsk and Moscow to ponder over the development of a joint plan of decisive and coordinated actions regarding the “neighbor”, which brings more and more problems and becomes a source of “headache” for both capitals.
Ctrl Enter
Noticed oshЫbku Highlight text and press. Ctrl + Enter
We are
"We must beat first": the geopolitical alignment around Russia is continuously deteriorating
Ten "defeats" of Putin
Reporterin Yandex News
Read Reporterin Google News
4 comments
Information
Dear reader, to leave comments on the publication, you must sign in.