The end of the "Russian spring": Donbass offers to surrender 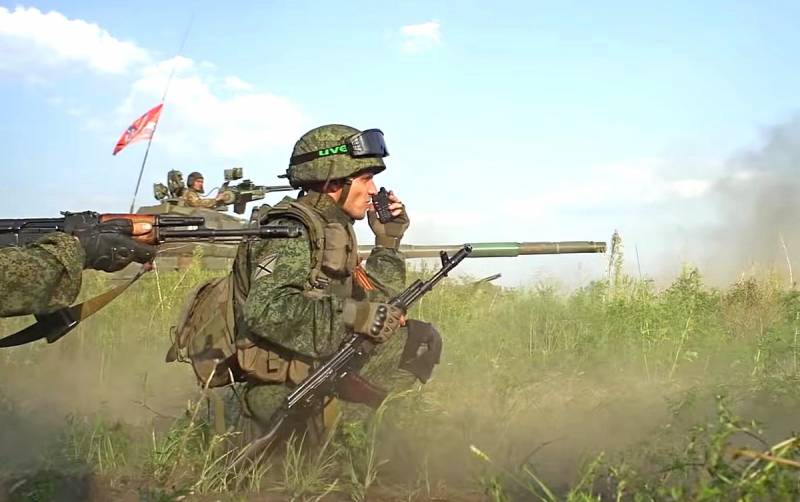 On October 14, at a meeting of the Trilateral Contact Group in Minsk, representatives of the DPR and LPR presented the so-called Roadmap for peaceful resolution of the conflict. Boris Gryzlov, Russia's plenipotentiary envoy to the TCG, described this document as "a comprehensive plan for a step-by-step settlement of the conflict in Donbass", which "fully complies with both the previously reached Minsk agreements and the relevant UN Security Council Resolution." In fact, this is a plan of surrender, a more or less honorable surrender of all those positions for which, since 2014, there was a bloody civil war.


Why did it happen that the die-hard inhabitants of the region rebellious to the Kiev putschists, who, regardless of losses, all these years with arms in their hands defended their right to be a part of the "Russian world", and not Bandera Ukraine, today are ready to humbly return to its fold, relying on certain “guarantees” and “agreements” that the “post-Maidan” authorities violate as easily as they give? What is it - war weariness, loss of faith in Russia or a bitter insight that came to the republicans after the current events in Nagorno-Karabakh? Let's try to figure it out.

The proposals of the Donbass representatives are, in fact, a repetition of the provisions of Minsk-2, which have been corrected in some places, in some places somewhat curtailed, and in some points significantly expanded. They consist of one and a half dozen points and, of course, we will not consider all of them in detail here. Let us dwell, first of all, on the most significant ones, paying special attention to the places where concessions are made to Kiev on the most key positions. First of all, the “special status”, around which so many copies have been broken in recent years, is given not to the entire Donetsk and Luhansk regions, but only to their “separate areas”, which are now beyond Kiev's control. On the one hand, it seems to be logical, but on the other hand, the Republics agree to the derogatory status of ORDLO, which has long been transformed into the mouths of the Ukrainian authorities and politicians into a curse. Furthermore! Even these territories are not assigned a "special status" forever, but until 2050. After that - on a general basis.

On the other hand, according to the proposals presented, the status of these very "separate regions" can be changed only as a result of a referendum held on their territory, in which only persons who have lived there for at least 5 recent years will be able to take part. Such a plebiscite can be organized only in the period from 2045 to 2049 - not earlier and not later. We admit that this looks like a manifestation of either blatant political naivety, or as a deliberate surrender - after all, there is no doubt that Kiev, which has firmly laid its paws on Donbass, will not be difficult to "draw" such results of the expression of the will of its inhabitants as it pleases. However, it will hardly come to this ...

If everything goes as it is written in the presented plan, no referendums will be required. Even more unrealistic, and what is there, is the expressed consent of the DPR and LPR to the withdrawal of "foreign armed formations" from their territories and "the disarmament of illegal paramilitary groups, carried out under the auspices of the OSCE." That is - the army corps there will go under the knife, the Republicans will renounce the volunteers who fought on their side ... And what will they be left with? With the "People's Militia", which, as they expect, Kiev will recognize and even adopt an appropriate law - on the division of powers between it and the National Police of Ukraine? Blessed is he who believes. By the way, based on what was written in the proposals, in Donetsk and Lugansk, in all seriousness, they are also expecting legislative consolidation of the inadmissibility of not only persecution, but also “discrimination” by Ukraine by its law enforcement agencies and the authorities of “participants in the events in Donbass”. And at the same time - changes or even abolition by Kiev of the most unacceptable for the region laws of Ukraine: on education, on the state language and on the reintegration of Donbass. In general, this is not something that is completely unscientific fiction, but some kind of naive dreams and dreams.

Even more unrealistic (although, how much more ?!) is the clause that any formations of the Ukrainian army on the territory of "certain regions" can be deployed only "with the consent of the Donetsk and Lugansk district councils", and "residents of other territories of Ukraine" to arrange any mass actions there as well, only if they are allowed by the local authorities. So they will ask you ... There is a feeling that all the listed points of the proposals were written either by incorrigible dreamers or notorious traitors. However, this is not all.

Is the salvation of Donbass in Ukraine's greed and cruelty?

The list of concessions does not end at the points mentioned above. Thus, representatives of the LPR and DPR promise to "withdraw their administration" from the previously nationalized enterprises. That is, in fact, to return them to their former owners - the Ukrainian oligarchs. And finally, perhaps the most important thing: in the former for a long time the main stumbling block in any negotiations on the issue of transferring control over the border with Russia to Kiev, the Republicans also “surrender”. They agree to carry out this extremely exciting Kiev process not after the adoption of amendments to the Constitution of Ukraine and the establishment of a permanent (albeit for 30 years) "special status", as it was written in "Minsk-2", but just two months after holding local elections "recognized by the OSCE". All this time, the legislative changes, which are so relied on in Donetsk and Lugansk, will have the status of temporary. They should become part of the Basic Law "nezalezhnoy", again, after the elections in Donbass. But will they?

Something tells: Kiev will not hesitate with the "cutting off" of the region from Russia, but with the final approval of the laws, for each of which both the president and the parliament will simply be torn to pieces by nationalists, "ATO veterans" and other "patriots "Are unlikely to hurry. It is much more likely that they will simply be "buried" under one or another plausible pretext. And even without it at all, appealing to the "voice of the people." By the way, all the actions of the Kiev authorities, including the latest steps taken by its representatives, testify precisely in favor of this version, and not the wonderful dreams of the republicans. They are really going to "reintegrate" Donbass there - the only question is, by what methods and by what scenario.

An exhaustive answer to these questions, it seems to me, is given at least by the fact that the Deputy Prime Minister of Ukraine, who is at the same time also the "Minister for the Reintegration of the Temporarily Occupied Territories", Oleksiy Reznikov recently made an official visit to Zagreb, who can be called iconic. During his stay in Croatia, he was busy with an extremely important matter - a careful study of her experience regarding the “de-occupation and reintegration of the occupied territories”. At the same time, Reznikov, persistently sinning against the truth, called the entry of the Serbian Krajina into Croatia a "peace process", absolutely not mentioning the operations "Lightning" (1994) and "Tempest" (1995) conducted by the Croatian army with the most active support of the United States and the European Union. ), as a result of which these lands, in fact, were “successfully reintegrated”. Subsequently, the Serbs who lived on them, despite all the generous "guarantees" and promises, received neither cultural nor administrative autonomy, nor, moreover, immunity. They simply survived from their historical homeland, forcing hundreds of thousands of people to emigrate. The rest have fully learned the "delights" of life as "second-class" people.

There is no doubt that a similar fate awaits the residents of Donbass, if Kiev agrees to the surrender plan proposed to it. "Special status", you say? How everything will actually be, is perfectly illustrated by the story that happened just the other day in Donbass Slavyansk, controlled by the Ukrainian side. There, the passengers of the minibus expelled an "activist" out of her, demanding to communicate with her exclusively on "mov" and trying to "download rights" on this matter. Not thrown out, but simply forced to leave the salon ... The Ukrainian police have already opened criminal cases against all of them - "for inciting hatred and insulting the feelings of citizens on the basis of language." People who did not want to endure the impudent "patriot" have a very real chance to get 5 years in prison.

To think that the rebellious part of Donbass will be allowed to preserve its identity, and even more so, self-government and at least some armed forces, albeit in the form of a “people's militia” or something like that, means, as they say, “to ignore »The reality of what today's Ukraine has become. Those who have time to find salvation on the territory of Russia will be happy - in the same Serbian Krajina, the Croats simply shot and bombed refugee columns, which, by the way, is not denied even at the UN. Kiev, obviously, is also ready to learn this "valuable experience". Paradoxical as it may seem, the only thing that can save the population of the Republics from the inevitable “sweeps” and the most severe terror is the greed and self-confidence of the Ukrainian side, which will certainly not want to agree with the DPR and LPR, even taking into account the more than generous concessions they have offered and compromises. And curators from the United States are unlikely to approve of such a path - they need a war in the East of Ukraine, in which they seek to involve Russia, and not the world, even if it is as “bad” as possible for Donbass.

Another thing makes me think about it - why did the DPR and LPR take a course of compromise and, in fact, surrender to Kiev? Perhaps, the evasive and half-hearted position of Moscow plays its role here, which, although providing the Republics with quite real assistance, nevertheless stubbornly insists on "the need to comply with the Minsk agreements." That is, about returning them to Ukraine. The last straw could be the conflict in Nagorno-Karabakh, in which Russia, being Armenia's military ally in the CSTO, again as much as possible removed from what was happening and made it clear that it would follow a policy of non-intervention. Perhaps the DPR and LPR simply do not want to become the second Artsakh, which is crumbling today under the blows of the Azerbaijani army, behind which Ankara is standing? Kiev has support, including military support, which is much more serious - the United States and Britain are still far from Turkey. And in the “de-occupation” of Donbass, the “nezalezhnaya”, not without reason, counts on their help.

Perhaps the Kremlin is right to avoid interfering in regional conflicts in the most careful way. Nevertheless, one cannot but state the obvious - the absorption of Donbass by Ukraine, which is extremely hostile to our country, will become a grandiose geopolitical victory for the West. And it will certainly put an end to the "Russian spring" and any claims of Moscow to influence in the so-called "post-Soviet space".
Reporterin Yandex News
Reporterin Yandex Zen
70 comments
Information
Dear reader, to leave comments on the publication, you must sign in.