"Everyone will sit down": the general strike from Tikhanovskaya failed 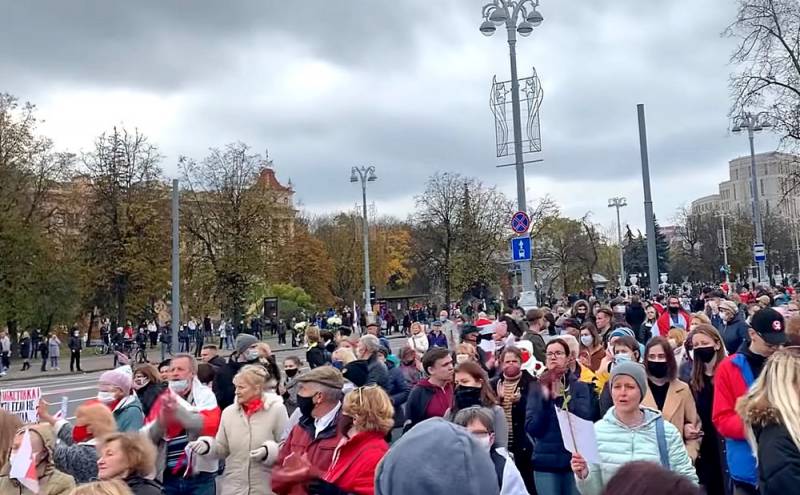 The “formidable” ultimatum of the self-proclaimed Belarusian “president” from Lithuania who demanded that the legitimate head of state Alexander Lukashenko hand over power to her on a silver platter with a white and red border no later than the 25th of this month, received a quite expected and predictable continuation. That is, practically nothing.


No, many representatives who do not want, contrary to reality and common sense, to stop the “protest carnival” of the public still continue to wander the streets of Minsk, as well as some other Belarusian cities and villages. Obviously, they are trying, according to the classics, to portray the ghost of a "democratic European future" into which the feisty "daddy" does not allow them.

Nevertheless, it is the last days that have most eloquently demonstrated that the Belomaidan has neither real support among the people, nor real prospects. However, this does not in the least give a reason to relax and show complacency about him.

The mountain that gave birth to the mouse ...

Appointed the next day after the expiration of the term of “unconditional surrender” of Lukashenka, appointed by the super-arrogant lady, in which she, of course, did not believe even for a moment, the next promenade of idlers bore the loud name “March of the People's Ultimatum”. On the sworn assurances of the "opposition" he gathered 100 thousand participants. This, of course, is unlikely, but due to the unusually gentle (as for the end of October) weather, a lot of people gathered. At the same time, those who, in reality, are behind the disgrace that has been going on for the third month, immediately decided to “transfer the fight to the ground”. That is, to arrange real unrest and provoke bloodshed. The plan was quite good - to distract the attention of law enforcement officers by attacking the Central District Department of Internal Affairs of Minsk, and then make a breakthrough along Orlovskaya Street to the President's residence. Well, and already there - "turn around to the fullest."

However, he did not succeed against the Belarusian "siloviks", who have recently significantly improved their skills in countering such actions. Stones and Molotov cocktails were thrown into the building of the regional department, but the matter did not move further - no one dared to take a real assault. But the crowd "rushing" along the Oryol was met as it should - with flash-noise grenades and rubber bullets. In the end, the "battlefield" again remained with the OMON fighters, who did not hesitate to "pack" a lot of particularly violent "demonstrators" who clearly had quite clear intentions and instructions that day. From whom exactly? You can draw your own conclusions - given that the US Embassy in Minsk, a day before the onset of the “X-hour” announced by Tikhanovskaya, urged its fellow citizens to make at least a three-day supply of food, water and medicine. And in general - "show increased vigilance" and be ready for anything. Judging by these instructions, a colossal "naughty" was planned. But - did not grow together ...

Another "protest Sunday" ended in about the same way as all the previous ones - stupid wandering through the streets, waving white and red rags and rides in paddy wagons for those who were especially zealous. Lukashenko and his supporters have once again demonstrated that they are not going to fulfill any demands of the impostors and are ready to defend their position actively and toughly. In theory (and according to Tikhanovskaya), literally the next day was supposed to begin ... No, what are you - to break out a nationwide strike, capable of "intimidating the dictator" and "crushing his regime." In fact, nothing started. Yes, yes, you guessed it - from the word "absolutely". At the same time, the “president of Sveta” with might and main roamed from the “Lithuanian far away” that “everything worked out”, that the Belarusians massively “showed heroism for the sake of a friend”, that “the factories did not start working so that a chain reaction of solidarity could work,” and the like. pretentious nonsense, obviously wishful thinking. In fact, nothing of the kind happened at all. State-owned enterprises (constituting an absolute majority in the country among any significant economic subjects) continued to work as if nothing had happened.

Belneftekhim operated in the normal mode. True, something incomprehensible was happening at Azot in Grodno, which the plant's management called “an imitation of a strike”. At "Belarusneft" there were as many as six heads of mournful "fighters" (employees of the field geophysical operations department), who announced "joining the general strike" and even recorded the corresponding video. Everything is fine - they were dismissed for absenteeism and now they can "strike" as much as they like, unlike their own sane colleagues. The same picture is observed all over the country - small flocks of people clustered at the checkpoints of some state-owned enterprises, stubbornly passed off by the "opposition" media as "protesters", as a rule, have nothing to do with those plants and factories around which they wipe. Bluff and cheating of the purest water.

The protests will continue! Under the blanket…

It is not for nothing that the Minister of Industry of Belarus, Petr Parkhomchik, declared with full responsibility: the calls of the "oppositionists" were ignored by the real workers, the country's economy did not suffer the slightest damage from the "strike movement", normal people are busy with their usual business. Absolutely similar information was announced by the Prime Minister of the country Roman Golovchenko, according to whom people "are determined to feed their families, and not follow those who want to harm the country and specifically them." Against this background, the previous statements of Tikhanovskaya, on the eve of the "national strike" expressing confidence that she would also be supported by "representatives of private business, IT specialists, cultural and sports figures and even religious communities", look, sorry, as a delusion of a mentally ill person. Yes, those of the Internet resources and Telegram channels, which with might and main "drown for protest" on the 26th, with great fanfare published lists of non-working private enterprises in Minsk. A couple of pizzerias, the same number of gyms, a dozen coffee shops ... What else is there? Oh yes - the ceramics studio Moonceramic, the climbing wall Plato and the pet store "Charlie" are closed. Well, it's certainly a collapse. The collapse of the economy and a terrible blow to the "criminal regime".

And, by the way, about the “IT specialists” on whom the “President of the World” was counting so much - the Seim of Lithuania, where she settled, after long talks about the need to “help Belarusian companies move to the country”, finally successfully failed the corresponding legislative initiatives ... Volodymyr Zelenskyy said something like that (simplifying the employment of IT specialists from Belarus), but after that the Ukrainian ambassador was summoned to the local Foreign Ministry in Minsk and demanded to stop violating international law and poke his nose into other people's internal affairs. Otherwise, we will quickly leave without fuel! The initiative has faded ... So those same "IT people", and they are usually not stupid people, I am sure, will soon understand that they of technologies it’s not bad at all, but it’s hardly worth "being led" on empty promises and provocations.

I want to terribly upset both the "president" and her entire pack - they have not the slightest chance of pushing Belarus into the abyss of the economic and financial crisis. And this is according to the assessments of those who, for the “oppositional” public, are the bearers of the truth in the highest instance. Thus, the International Monetary Fund, in its report on the trends of the world economy (World Economic Outlook, WEO), published literally last Tuesday, said that its analysts revised the forecast for Belarus for a radically better side. Back in April of this year, the IMF predicted a 6% drop in GDP for the country, but now it is about a 3% decline. Also, his analysts are much more optimistic about the prospects for inflation and other macroeconomic indicators in Minsk. The specialists of the international rating agency S&P Global Ratings are in solidarity with their colleagues from the IMF - in their opinion, there is not the slightest reason to doubt the ability of the Belarusian authorities to comply with and service their obligations on the state debt, including the Eurobonds issued by it.

In simple terms, the country is not even close to a default, and, according to S&P experts, not least due to the stable financial support from Russia. The bet of the "opposition", its Western masters and puppeteers, on the fact that in the country they are desperately shaking, there will be a collapse of the national economy, inevitably entailing not the tinsel "protests" of the drunken idlers, but already a real hunger riot, which they hoped to lead and direct to the right it was a bed. It is not for nothing that one of the "prominent revolutionaries" - a member of the presidium of the clownish "Coordination Council of the Opposition" Pavel Latushko made an appeal to his compatriots "to continue the fight against the regime" just yesterday, but no longer going to the streets, but "inside educational institutions, enterprises and other ". This, in his opinion, "will lead to the culmination of the process, the result of which will be the fall of the Lukashenka regime." Apparently, the next stage will be a “protest” under the covers. Well, or just a fig in your pocket.

“Maidan people” are well aware that they are losing. The "new course" voiced by Latushko testifies, in fact, to their forced rejection of street actions, in which, to put it mildly, they did not succeed. The fact that the "opposition" hypocritically "worries" about the Belarusians who are "substituted under the batons of the riot police" is pure pharisaism. Something that did not bother them much in the previous weeks and months, when everything was done precisely for the maximum escalation of the conflict. According to Andrei Serbun, Deputy Head of the Department of the General Prosecutor's Office for Supervision of Compliance with the Legislation of the Investigative Committee of Belarus, more than 500 criminal cases have already been initiated on the facts of organizing mass riots and participation in them. “We will identify each offender and give his actions an appropriate legal assessment” - said the law enforcement officer. So it turns out that, as it was said in the immortal comedy film, "everyone will sit down." Only in this case, most of the crooks-"leaders" will end up in the Baltic, Polish and other foreign countries, which are comfortable for them, where they are now leaving en masse, and those who these scoundrels have managed to "brainwash" and push them to violate the law will serve their sentences in harsh Belarusian colonies and prisons.

For those who have not yet managed to do things that "draw" on specific articles of the Criminal Code, it's time to follow Latushko's advice and "go on strike" only in their own kitchens. And it is better to stop doing stupid things altogether and completely unpromising search for "adventures" on your head.
Reporterin Yandex News
Reporterin Yandex Zen
13 comments
Information
Dear reader, to leave comments on the publication, you must sign in.