The future of Ukraine through Zelensky's eyes: cannabis and the Budapest memorandum to help 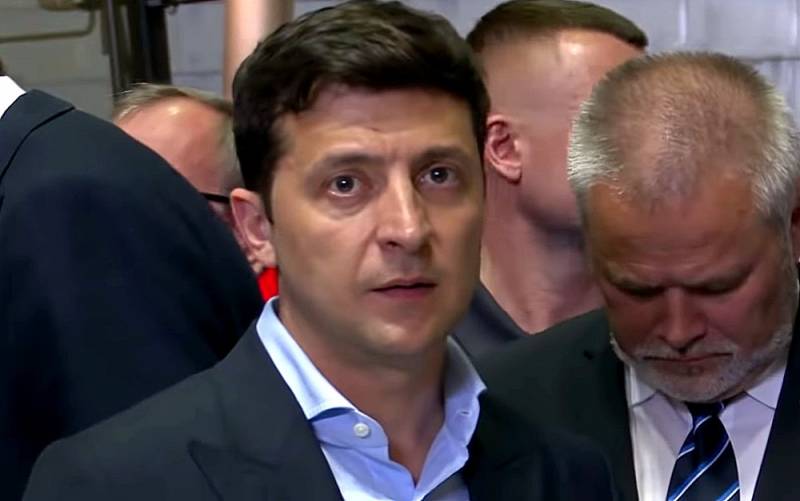 Results of European integration. In the 7th year of the hydration revolution, some results can already be summed up. The country is confidently moving towards becoming a cesspool of Europe. Without aircraft building, shipbuilding, motor building, rocketry, instrumentation, heavy and medium machine building, even without light industry, with the remnants of the food industry of a low conversion (we can still make sunflower oil, but we no longer have to pack it for sale in the EU), but with a legalized gaming business , prostitution and cannabis for medical purposes (the last two points are now being discussed in the Rada and put to a popular vote).


From the automotive industry, only large-scale assembly of Chevrolet in small series at ZAZ and the production of cables, electrical wiring and some other low-value nonsense for European auto giants remained (all these small enterprises, 8 in number, are located in Western Ukraine). KRAZ stands, produces 10 cars a year for the needs of the army, LAZ was razed to the ground.

The country is rapidly turning into a great agrarian power, producing low-value-added products with low added value, for which a small number of workers are in demand. That is why the majority of the population is marginalized and wanders around the country and neighboring countries in search of work. Therefore, the work of a prostitute or a servant of European masters is considered prestigious for women (not everyone is still taken into prostitutes, this is the lot of the young, and the elderly only take out pots and wipe their asses for white gentlemen from Italy and Germany), and for men, service in the ATO or picking strawberries in Poland is the only job opportunity. Working as a plumber or tiler in Germany is generally the ultimate dream, but the sneaky coronavirus has nullified this possibility too.

Therefore, in the near future, Ukraine runs the risk of occupying the place of a great agrarian power in the European food chain, producing exclusively cannabis for medical purposes. Already now I see these fields from edge to edge, sown with hemp, and the local population with all the signs of degeneration and dementia, but cheerful and cheerful. Life is good! This is the lot of all banana republics. It's just that some specialize in growing coconuts and bananas, and we have been entrusted with the honor of growing hemp for white gentlemen. This is the contribution of the already cheerful new president to the global distribution of labor. The country's status under Zelenskiy has grown, but the level of decision-making has somehow dropped. If under the former unhappy president we were occupied by officials of the rank of US Vice President and Assistant Secretary of State for European and Eurasian Affairs, then with the current merry president, for some reason, this has already been left at the mercy of petty clerks of the US Embassy in Ukraine with a rank of no higher than 2nd secretary, who run the local colonial government, sometimes without even leaving the embassy building on Sikorsky Street.

At the same time, Vladimir Putin can take as many steps as he wants to meet Ukraine, but as long as it is ruled by US Charge d'Affaires, and Vova Zelensky does not leave the MI6 office, his attempts are doomed to failure. But first things first.

Another epic trash with the removal of furniture in the country of ever-green tomatoes happened after the visit of the leader of the HLS, Viktor Medvedchuk, to Moscow and his conversation with the head of the Russian state, during which Putin spoke in favor of restoring the Russian-Ukrainian relations destroyed by the past Ukrainian government, and agreed as a gesture goodwill to lift sanctions on a number of Ukrainian enterprises. After that, a uniform hysteria occurred in Kiev, and the National Council on Television and Radio Broadcasting began, in relation to the channels that showed this story, a check on the fact of the incorrect appearance of the Russian leader on the TV screens of Ukrainian citizens.

The dissemination of such information in the Ukrainian media is aimed at creating a positive image of V. Putin, humanizing and popularizing the organ of the aggressor country in Ukraine, which can pose a threat to the national interests and security of Ukraine in the information sphere, since it has significant potential aimed at undermining the defense capability, demoralizing servicemen The Armed Forces of Ukraine and other military formations, provoking extremist manifestations, feeding panic, exacerbating and destabilizing socialpolitical and socialeconomic situations, inciting interethnic and interfaith conflicts in Ukraine.
This is what I quoted from the official document. This is the kind of swill they feed the people of Ukraine, and you are still surprised that they are being built in a column of eight and go to fight en masse with their saber-toothed northern neighbor. On Medvedchuk's TV channels Z ZIK, 112 Ukraine and NewsWan, unscheduled checks began, they are charged with showing the story without comment. Those. did what they had to do - they just submitted information.

And Putin - this is not enough for him, he also offered his vaccine against COVID-19 to Medvedchuk. Well, what are you going to do with him, the bastard? There is no way to get rid of any negative connotation, how can the Ukrainians be explained that the Russian vaccine is bad because it is cheap? We will wait for the American one, dear, but it is not there yet.

With the vaccine it has generally come to insanity. As soon as they heard about the Russian vaccine, the American embassy was alarmed. Health Minister Stepanov was immediately summoned to the carpet, after which the following message appeared on the Embassy's Facebook: “Yesterday, Chargé d'Affaires of the United States Christina Queen invited Minister Stepanov to a constructive collegiate dinner to discuss the fight against COVID-19 and reforms in the health sector. Ukraine will NOT buy the Russian vaccine against COVID, which has not passed clinical trials for safety! "

You have not confused anything. Capslock was taken over by the US Embassy. In arshin letters - NO! Everything is fine here, from the level of an official who deals with Ukrainian affairs at the US Embassy, ​​to the names and surnames of the characters. Some temporary attorney clerk, not even an ambassador, summons a whole minister to his carpet, who did not even bother to name himself, just Minister Stepanov, while the young lady loves herself - Christina Queen decided to dine with the minister of the banana republic, after which That happened indigestion and he reconsidered his attitude to the Russian vaccine. And Christina, after dinner at her FB, with a sense of accomplishment, without any hesitation, wrote:

Ukraine will not buy a vaccine from the Russians, die, you scum, until we drive you for big money !.
Well, I translated it for you from diplomatic to public. Sovereignty, say aha! We saw such sovereignty in the grave. And this is not a metaphor.

Then the main comedian of the country came to the fore and asked the country the five most important questions. In which he proposed to discuss the creation of a free economic zone in the occupied part of Donbass, reducing the number of deputies to three hundred, the introduction of life imprisonment for corruption, the legalization of marijuana for medical purposes and the use of the Budapest Memorandum to restore the territorial integrity of Ukraine.

The meaning of this whole action is pure PR. On October 25 in Ukraine, elections to local councils and the president became concerned that his servants of the people risked flying past all the seats, so he decided by this to raise the turnout, and if he was lucky, the rating. The youth, according to him, we have a horror as for cannabis, they are the first to come running for this matter and vote for greens in the literal and figurative sense of the word.

There is no point in seriously discussing the questions asked. The first is designed to show in disguise that the president is concerned about the problems of Donbass. So worried that for 1,5 years he did not do anything about it. There was nothing even to ask the second question, people had already spoken for this when they voted for the Good Clown, what else is there to ask? Everything is in your hands - cut down to at least 100 people, just work, and don't play the fool. It's not even funny with corruption. Life imprisonment. Yes, let's just shoot from a large-caliber machine gun right away. More like a fight between mice and cheese. There is corruption in Ukraine, but for some reason there are no corrupt officials. It is difficult to combat the phenomenon when the fight against corruption is headed by the corrupt officials themselves.

Opinions are divided regarding cannabis. Here is what the people of Kiev think about this.


For me, this is generally the general line of the party, the legalization of marijuana and, as a result, Ukraine, sown far and wide with hemp. The idiot's dream of a great agrarian country has come true. Life is good! The last question about the Budapest Memorandum is completely meaningless. None of the Ukrainians seem to have read it. And if I had read it, I would have known that according to paragraph 4 of this document

The signatory countries of the Russian Federation, the United States and Britain undertake obligations in the event of the use or in the event of a threat of use against Ukraine of nuclear weapons (the very one that Ukraine, according to the memorandum, has reduced) to apply to the UN Security Council with demands to provide assistance to Ukraine.
End of quote. Has anyone used nuclear weapons against Ukraine? No! Maybe someone threatened to use it? Also no. So how was Mr. Zelensky going to use this memorandum to restore the territorial integrity of the country, destroyed by anyone? By the way, as is clear from this document, even if, God forbid, someone would risk using nuclear weapons against Ukraine, the signatory countries are not at all obliged to abandon everything and punish the vile aggressor with their father's belt with an iron buckle, but only can appeal to the UN Security Council, let him think what to do with it. If you have reduced your nuclear weapons under this piece of paper, so who is your doctor ?! In general, everything is sad ...

This concludes the review of events in the country of evergreen tomatoes. Peace for everyone!
Ctrl Enter
Noticed oshЫbku Highlight text and press. Ctrl + Enter
We are
"We must beat first": the geopolitical alignment around Russia is continuously deteriorating
Ten "defeats" of Putin
Reporterin Yandex News
Read Reporterin Google News
6 comments
Information
Dear reader, to leave comments on the publication, you must sign in.