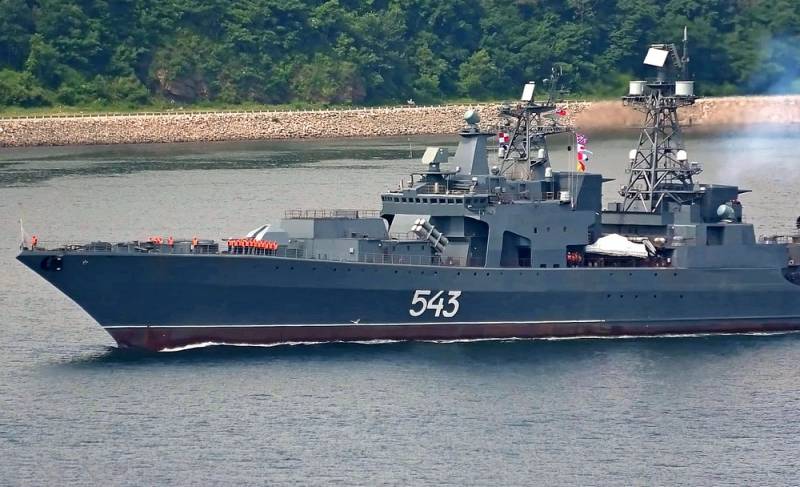 The shortage of ships in the far sea zone of the RF Ministry of Defense has to be addressed in the most extraordinary ways. It got to the point that small missile ships, originally intended to protect large rivers and inland waters, are sent to the Mediterranean to perform real combat missions. To fill these holes in the Navy now has to be due to the deep modernization of the old Soviet frigates.


We are talking about the modernization of large anti-submarine ships (BOD) of the project 1155 "Udaloy", or the destroyers of ASW according to NATO classification. After the upgrade, thirty-year-old veterans should turn into guided missile frigates (URO), designed, in theory, to compete with the American destroyers of the Arlie Burke class. Back in 2013, retired admiral Vladimir Zakharov said:

The new destroyer of the far sea zone, which will be able to replace the "Udalykh", will appear no earlier than 2020. New ships of such a displacement as the BOD 1155 are not even in the project yet. And from modern ships, only the frigates of Project 22350 have such functions as it has.
As it turned out recently, unfortunately, we have given up on the destroyers of the far sea zone in the foreseeable future. All that remains is a deep modernization of what is left of the USSR Navy. Taking into account the fact that the cost of converting an outdated anti-submarine ship into a URO frigate is estimated at 1 to 2 billion rubles, the decision is not the worst. According to some reports, a promising Leader-class destroyer would cost the budget 100 billion rubles. So, what do we have at the moment.

BOD project 1155 began to be built in the eighties of the last century. In terms of size, displacement, autonomy and speed, the Udalye are roughly comparable to the Arleigh Burks. A total of twelve frigates were built, divided in half between the Northern and Pacific fleets. Eight anti-submarine ships have survived to this day, which now began to turn into URO frigates. BOD "Marshal Shaposhnikov" after modernization was recently called by The National Interest as "armed to the teeth." How true is this?

Shaposhnikov is an honored veteran. It was built in a uniquely tight timeframe: it was laid down in 1983, launched the next year, and in 1985 it already pulled the strap in the Pacific Fleet. The frigate fought pirates in the Indian Ocean, conducted convoys in the Persian Gulf, and was noted in Africa and Asia. He embarked on a deep modernization in 2016 in the Far East. It now has universal launchers that carry 16 Caliber cruise missiles. They can also be used for missiles "Onyx" and hypersonic "Zircons". To combat enemy ships, there are Uranium anti-ship missiles with 8 X-35 missiles. Two anti-submarine helicopters remained on board. Installed modern electronic systems and an electronic warfare complex.


The combat capabilities of the old ship have really increased significantly. It is clear that in terms of the number of missiles on board, Project 1155 frigates cannot compete with the Arleigh Burks, and the missile defense system is also significantly inferior to them in terms of characteristics. However, the modernized "Udalye" will be able to strike at ground targets, destroy surface ships and enemy submarines for all the money invested in them. The addition of hypersonic Zircons on the BOD will make even outdated frigates a force to be reckoned with. "Marshal Shaposhnikov" and his brothers in arms will still serve the country, but it is obvious that the problem of the shortage of ships of the first rank must be addressed comprehensively.
Reporterin Yandex News
Reporterin Yandex Zen
11 comments
Information
Dear reader, to leave comments on the publication, you must sign in.