"Road Revolution": Is Russia Making a Mistake in Giving Construction Projects to the Chinese? 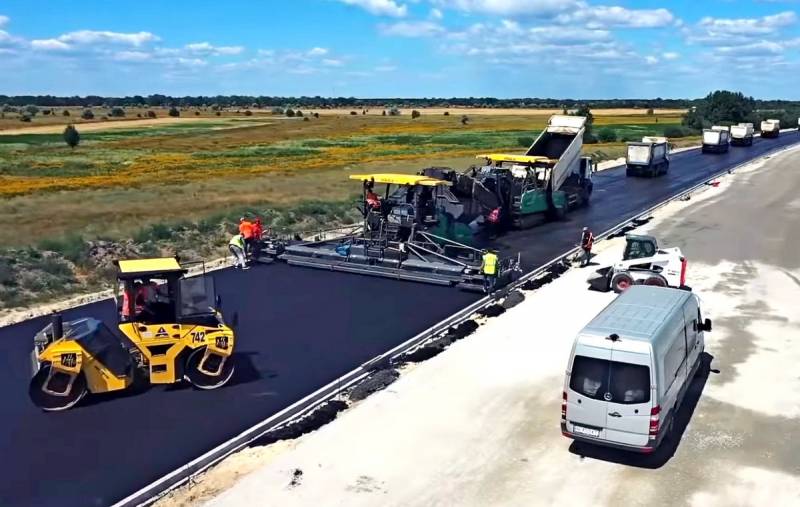 The Chinese company will start building highways in Russia. The result can be estimated already by 2024. Considering the speed with which kilometers of highways are stacked in the PRC, domestic builders have something to think about.


First of all, it should be pointed out that this decision to allow the Chinese for Russia is largely forced. There is an ambitious project of the international transport route "Europe - Western China" (MTM EZK), the total length of which is 8,5 thousand kilometers. Of these, the PRC accounts for 3,4 thousand kilometers, Kazakhstan - 2,8 thousand kilometers, and Russia - from 2,2 to 2,3 thousand kilometers. The Chinese have already practically built their part, but in our country, fools and roads still remain insoluble problems. We managed to build only the section of the M-11 “Neva” highway between Moscow and St. Petersburg, which was put into operation last year. This is understandable, the capitals are our priority.

Prime Minister Mikhail Mishustin announced the start of construction of the M-12 highway, which is part of this transport corridor:

Taking into account the special importance of the M-12 highway, the government sets the task of putting it into operation in 2024. We agreed on this today. The total amount of financing is over 650 billion rubles. These investments will give a significant return in the coming years after the launch of the highway.
To speed up the process, the road was divided into several stages, given to a number of Russian companies: Stroytransgaz, RSK, VAD, DSK Avtoban and Transstroymekhanizatsiya. The tender for the construction of the fifth stage (347−454 km, Nizhny Novgorod Region) was won by the Chinese company SiArCiC Rus, a subsidiary of CRCC (JSC Chinese Railway Construction Corporation). This is an important event that could be the first step towards solving the seemingly insoluble problem with Russian roads. Or maybe not.

On the one handChina today is one of the world leaders in the speed and quality of road and rail construction. The Chinese "road miracle" was formed from a combination of several factors: cheap labor, public-private partnerships in the form of concessions, active borrowing, including from abroad. These loans are repaid by road tolls, which are among the highest in the world, and by income from the use of roadside lands.

All this was multiplied by the hard work of the Chinese workers, ready to work in any conditions and at any time of the day, as well as by the most modern construction Technology... First, a cushion of sand and gravel is created, it is reinforced with metal reinforcement, poured on top with concrete, on top of which a thick layer of asphalt is laid. The quality is checked by a special commission, the warranty period for the road is from 15 to 25 years, and any repair is carried out at the expense of the contractor. Builders receive money for the work only after the completion of the process, so they are extremely interested in doing everything quickly and efficiently. That's the whole secret. If in Russia roads are built like this, then this can only be welcomed.

On the other hand, just about this there are some doubts. Chinese builders build well in China because they cannot build there otherwise. Anything is possible in our country. Will the same technologies be used here, control over the quality of construction and over the expenditure of budget funds? Will the contractor be charged with warranty obligations, as in the PRC, or will the Chinese work “in Russian” in the bad sense of the word? This is the key question.

In addition, as is customary among the Chinese, their firms often bring with them not only engineering staff, but also labor. This was the case during the implementation of a number of industrial projects in the Far East. That is, budget money will also be spent on wages for the Chinese, not the residents of Russia.

For us, the main thing is not even where the money will go, to China or island offshores, whether the Chinese will build or migrant workers from friendly republics, or whether good roads will finally appear in Russia. Now everything is in the hands of the CiarsiC Rus company, which can make a "road revolution", or it can turn out "as always". We will see.