Why Russia needs to quickly abandon the "post-Soviet space" 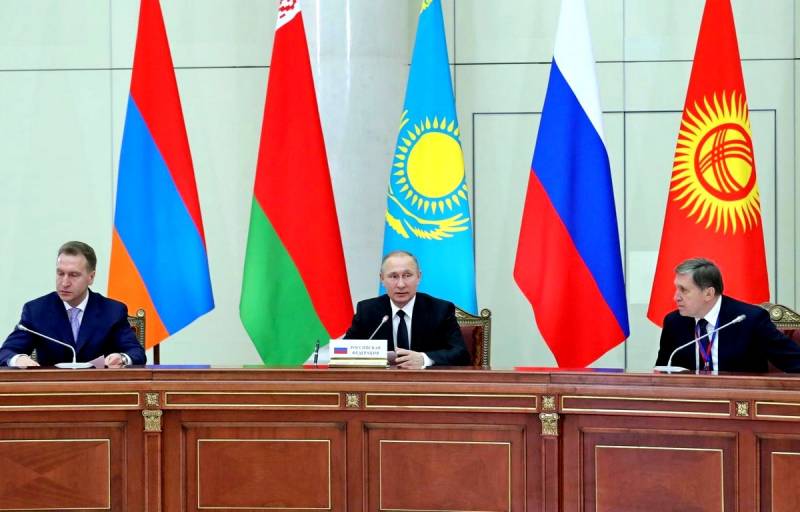 The alarming events of recent times, for the most part unfolding in the very immediate vicinity of the borders of our Motherland and directly affecting its vital interests, have not only revealed a huge number of problems and acute moments that have accumulated in our relations with our own neighbors. By and large, they finally proved the complete inconsistency of such a familiar and firmly rooted in political science concept as "post-Soviet space".


Why is such a formulation, which has been criticized for a long time in the West, is in fact unprofitable and harmful just for Russia? What are the reasons that induce us to abandon it and what can and should be offered in return? Let's try to sort out these difficult questions.

"They do not pour new wine into old wineskins ..."

This evangelical expression perfectly matches the situation that eventually developed on a colossal territory that remained in a completely incomprehensible geopolitical status after the collapse of a great country that covered one-sixth of the earth. Initially, all the independent states that arose on its ruins were only former "fraternal republics", but not much time has passed - and only a part of them remained for each other not only allies, but at least good neighbors. A much larger number of yesterday's "brothers in the USSR" have turned into opponents, if not even deadly, irreconcilable enemies. The war thundering today in Nagorno-Karabakh is the best confirmation of this. Could Russia have prevented all this? Let's be objective - in no way. And not only due to the fact that its first leader, Boris Yeltsin, was absolutely alien to any ideas of a unifying sense, on the contrary, he acted as one of the most active and active destroyers of the USSR.

There are much more weighty reasons - firstly, the West, which did not just "orchestrate" the destructive processes on the territory of the Soviet Union both during its collapse and after it, would not have allowed anything of the kind, going to all the military intervention, which would then hardly have met with a serious rebuff. Secondly, Russia, torn apart by numerous crises, robbed and destroyed in front of its people, was definitely not up to the restoration of its own dominant status in one form or another. Thank God, at least they managed to defend their own territorial integrity - and that at the cost of considerable blood. Subsequently, when attempts were made to “stitch together” the broken ties and disintegrated alliances, they, alas, were reduced to such a level that sometimes it seems that it would be better if they did not exist at all!

In fact, all the interstate structures of the “post-Soviet space” were, to a greater or lesser extent, bad copies of the USSR, created hastily and without much intelligence, adjusted for the new status of the former republics. The only problem was that, unlike Soviet times, Russia no longer had any influence on its old-new "allies" and "partners". From the word "absolutely" ... Let's be honest to the end. It is time, finally, to recognize - that the Commonwealth of Independent States, that the Collective Security Treaty Organization, that the Eurasian economic union are, if not initially stillborn, then, to put it mildly, extremely ineffective formations as they exist, not replenishing with new members, but crumbling literally before our eyes. This alone speaks volumes. Perhaps the reason is that their origins were, for the most part, truly "post-Soviet" leaders of nation states, who as a general strategy chose to satisfy their own urgent needs and far-reaching ambitions at the expense of Moscow.

They demanded trade preferences, cheap energy resources and weapons, protection and support from the "elder brother", while initially not intending to give up even a tiny bit of illusory "independence", but in reality - the right of newly-made "appanage princelings" to exploit the resources of their country and the remnants of what was inherited from the USSR industry and infrastructure at its sole discretion. And at the same time, it is also to play "multi-vector", that is, to participate in full swing in various projects of the West, each of which was essentially anti-Russian from the start. Subsequently, the same “multi-vector approach” was turned by “national leaders” into an excellent lever for blackmailing Russia in the style: “You are evil, evil ... We will leave you”. In the end, they left - often no longer of their own free will, like Viktor Yanukovych, who played into "European integration", and with his rushes brought the situation to a coup d'etat. And what is the result?

New space. But which one?

In reality, no such "post-Soviet space" has existed for a long time. There is the Baltic region, which is a member of the European Union and NATO, which is oozing with Russophobia and is turning before our very eyes into a military foothold for the West to attack our country. There are Georgia and Ukraine, extremely hostile to Russia, which are under the direct external control of the United States. Azerbaijan, which a little more - and can be considered a full-fledged Turkish province. There is Central Asia, where China's influence already far outweighs Russia's. What remains? Armenia, thanks to which we are about to be drawn into an armed conflict with Turkey? Belarus, whose leader is precisely his own, whether it is wrong, “multi-vector” and flirting with anti-Russian forces both in the country itself and abroad, brought the matter to the current attempt at a “color revolution”? True, he must be given her due, he resists quite courageously, coming to his senses and again rushing to Moscow with his arms. Who's next? Moldova with its eternal "rocking" between Moscow and Bucharest?

All this is no longer a "post-Soviet space", at least in something united and at least somehow connected, but a real seething cauldron, which must be put in order from completely different positions and with a completely different ideology, rather than referring to some A common past. No, Russia in no way should renounce its own succession to the Soviet Union. Should not cross out, and, moreover, let someone try to cross out the most important pages of the history of the USSR, such as the Great Patriotic War. However, it is time to admit that at the current stage, relations with the new countries that surround us should be built on completely new principles and principles.

It's time to bury the "post-Soviet space" with a bitter sigh, leaving this term only to historians. Alas, if it existed from the beginning, then we surrendered it to the West almost completely, allowing "Maidans" of varying degrees of Russophobia in almost all the former republics of the USSR. Even with regard to countries that are nominally today, if not friendly, then at least not hostile to us, any assumptions should be made with great caution. Will Belarusians, Kazakhs, and Tajiks stand shoulder to shoulder with Russian soldiers if in the Caucasus they still have to directly clash with the Turks? Will other CSTO members, besides Russia (I’m not talking about the Kyrgyz - they would have to deal with their endless “Maidans”), participate, if necessary, in restoring constitutional order in Minsk? The worst part is that the answer here is rather negative than even hypothetically positive. The Nagorno-Karabakh conflict, in which two former Soviet republics clashed, one of which is openly supported by a NATO member state, in itself puts an end to all "post-Soviet" mirages. But it also makes us think about what exactly the space around Russia should become, proceeding from its, and not the West's, geopolitical interests.

It is very likely that all the structures created on it over the past decades with the participation of Moscow should be, if not scrapped, then at least seriously reformatted. It is necessary to “breathe” life into them, to fill them with real meaning - economic, military-strategic, geopolitical. If both Baku and Yerevan are, as Vladimir Putin says, “our equal close partners,” then hostilities between them should stop at Moscow’s word, and not at a shout from Washington, as it seems to be happening now. Otherwise, all our "alliances" and agreements are worthless.

The cornerstone should be not nostalgia for the common Soviet past, but reinforced concrete pragmatism dictated by current realities. But here you should start with the development of your own country - only after turning into a state, it will be much more profitable to be friends with which (first of all, in purely mercantile aspects) than to be at enmity, Russia will be able to build around itself not a post-Soviet, but its own geopolitical space. The Russian Empire, which collapsed in 1917, was practically fully recreated, no matter who tried to lie, not with bayonets, but due to the fact that the growing and rapidly developing Soviet Union was attractive to the bulk of the inhabitants of the republics that were part of it, full of those who have tasted the bitter and bloody fruits of "independence". This is a historical truth, and it is necessary to draw very specific lessons from it.

Another point is that Moscow must finally openly declare adjacent territories that were once part of the same state with it as the sphere of its own indisputable vital interests, and learn to act in this area without looking back to the West. In principle, this is exactly what is happening in Belarus now - and this gives rise to some hope that our country is starting a “turn” in the only right direction. The world today is not just on the verge of another "great redistribution" - it is in the process of doing so. If at this stage we are not able to create for ourselves at least a safe, more or less predictable, and, ideally, also contributing to the development and strengthening of our country, then in the very near future we will be completely "wedged" between the spheres of influence of China , The United States, the European Union, Turkey, and God knows who else. And this will be a very big step towards ensuring that Russia itself turns from a sovereign state into a territory controlled by someone.
Reporterin Yandex News
Reporterin Yandex Zen
16 comments
Information
Dear reader, to leave comments on the publication, you must sign in.