Iran continues pulling military equipment to the border with Azerbaijan 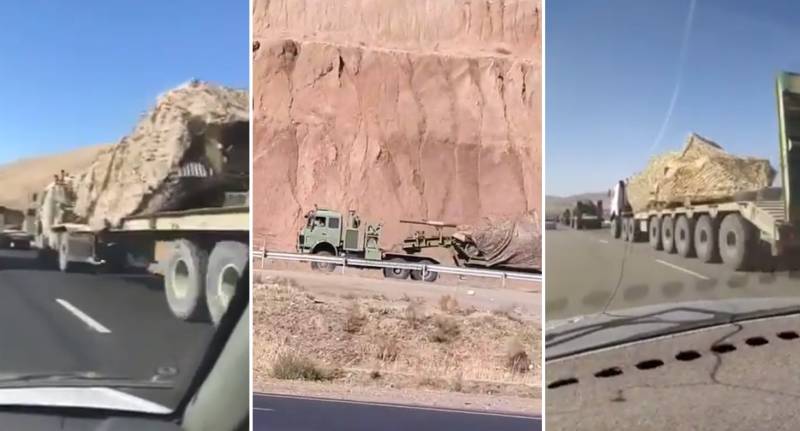 Residents of Iran continue to publish on the Web endless columns of military equipment, which are heading towards the border with Azerbaijan and Armenia. The concern of the Iranian authorities is understandable, because in the immediate vicinity of their country for almost a month there has been a real war for Nagorno-Karabakh between Baku and Yerevan, and “lost” drones and ammunition periodically fly into Iran.


It should be noted that Tehran is extremely worried about what is happening, since it has excellent relations with Yerevan, and the entire north-west of Iran is densely populated by ethnic Azerbaijanis who sympathize with Baku. Before that Iran threw about 200 tanks in the territory adjacent to the conflict zone, which allowed some experts to assume that Tehran is ready to intervene in the conflict.


However, such a development of events is unlikely, since the Iranian authorities fear destabilization and themselves call on Moscow and Ankara to hold a "second Astana summit" by holding talks on the settlement of the Nagorno-Karabakh problem in the Russia-Turkey-Iran format, as was done previously on Syria.


However, Tehran did not want to abandon the project of an important facility and turned to Baku for permission. Azerbaijan refused to discuss the construction of a hydroelectric power station until the territorial dispute is resolved. As a result, Iran began to implement the project unilaterally, trying not to even mention in the media that such a construction site actually exists. In the spring of 2010, the reservoir was filled. Probably at the same time the hydroelectric power station began to work. There is an ancient Khudaferin bridge, an architectural monument. And now Tehran will have to resolve permissive issues with Baku.
Reporterin Yandex News
Reporterin Yandex Zen
3 comments
Information
Dear reader, to leave comments on the publication, you must sign in.