An attempt to cheat: there will be no "nuclear disarmament" in the American way 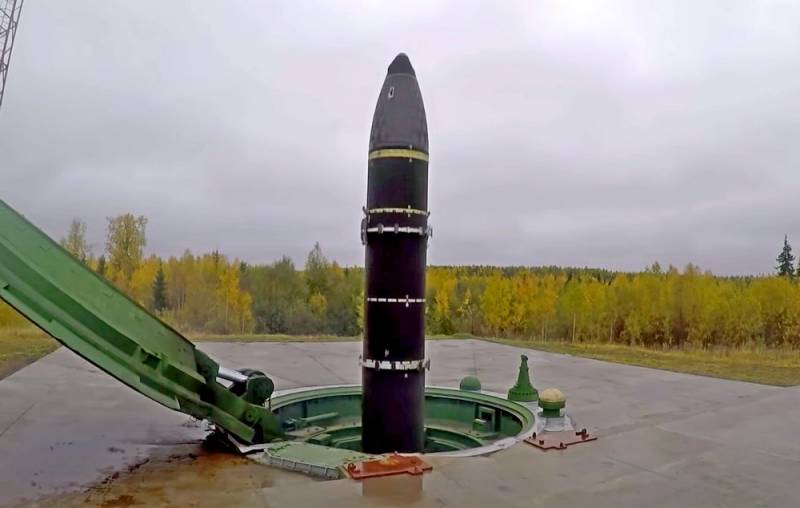 Washington, with an air of offended innocence, rejected the latest more or less realistic proposals to extend the Strategic Arms Reduction Treaty, made by Russian President Vladimir Putin, calling them "failed." In principle, this can be a bullet point in the negotiations ... On the other hand, it was not worth counting on anything else from the very beginning - the election stories about "very good deals", broadcast to the public are not so much decisive in the United States, which he seems to rule Donald Trump is one thing. And the true intentions of the true masters of the United States are completely different.


Moreover, as paradoxical as it may sound, such a development of events is not at all the worst option for Russia. Much more unpleasant and dangerous consequences could have come, had Moscow been led by the American side with its "gentlemanly" proposals, worthy only of the bazaar "scammers". Fortunately, this time, the Kremlin did not "bow down" to the West to the detriment of the vital interests of their own country. Let's try to figure out why such a decision was made there and why it should be considered the only correct one.

How the Americans tried to deceive Russia

But how beautiful everything seemed to turn out - just the other day, on October 13, the White House special envoy for arms control Marshall Billingsley proclaimed with a very solemn and serious air that a "principled gentleman's agreement" had been reached between our countries. That is, the case, practically, "on the ointment" and the autographs of the two presidents are about to (according to Billingsley - "tomorrow") will appear under the version of the treaty, which the United States, with persistence worthy of better application, tried to slip Russia. It wasn't like that. The harsh domestic Foreign Ministry was quick to turn a real tub of cold water on the American chatterbox who had spoken. Its deputy head Sergei Ryabkov openly stated that Washington's position on the nuclear deal is categorically "unacceptable" for Moscow and that Washington "will not receive" a signed (even more so - before the elections) treaty with onerous terms invented by its representatives.

What, in fact, are we talking about in this case? What is it about the American version, which Moscow flatly refuses to even discuss? First of all, the American “smart people”, proposing to extend the agreement for just a year, intended to “fasten” to it such a lot of changes and additional “options” that are definitely negative for us, which, in fact, in their sum, outweigh all possible "Pluses" from the agreement. For example - the United States demanded to simply "freeze nuclear arsenals." That is, instead of a specific list of weapons with clearly defined control mechanisms, we are ordered to "pause" all serious defense programs. If not completely abandon them.

It is clear that Washington's greatest irritation and fear is caused by the latest models of Russian weapons, such as Avangard, Sarmat, Poseidon. Billingsley called promising nuclear-powered missiles "flying Chernobyls" after which he absolutely categorically demanded that work on their creation be stopped. According to the head of Russian diplomacy Sergei Lavrov, at some stage of the negotiations our country was ready to make serious concessions - to include two of the five promising weapon systems in the list of subject to restrictions. This turned out to be not enough - the Americans demanded to impose a taboo on everything that was conceivable and inconceivable, and even to expand the effect of restrictions not only on strategic warheads and their carriers, but also on tactical ones. But how do you control all this? There was no clear answer to this question, which is of fundamental importance. This position unequivocally testifies to the fact that a primitive cheating has probably started in Washington.

There is every reason to believe that by proposing "ban everything", but only for one year, the United States initially does not intend to adhere to its own obligations under this agreement. Somehow, all their "expanded peace initiatives" do not fit with the talks of the same Trump about the creation of "nuclear systems that neither Putin nor Xi Jinping have any idea about." The United States is reportedly working at a frantic pace on eight, if not a dozen programs in this area, demanding that we curtail the development of hypersonic vehicles. And not only in this ... They simply need time to then put a larger caliber pistol to our temples, securing impunity for themselves!

Peace treaty to prepare for war

The thesis circulated by some domestic unscrupulous commentators that “the United States wants to launch a new large-scale arms race in order to undermine the economy Russia, as it was done with the USSR ”, is absolutely untenable. If only due to the fact that the national economy of the Soviet Union was destroyed not in any way by defense costs and not by the fall in oil prices, but by the criminal actions of its leaders, who turned out to be traitors to the Motherland. By the way, the assertions that "the weak Russian economy will not stand up to a military" competition "with a prosperous American one" come from Washington. And they are, again, a real lie. First, our affairs are not nearly as bad as the overseas "well-wishers" would like, and secondly, their situation is not at all as good as they are trying to imagine. A budget deficit of an absolutely record 3.1 trillion dollars (more than 15% of GDP), a public debt of almost 150% of GDP - all this somehow does not look very much like "prosperity." Military spending is devouring more and more exorbitant sums, and, what is most offensive, without achieving certain "breakthrough" results, which are so dreamed of in the Pentagon and the White House.

Perhaps the best proof of this is the recently published report of the Congressional Research Service on one of the "favorite brainchilds" of the American military-industrial complex - the Aegis missile defense program. Conceived as a system to protect the warships of the local naval forces from missile and bomb attacks and which turned out to be a really successful system, the Americans decided to "upgrade" to the level of a shield against intercontinental ballistic missiles. The funds invested in this project are simply colossal, but what is the output?

The Research Service report cites extremely intriguing numbers: for the implementation of the Aegis BMD program in the next fiscal year 2021, it is planned to allocate about $ 1.8 billion from the "bins" of the US Missile Defense Agency (MDA) alone. Plus to that - appropriations from the naval department. Also between the military and politicians lively discussions are underway regarding the need to create an Aegis Ashore missile defense system in Guam and repurpose the test site in Hawaii as such. Today, the backbone of the Aegis system consists of equipped warships, which carry out patrols around the world - from European waters to the Persian Gulf and the Pacific Ocean. Their number is also planned to increase sharply - from 48 at the end of the 2021 fiscal year to 65 at the end of the 2025 fiscal year. At the same time, the same document cites very negative statements regarding the effectiveness of Aegis of high-ranking officials of the American Navy, for example, the chief of naval operations, Admiral John Richardson, who this summer said that the navy should be "spared from tasks related to the competence of missile defense." because they "consume excessive amounts of resources and reduce combat readiness."

The skepticism of admirals is fully explained by the table of the effectiveness of test launches of the Aegis BMD interceptor missile system published in the same report (those who wish, by the way, can read it on the website of the US Congress and in some American media - free access). The overall effectiveness of hitting training targets in about 80% sharply decreases as soon as it comes to targets imitating intercontinental ballistic missiles, especially with a multiple warhead. Here - no more than 60% of interceptions. There can be no talk at all about countering hypersonic missiles. Well, who needs such a "leaky" shield in a situation where penetration of one enemy warhead through it is enough to kill millions?

This is where Washington's desire to hastily replace the real system of deterring nuclear weapons with some kind of incomprehensible "ceasefire for a year" originates, during which time they obviously expect to "solve problems" with the same missile defense system and significantly increase their own strike potential. First of all, at the expense of the latest delivery systems, the development and implementation of which, in accordance with the cheating treaty, they want to ban Russia. The conclusion of such agreements, designed to "snatch" at least some time, vital for the country for accelerated preparation for war, rearmament and mobilization, have been normal practice at all times. However, it is worth considering one important detail - they signed only in those cases when the leaders of states considered a future war to be completely inevitable and therefore were ready to postpone its start at any cost, so that later they would surely defeat the enemy. I think there is no need to explain what this motivation is for the leadership of the United States. The overt militaristic preparations of this country and its NATO allies against Russia testify for themselves.

The proposals of Vladimir Putin, who came up with the initiative to renegotiate START-3 in its normal form without any unacceptable for Russia "additions" and "amendments" - even if not for the prescribed 5 years, but at least a year, according to the Ambassador of our country to the United States Anatoly Antonov was rejected there, as they say, "from the doorway" - even without any discussion and analysis. The US President's National Security Advisor Robert O'Brien said that this approach of Moscow is "doomed to failure" and the negotiations are expected to "fail." Maybe a failure ... Maybe a failure ... But in this case, it is not Russian foreign policy, but the next efforts of the United States to bring our country to its knees, putting forward humiliating ultimatums, the implementation of which could turn into an exclusively global geopolitical defeat.
Ctrl Enter
Noticed oshЫbku Highlight text and press. Ctrl + Enter
We are
"We must beat first": the geopolitical alignment around Russia is continuously deteriorating
Ten "defeats" of Putin
Reporterin Yandex News
Read Reporterin Google News
5 comments
Information
Dear reader, to leave comments on the publication, you must sign in.