Tikhanovskaya's Ultimatum: Agony of the Opposition or the Start of a New Escalation? 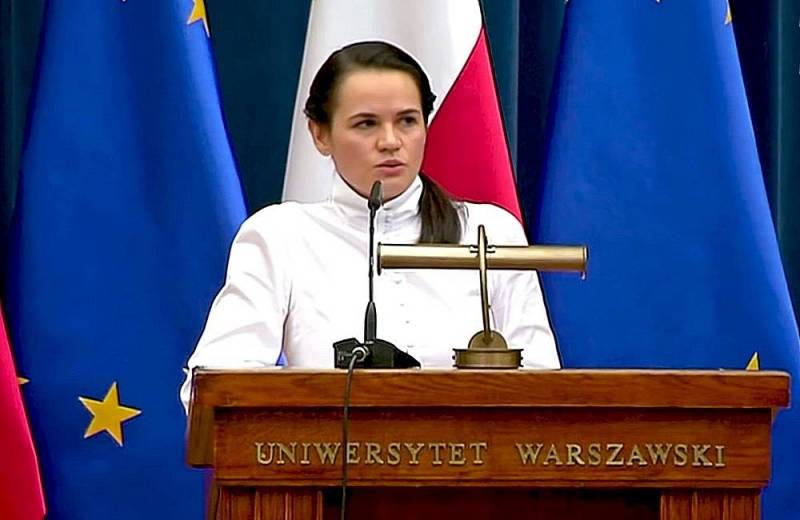 After Svetlana Tikhanovskaya, the self-styled "presidential" of Belarus, who was sitting in Lithuania, presented the legitimate head of state Alexander Lukashenko with the "last and decisive" ultimatum with a deadline of October 25, some hurried to declare: this is, they say, a manifestation of powerlessness and an attempt to "round off nicely" the apparently unsuccessful coup attempt.


Don't jump to conclusions. Moreover, both with regard to what the demarche of the Belarusian “oppositionists” means, and in assessing the prospects for further developments in the country. They are definitely about to enter a new phase. But which one? Let's try to figure it out.

Requirements that cannot be met

At first glance, things are going nowhere worse for the gang called the Coordination Council, which has proclaimed itself almost the interim government of Belarus. Exactly according to the well-known formulation: "some are no longer there, and those are far away." "No" in this case means - at large. Lukashenka and the local “siloviks” who executed his orders with all the discipline required, for the most part “packed up” and sent to the bunks the absolute majority of the leaders of the would-be putschists, who were not quick enough to emigrate, who tried to ignite the “Maidan” in the country on the Ukrainian model. In any case, as far as we know, on October 13, the last of the seven members of the presidium of this sharashkin office, Sergei Dylevsky, a former employee of the Minsk Tractor Plant, who suddenly turned into a "revolutionist", quietly disappeared into Poland. At first, he led the strike at his own enterprise, and then he "took off" right up to the level of a member of the presidium of a gang of impostors, believing, obviously, that he had made a brilliant political career. By the way, they had poured him out of the factory for a week, but now they had to leave the country.

Quite, by the way, it is interesting, where does the “simple hard worker”, whom Dylewski is trying to position himself with, have the funds to move with his family to Warsaw? However, God bless them, some to Lithuania, some to Poland, and some even to Ukraine “protest leaders”. The question here is not in themselves, but first of all, in the motives of their general drap. It is clear that the first thing that comes to mind: "the rats leave the sinking ship." The end is "fun", but you will have to answer differently ... However, what if not everything is so simple? It is quite possible that these rodents do not give a streak of their own free will - they are evacuated in advance by those to whose tune they dance, starting in August. Naturally, with an eye to further use for the same purpose. But why now?

The “ultimatum of Tikhanovskaya” is not only extremely impudent (especially considering the real “achievements” of the protesters), but also deliberately impossible. Or rather, not even so - it was not originally designed to be executed. I'll try to explain. What do those who try to knock him out of their "Lithuanian far" demand from Lukashenka? Resign until October 25th exactly. This is no longer funny, gentlemen, it is simply ridiculous. Even if we make a completely fantastic assumption that Alexander Grigorievich had intentions to go to retirement, then there is no doubt that after another attempt to "bend" him, undertaken by a cheeky woman, he will completely refuse them. Does Tikhanovskaya know about this? Yes, in the most beautiful way. The same applies to claims of "ending violence in the streets" and "immediate release of all political prisoners."

If we cleanse them of verbal husks, then at the exit we have an order addressed to the legal authorities to completely stop resistance to the "Maidan", raise their paws up and go out one by one for subsequent lynching. The appeal of "President Sveta" to the representatives of law enforcement agencies "to make public statements that you do not support the regime" and "to go over to the side of the people" is of the same quality. I could give a couple of quotes about such proposals from personal communication with the local policemen with whom I maintain regular contacts - but I will not, due to the fact that these extremely tired, but not thinking of giving up, people in relation to Tikhanovskaya and her pack are absolutely not choose. However, the best answer here can be considered the official statement of the Deputy Minister of Internal Affairs of Belarus Gennady Kazakevich, who warned those who seek to radicalize events in the country that, if necessary, the law enforcement forces will not stop before using military weapons, and not just special means of non-lethal action.

Who wants to make “partisans” out of Belarusians?

The threats set out in the “Lukashenka’s message” that we are discussing look even more ridiculous. "Going out to the streets of citizens with a" People's Ultimatum "? Well, they are already walking. What's the point? "Total road closure"? Try it, Kazakevich warned you ... However, there is a suspicion that if the local "Maidan" people really think of real attempts to paralyze traffic in Minsk, they will be beaten by the drivers themselves. In this case, the police will not have to disperse them, but save them. "The collapse of sales in state stores"? It's funny, Sveta, it's funny, the spar is on! And, finally, the "main caliber" that the "oppositionists" are counting on is the "national strike". Alas for them, sickness is, most likely, also past. Attempts to organize something similar, undertaken at a time when the protest was only growing and passions were boiling much more abruptly, in fact, failed. Well, yes - in some places they held rallies, tore throats and stopped work (let's be frank - give many people just an excuse for this, they are happy). However, the strike movement did not take on a mass scale. And the point here is not so much about "repression" as in a completely different fact. Such "entertainment" can be too expensive for the Belarusian the economy, and so is now in a far from brilliant state.

According to the available data, Grodno Azot and Belaruskali, whose teams once decided to “play the revolution”, are now suffering huge losses. In total, over the past 7 months, the total earnings of the chemical industry in the country decreased by more than 15.5%, while profits fell 5.5 times. They did it ... The reasons, of course, are not only in rallies instead of work - the industry is already going through hard times due to the global crisis. But following the calls of the "oppositionists", what a good thing, will finally finish it off, like the rest of the country's economy - and more and more Belarusians understand this.

The only thing that remains for those who crossed the Rubicon and embarked on the path of open confrontation with Alexander Lukashenko and the legitimate government is the transfer of protests from their current, relatively peaceful and clearly "exhausted" state, into the most acute phase, not just with violent actions, but with an indispensable bloodshed. The ultimate demonization of the "criminal regime" both in the eyes of the Belarusians themselves and, first of all, in front of the "world community", pushing it to much tougher actions in relation to Minsk and Moscow, which supports Lukashenko. Alas, this is exactly what is happening now. On the streets of Belarusian cities, again, as at the very beginning of the riots, attempts are made to erect barricades, set fire to tires and similar tricks, testifying to persistent attempts to nevertheless realize the Ukrainian scenario. Moreover, there are already, albeit only single, but concrete examples of attacks not only on single law enforcement officers, but also attacks on their bases.

Thus, on October 13, several “Molotov cocktails” were thrown into the courtyard of the Sovetskiy district police department of police, as a result of which a service bus caught fire. There are serious suspicions that this is just a test of strength, and not so much of local radicals as of militants specially trained on the territories of neighboring states (Poland, Lithuania, Ukraine), who were thrown into Belarus for quite specific purposes. Also the other day an event took place that has an even more frightening subtext - some scoundrels (sorry, there can be no other definition here) dragged out to "protest" in the center of Minsk ... disabled people! This is exactly the action according to the training manual of the State Department. Pay attention - lately there have been organized "marches" of "pensioners", then "mothers", trying to provoke law enforcement officers to take tough actions against them. Is there a "development of a picture" for CNN, the announcers of which will then have to explain to the Western inhabitants the vital necessity of another military invasion "to restore democracy"? Very much like that.

The worst thing is that shots at the crowd of "unknown snipers" traditionally occurring in the epicenters of "color revolutions" around the world may well sound during such an event, next to which "by a strange accident" will be correspondents of the leading Western media. And then it will be possible to prove as much as necessary that it was not the police, the military, or the KGB who fired. Ukrainian "Berkut" has already tried to prove ... Do you think that the winners are not judged? The losers are not judged - they are destroyed without trial or investigation ... Next Sunday, the "opposition" is already calling Belarusians to a new action. This time the “Partisan March” was announced. Citizens are urged to “remember about the partisan genes they have” - and go out to “fight”. It is impossible to imagine greater blasphemy and distortion of concepts - entrenched in Lithuania, where former SS soldiers are honored at the state level, a handful of traitors and lackeys of the West offer to "join the partisans" in the name of their own selfish interests to the descendants of those whom these SS men burned whole villages! To organize a civil war in their own country to please the "Western civilizers", whose arrival in 1941 cost Belarus the death of every fourth inhabitant ...

A very alarming "wake-up call" for Minsk is the intention of the European Union to include Alexander Lukashenko personally in its own ridiculous sanctions lists, recently announced by EU High Representative for Foreign and Security Policy Josep Borrell. This indicates that Brussels has lost hope that Alexander Grigorievich, having bargained for a little, will nevertheless surrender the country to his proteges. The West, of course, wanted to get Belarus "safe and sound" - so that there was something to plunder. However, now, having finally made sure that "agreeing in an amicable way" (for him) will not work, he will be ready to "give the go-ahead" for any radical actions of his own hirelings, for the bloodiest vileness - just to get his own. The initially impracticable and provocative "ultimatum of Tikhanovskaya", unambiguously written under the dictation of the "curators" is the best confirmation of this
Ctrl Enter
Noticed oshЫbku Highlight text and press. Ctrl + Enter
We are
"We must beat first": the geopolitical alignment around Russia is continuously deteriorating
Ten "defeats" of Putin
Reporterin Yandex News
Read Reporterin Google News
6 comments
Information
Dear reader, to leave comments on the publication, you must sign in.