Russian Mi-8 had to intimidate Syrian provocateurs in Al-Hasak 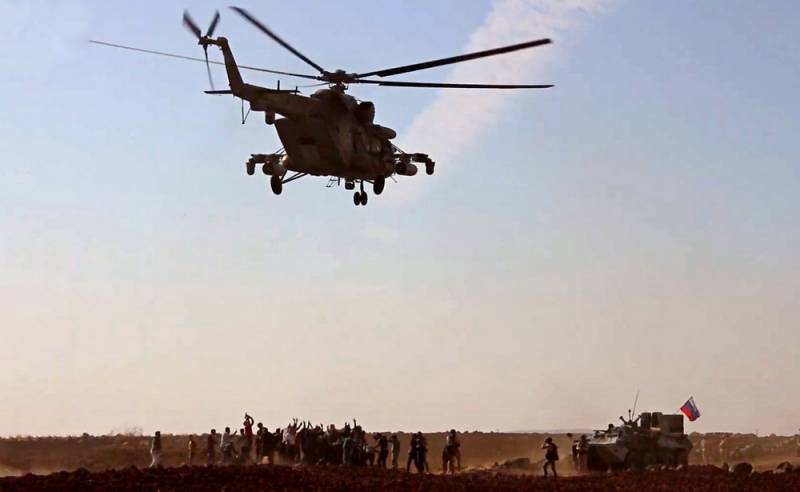 Despite the agreements, Washington began to demonstrate to Moscow a "special partnership" in the SAR. Syrian sources report that Americans are primitively bribing local residents in a war-torn country to interfere with the passage of Russian military patrols that are trying to restore peace in Syria.


For example, on October 11, 2020, residents of the village of Ein Divar, located in the northeast of the country in the province of Al-Haseke (predominantly inhabited by Kurds), blocked the movement of the Russian military in the direction of the city of El-Malikiya (Derik), where recently appeared military base of the Russian Federation. The leaders of the "protesters" were well aware that the Russians, unlike the Turks or the Americans, would not use force, shoot or press. Therefore, they blocked the road with women and children.

Go to your home or go fight Erdogan
They chanted.

The Russians tried to persuade the “protesters” to leave the roadway and let the convoy pass. The military could not just stand still or turn around and go in the opposite direction. The fighters also failed to bypass the rally, since the organizers of the provocation had previously surrounded the roadside with boulders.

Therefore, the resourceful military had to intimidate the Syrian provocateurs with the help of a low-flying Mi-8 helicopter. He hovered over the crowd for a while and helped her "dissolve", clearing the roadway. The noise of the rotorcraft took effect, no one was hurt.


Note that if this area was controlled by the Turkish military, the provocateurs would be afraid to approach the armored vehicles or block the road in response to a cannon shot. Turks are less sensitive in such matters than Russians. As for the Americans, they are trying in such a not very beautiful way to prevent the Russians from gaining a foothold in a new military base that will control the whole region.
Ctrl Enter
Noticed oshЫbku Highlight text and press. Ctrl + Enter
We are
Syrians began to block American military columns
Voice of America: Kurds Separate Russian and US Military in Syria
Reporterin Yandex News
Read Reporterin Google News
Ad
The publication is looking for authors in the news and analytical departments. Requirements for applicants: literacy, responsibility, efficiency, inexhaustible creative energy, experience in copywriting or journalism, the ability to quickly analyze text and check facts, write concisely and interestingly on political and economic topics. The work is paid. Contact: [email protected]
21 comment
Information
Dear reader, to leave comments on the publication, you must sign in.