"Iron Curtain" for Europe: what is behind Lavrov's warning to Brussels 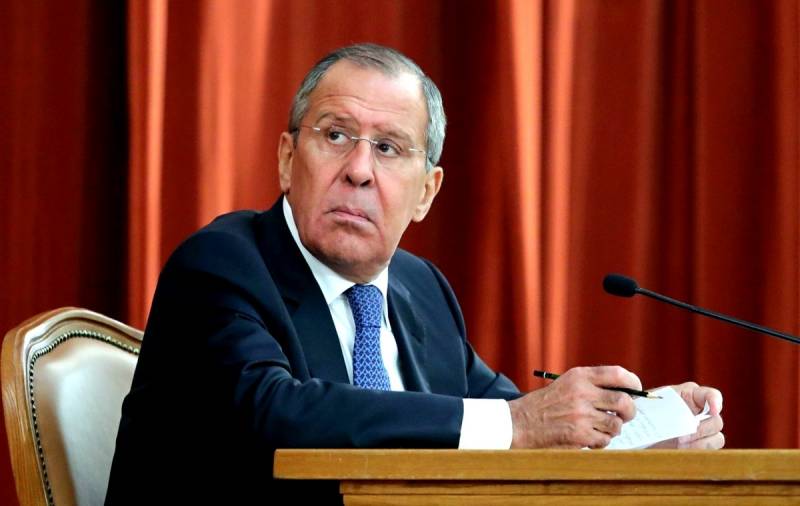 The harsh and categorical statement of the head of Russian diplomacy regarding the possibility of a complete rupture and so leaving much to be desired "dialogue" between Europe and Russia, made by him during the Valdai Discussion Club, may seem to some just another "duty" rhetoric of a high-ranking official. In fact, this is not at all the case. The notorious “iron curtain”, long forgotten, but not at all put into the “dustbin of history”, is already creaking on its guides, preparing to collapse again between us and the West.


There are very specific reasons and grounds for the fact that this geopolitical "mechanism", created and put into action in the distant years of the Cold War, can be put into action right now. They should be looked for not only, but perhaps not so much in the "clean" policy, how many in the economy... Let's try to figure out what exactly we are talking about.

There are no allies ... Enemies - as many as you like

Let's start with politics. In all honesty, all the activities of our country in the field of establishing normal, good-neighborly and partner relations with the Western world in general and with Europe in particular, can be characterized by one short and extremely specific word - "failure". Especially when it comes to recent years. However, Russia was acceptable to the local "establishment" only in those periods of time when it was ready to endure all attacks, teachings and other "educational measures" in relation to itself, weak-willed and resignedly. Bowing my head obediently, I listened to endless nagging and reproaches - in the lack of "democracy" and "tolerance", in the unwillingness, without reasoning and without hesitation, to fulfill another whim and instructions of the "highly developed" and "civilized", in the hope of another handout, or at least for her promise. Either we, you know, are insensitive to perverts, now we do not protect our "oppositionists" more than the apple of our eye, then something else in the same spirit ...

And even after 2014, after the reunification of Crimea with Russia and other accompanying events that testified to Moscow's categorical reluctance to give up Donbass to be torn apart by the nationalist Bandera gang, Europe finally “came to its senses”: “They are aggressive, uncontrollable and with“ imperial manners ”! This is translated into normal human language in such a way that our country dared to show its readiness and ability to defend its own vital interests. If necessary, then by force. It was with this that the sanctions began, the expulsion from all kinds of "authoritative international organizations" and similar things, which continue and, moreover, are intensifying to this day. When will it end? Never! Russia does not have any “friends” and “allies” in Europe, and cannot be there by definition.

Let's be realistic and remember at least how many of the countries of the current EU participated in the Great Patriotic War on the side of the Third Reich, or, at least, supported it indirectly, indirectly. Almost everything. Well, tell me, what kind of “friends” can we be from France or Germany, unable to cope with their own problems, but periodically striving to “form a new world order” (this, by the way, is not a quote from Mein Kampf, but from a fresh issue of German Die Welt - nothing changes) ?! Of the Italians, in response to the assistance rendered to them by Russia in the most difficult period of the pandemic, who began to throw mud at our country? However, let us leave alone the "conquerors" we have beaten and their direct allies. Take, for example, other countries - those that our country saved, supported, with which the notorious "Slavic brotherhood" or common faith seems to bind us ... An expression so consonant with the name of military exercises, in which the "brotherly" Serbia recently flatly refused to participate , I did not mention it by chance. As soon as the European Union not only stamped its foot, but loudly shouted - and Belgrade obediently sat down on its hind legs, spitting on its "brothers" and its own obligations. It is touching that the local media subsequently tried to find an excuse for the cowardice and opportunism of their own authorities - the maneuvers, they say, "were not counter-terrorist", as it was initially stated, so we are in the bushes ...

Who else are our potential "best friends"? Greeks? Only the local Prime Minister Kyriakos Mitsotakis had a very fruitful meeting with US Secretary of State Mike Pompeo in Crete at the end of last month. The main topic for discussion is “joint opposition to Russian challenges in Europe”. First of all - "opposition to attempts to influence the Orthodox Church" that our country is allegedly undertaking. It's dashing, isn't it - "to defend Orthodoxy" from Russians in the company of Americans? There is, however, an even more striking example. Yes, yes, Bulgaria. Our "brothers" are priceless. Here we will begin our conversation regarding several other aspects of the topic under discussion.

Europe without gas? Well, why do we need it ?!

What the country has been doing in recent years, the very existence of which on the map has been paid for more with Russian than Bulgarian blood, and for which at one time the ultimate dream was to become part of the USSR, is difficult to describe. In any case, in decent terms. Just the other day, the head of the General Staff of the Bulgarian Army, Admiral Emil Eftimov, enthusiastically announced the conclusion of an agreement with the Pentagon on the permanent deployment of 2 and a half to 5 thousand American troops in the country. The promised F-16 fighters from the United States, which are to replace the Russian MiGs, are expected in Sofia - they will not wait. Well, they chose for themselves the "enviable" fate of another colony and military base in Washington - their choice. But why, at the same time, commit meanness that inflicts direct economic damage on Russia?

In a recently published official memorandum, RAO Gazprom directly accuses Bulgaria of disrupting all conceivable and inconceivable terms for the construction of its section of the Turkish Stream gas pipeline. Its construction is being delayed for at least six months against the expected - back in February of this year, the Bulgarian side swore that it would complete all the work, the main one of which is the launch of the gas transmission system on the border with Serbia, already in the first half of the year. Now they vaguely promise something about the "end of 2020", but there is less and less faith in these promises. First of all, due to the fact that she was intensively “powdering the brains” of Moscow, Sofia all this time looked in a completely different direction. Which one? Yes, in the direction of the almost complete (and without any delays, mind you!) Trans-Adriatic Gas Pipeline (TAP), which is a direct and very serious competitor to our Turkish Stream.

As far as we know today, the gas has already reached the receiving terminal in the south of Italy (in any case, this is what the press service of the TAP AG consortium claims) and the matter remains small. A number of not too serious formalities, and the gas pipeline will start working in full force. It is expected that up to 9-10 billion cubic meters of "blue fuel" will be supplied to Europe annually. A billion of them will be divided between Greece and Bulgaria. Here is the reason for Sophia's amazing "sluggishness". There is a strong suspicion that the true roots of all kinds of delays in the construction of Nord Stream 2 should also be sought here. In the opinion of the absolute majority of experts, in the energy sector, the European Union deliberately put obstacles to it, waiting for the "alternative option" in the form of TAP with its supplies of Azerbaijani gas to become a reality, in order to begin to twist the arms of Russia with might and main, demanding from it unseen and unheard-of energy discounts.

The Old World decided to leave both Moscow with its "streams" and Washington with its LNG in the fool. Having thus achieved the coveted "diversification", they firmly intend to get hold of gas at the most bargain prices and purchase it at such prices in the future. Add to this the EU's serious aspirations for "carbon neutrality" and the rejection of fossil fuels, and the final picture will be rather sad. Having contacted (once again) on its own head with the Turks and Bulgarians, Russia apparently miscalculated, having “buried” in the Turkish Stream alone, according to available data, at least $ 7 billion. It seems that in the very near future Europe will really not really need our gas. But in this case, the question arises: Why then do we need Europe ?!

No, really, it was still possible, reluctantly, to endure her mentoring tone and arrogant attitude, while counting in my mind the colossal sums that poured into the national budget from the sale of huge volumes of energy resources to the West. Now these amounts have decreased to extremely unpleasant proportions - but the West's desire to show us how to live has not only not gone anywhere, but has grown significantly stronger! The European Union, at the level of its official structures, openly, stubbornly and impudently climbs into the affairs of Belarus. But this, let me remind you, is not only a sovereign country, but also a part of the Union State. This is an interference in our internal affairs and an encroachment on our vital interests.

There is nothing to say about the story of the "poisoning of Navalny", the behavior of the EU and its individual members in which the same Lavrov called "unacceptable and inappropriate". From what is happening it becomes extremely clear - they will not leave us behind. This "music" will be eternal - we will constantly "poison" someone, both not in Salisbury, so in our native land. And the West, demanding from us to "repent" and "bear responsibility", meanwhile, will try to arrange "color revolutions" and armed conflicts both on our borders and over time (be sure) already on Russian territory. So is it not high time for this most notorious "window to Europe" and, in fact, if not boarded up tightly, then at least close it up more tightly? Even “for a while,” as the head of the Russian Foreign Ministry said.

To put up with the absurd neighbors and the squabbles they periodically arrange for the sake of "higher state interests", expressed by concrete super-profits - this is still understandable. But to continue listening to all the same claims completely without any benefit to oneself is simply ridiculous. Moreover, in the future, we will have to deal with more and more insolent antics and more and more daring and dangerous attempts to "punish" us. It is very likely that everything is going to the fact that the tone in Europe will soon be set not even by Berlin or Paris, but by such American satellites as Warsaw, which is already giving Moscow a considerable headache and clearly does not know restraint in its ambitions and appetites. It seems that the West is once again eager to "put us in place" and "tame" us. It's time to put up a more reliable barrier for such inclinations.
Reporterin Yandex News
Reporterin Yandex Zen
11 comments
Information
Dear reader, to leave comments on the publication, you must sign in.