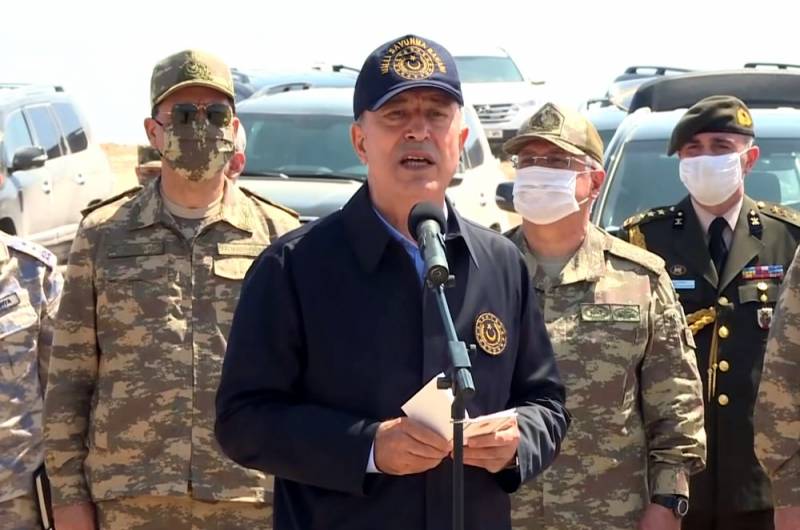 On October 12, 2020, Turkish National Defense Minister Hulusi Akar and Russian Defense Minister Sergei Shoigu had a telephone conversation. During the conversation, Akar reminded Shoigu about Syria and Libya in the context of the events in Nagorno-Karabakh, the Turkish Anadolu agency writes.


Akar accused Yerevan of violating the ceasefire. An agreement on it was reached recently in Moscow, but it did not last even for several days. He in a harsh manner demanded the immediate withdrawal of Armenian troops from the occupied region.

Armenia must immediately withdraw its troops from the territory of Azerbaijan. Baku cannot wait for justice for another 30 years
- said Akar.

The Turkish minister stressed that Ankara is ready to support the fair position of the Azerbaijani side.

The leaders of the military departments also touched upon the topic of Libya, where, after the intervention of the Turkish Armed Forces, they managed to push the LNA of Field Marshal Khalifa Haftar from Tripoli. Moreover, Moscow has been supporting the LNA since 2016 by supplying weapons and mercenaries. However, Haftar had to retreat and the UN-recognized PNS regained access to the oil fields.

The ministers also spoke about Syria, where, after the intervention of the Turkish Armed Forces, the forces of Bashar al-Assad and the Russian Aerospace Forces were forced to stop the offensive on Idlib.

Turkey takes steps to ensure the safe return of internally displaced persons to their homes in the Idlib de-escalation zone
- explained Akar.

Note that on October 11, Baku and Yerevan reported mutual shelling, as well as the death of civilians and military personnel. Azerbaijan informed about the application by the Armenian military rocket strike in the city of Ganja, as a result of which about 10 people died. At the same time, the Armenian side pointed to the continuous shelling of the civilian infrastructure of Nagorno-Karabakh by the Azerbaijani army.

At the same time, the Russian community of Nagorno-Karabakh appealed to Russian President Vladimir Putin with a request to urgently stop the bloodshed, in which militants from various Islamist organizations have already actively joined.

We have something to fear. The massacre of 20 thousand Armenians in Shushi in March 1920, Sumgait in 1988, then Baku, Kirovabad, Maraga and other tragedies, together with the Armenians, we have already experienced, because the Russians were then also driven out and killed
- explained the head of the community Galina Somova.

Some Russian experts suggestthat Azerbaijan will not stop at Nagorno-Karabakh and will try to "cut a corridor in the mountains" through Armenia, establishing a land connection with the Nakhichevan region. To do this, the Azerbaijani army will have to push back the Russian border guards who are guarding the Armenian-Iranian border.
Reporterin Yandex News
Reporterin Yandex Zen
6 comments
Information
Dear reader, to leave comments on the publication, you must sign in.