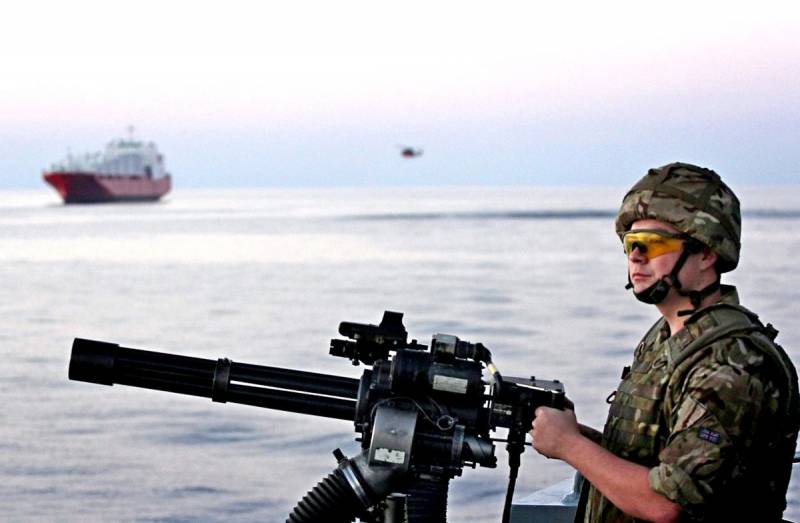 The visit of Ukrainian President Volodymyr Zelenskyy to the UK last week is presented by the local pro-government media as a kind of "breakthrough", another "peremogue" and a new step on the way to the longed-for rapprochement with the West. In fact, judging by the officially announced results of this trip and the latest events in the field of Ukrainian-British relations, it is worth talking about something completely different.


Transformed from the moment of the "Maidan" coup into a territory fully controlled and controlled to a lesser extent by the European Union and to a much larger one - by the United States, the "non-leveraged", apparently, decided to find new owners. What is it fraught with and why is it high time for Moscow to start worrying about this? Let's figure it out.

From the world to the trough - Ukraine Navy?

I will not go into particularly subtle details about how petty and ridiculous fraud is Zelensky's attempts to present his agreements with London as some kind of unprecedented achievements in the field of foreign economic activity, but I will mention something. Free Trade Zone Agreement? So Britain is now signing similar agreements, as they say, to the right and to the left - after all, after its exit from the European Union, a legal "vacuum" arose in this matter. The EU regulatory framework no longer applies to it, so you have to attend to your own. Within the framework of this agreement, the "nezalezhnaya" will be able to supply duty-free to Foggy Albion some other fraction of its own agricultural products, such as corn or sunflower. Also, its market will become even more open to English goods. According to rumors, the local whiskey producers are already rubbing their hands in anticipation ...

Obviously, the sirs do not know that about 90% of Ukrainians today do not have money even for a normal "official" vodka and are forced to be content with "whiskey" from local beetroots exclusively handicraft production. During the years when Britain was a member of the EU, the volume of its trade with Ukraine was almost scanty - in any case, “non-sales” products were purchased there in a volume four times less than, for example, Germany or Italy. Investments, about which Zelensky is trying to weave something, clearly not friendly even with the basics economic diploma, too, will not. The maximum is credits. What and under what conditions? An exhaustive answer is given by the essence of the deal, which the Ukrainian presidential office is trying to present as the greatest achievement, and not only in the field of "reviving the domestic industry", but also in the military-strategic aspect.

We are talking about a memorandum, according to which Britain intends to provide Ukraine with 1.25 billion pounds "for the development of the Navy." Zelensky, according to the old clown habit, broadcasted in general with a breath and almost with tears in his eyes: “We all believed that Ukraine would have a navy again! And now ... "At this very moment I want to shout:" Stop, stop, stop! But from here - in more detail, please. " Is the nazalezhnoy navy to appear just now, thanks to the sirs from London? But what about the "invincible flock", whether mosquito, or wolf, which was forged at the factories of Petro Poroshenko and into which a lot of state money was loaded? How about Island patrol boats from, scary to say, the USA itself?

I would like to say "little-worn", but it will not be true - these pellets dangled off the American coast until the Yankees themselves brought them to Odessa, obviously wanting to get rid of the decommissioned scrap metal as soon as possible. However, after all, “on the way” (the US State Department has already approved their sale, the matter is small - for the money!), It seems, there are also 16 Mark VI boats, which should cost Kiev “only” 600 million dollars? Well, of course - this "sea power" is also not enough. The outlined contract with the British is even more enchanting - the funds received from them in the form of a loan (of course, at good interest!) Will be used, first of all, by British shipbuilders and representatives of other branches of the local military-industrial complex. On the Nikolaev "Nibulon" some of these boats, perhaps (not yet exactly), will only be assembled. Thus London will profit twice - both from the provision of a loan and from the injection of the same money into its own industry. Bravo, sir!

This deal (as, incidentally, any agreement that the natives-mugs have the imprudence to conclude with the British Sahibs) also has hidden sides that, perhaps, outweigh even a purely mercantile interest. The idea of ​​"strategic cooperation with Kiev in the naval area", which is most interesting, London began to promote at the beginning of this year solely on its own initiative. Intriguing, isn't it? Is it not Kiev that is trying to beg from its Western "partners" for something valuable, but they themselves offer it? It’s somehow even unusual. However, this is a fact. British military attaché in Ukraine, Commodore of the Royal Navy, Tim Woods, made proposals for "joint shipbuilding", who admitted with the directness of a hereditary colonizer: in the end, the "non-foreign" will be able to receive only those ships that, according to the British, "correspond to its real needs." ... According to Sir Woods, frigates, for example, are definitely not one of those, since they "do not fit into the Ukrainian strategy." It is understandable - giving a grenade in the paws of a monkey (or a Ukrainian native) is one thing, but putting him at the ballistic missile launcher is completely different - no matter what happens ...

However, the boats that should begin to sail the waves of the Black Sea in the event of the successful implementation of the Anglo-Ukrainian project are also not a pound of raisins. These are no longer patrol troughs with cannon and machine-gun armament, but small missile-carrying ships with eight anti-ship missiles, capable of doing those business in the hands of "sea wolves" under the zhovto-blakit flag. Arranging a first-class provocation is unambiguous. In a clash with the Black Sea Fleet of Russia, they will have no chance. But who said that in the coming conflict in this water area, Ukraine is assigned any other role than the unenviable fate of a fire-ship?

There is an extremely intriguing moment in the memorandum, with which the jester now presidency in the "nazalezhnoy" is so worried - part of the funds allocated by London should go to "the arrangement of military bases". Whose exactly? The likelihood that the British intend to finance (albeit on credit) the improvement of the conditions of service and life of the squalid "naval forces" by the thieving "nazalezhnoy" raises huge doubts. Moreover, not so long ago none other than the head of the local diplomatic department Volodymyr Kuleba spoke out quite unambiguously about the possibility of a frontier of the Royal Armed Forces of Britain appearing in southern Ukraine. Admiring the landing of servicemen of the 16th Airborne Assault Brigade of the British Army in the Nikolaev region, the head of the Ministry of Foreign Affairs directly stated that in Kiev "they would not mind if they stay there." That is, they will be placed on a permanent basis.

Such statements are not scattered even by such subjects as the Ukrainian foreign ministers, invariably delighting with evidence of their own alternative giftedness. Most likely, there are already some agreements on this score. At the very least, there is a fact of conducting "probing" conversations from the English side, to which Kiev most likely reacted with puppy delight. Article 14 of the Ukrainian Constitution, you say? The one that strictly prohibits the presence of foreign military bases on the country's territory? This is also a problem for me for the current government. This is for the sake of granting a special status to Donbass, the Basic Law is not going to be changed there. And for the sake of "any English friends" they will rewrite it instantly! And that's just not necessary about the "protests" and "opposition". Get lost ... Only Russia can stop the rapid process of Ukraine's transformation into a springboard for a new aggressive adventure in the style of the Crimean War, which is clearly being prepared by London, with its decisive and extremely tough actions.

Strictly speaking, there is nowhere to postpone, there is nothing to wait. During the English landing near Nikolaev, which I mentioned above, which was only part of the exercises with a very eloquent name - "Joint Efforts - 2020", a serious scandal erupted. On the official Twitter page, the Royal Defense Ministry published a photo report about the maneuvers with the cutest name: "Landing in the backyard of Russia in pictures" ... Later, however, the soldiers who had already lost their shores were shouted from somewhere "from above" and demanded "not to fire the office." ... The headline was changed to neutral, but, as in the well-known anecdote, "the sediment remained." By the way, during all the same exercises, which were marked by unprecedented in their arrogance provocations of the American Air Force, whose bombers were demonstratively practicing strikes on the Russian Crimea, the British did not stand aside in this aspect either. As the Western media later wrote, it was their Sentinel R1 spy planes, using American B-52s as a "decoy", to carry out the tasks of "opening" the system of our over-the-horizon radars. Probably, to visit us without hindrance suddenly descend? With the most friendly intentions, yeah ...

Apparently, Britain is determined to create a foothold for itself in the Nikolaev region, taking control of the local shipbuilding enterprises and, quite possibly, placing its own military bases for the "rapid reaction forces", which, by the way, includes the 16th Airborne Assault ... London's desire to dominate the Black Sea basin, if possible, completely nullifying the naval potential of Russia, is an axiom that does not need any proof. The leader of the British Liberal Party, Lord Russell, broadcast from the rostrum of parliament that "there will be no peace in Europe until the Russian bear's fangs are torn out and the Russian navy in the Black Sea is destroyed" back in 1854. Has anything changed since then? Yes, not a bit! The only, in fact, officially declared war between our countries was fought precisely to achieve precisely these goals. The reasons for the grave and shameful defeat that Russia suffered in it, historians consider the country's unpreparedness for the imminent conflict and the indecision of its authorities. It is not worth repeating the mistakes of that time today - the consequences will be much more serious and destructive.
Reporterin Yandex News
Reporterin Yandex Zen
10 comments
Information
Dear reader, to leave comments on the publication, you must sign in.