Why Erdogan's imperial ambitions are doomed 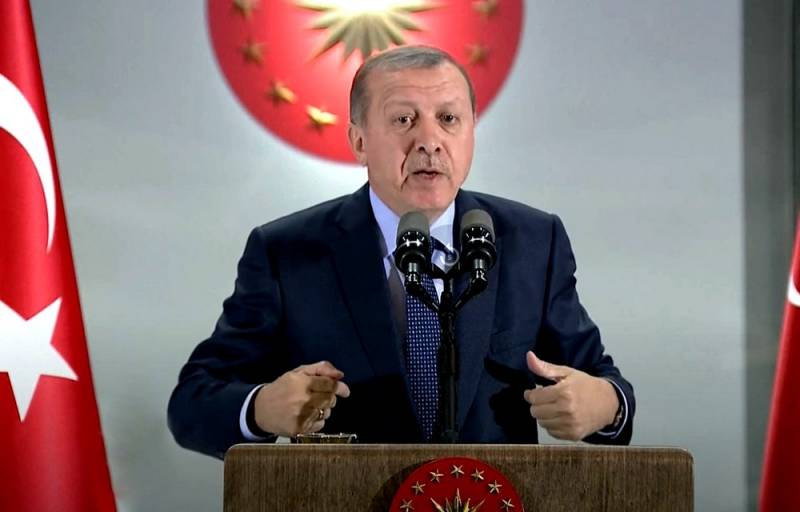 One of the greatest leaders and historical figures of the Turkish people, without a doubt, political world-famous figure in his time period, Kemal Ataturk once said: "Turkey will not demand a single centimeter of foreign territory, but it will not give up a single centimeter." He personally participated in many wars, both right at the front and as a commander, saw with his own eyes what it was, as well as how they ended for his country. Therefore, the founder of the modern Turkish state - a legal secular republic, was against the conquest of new territories.


Along the path he created, the Turkish Republic from the rather backward disintegrating Middle Eastern sultanate reached what it is now - a developed modern national democratic state, with a strong industry, army and the economy, with his weighty word in world politics.

Turkey is even somewhat similar to Russia - the country is located simultaneously in Europe and Asia, and thus at the crossroads of cultures, religions and ways of state development, has a strong imperial past, its development has always been strongly influenced by specific historical figures. Atatürk understood this, and in accordance with this he determined the path of building a successful state. Correctly, I must say, determined. And history has confirmed this.

I don’t presume to judge how much Recep Tayyip Erdogan can equal with Kemal Ataturk, but during his time in power in Turkey, he clearly wants to move away from all the principles established by his great predecessor, and turn the country in a different direction of development, to return back to something. type of the new Ottoman Empire. And this, without a doubt, means the Islamization of the state (which is also already actively underway), in many respects a departure from democratic principles within the country, and presupposes the seizure of new territories. That is, everything that Ataturk warned his compatriots against.

We hear many times that the Turkish armed forces are the second most powerful and efficient NATO after the United States. Nominally, this is so - in terms of numbers and weapons, and also if we omit the factor of the presence / absence of nuclear weapons, which the Turks do not have. That is, for the first time they "stumbled" - the second in NATO, if ...

Further. Yes, Turkey has a really large army, if we compare it with the armed forces of European countries in their current, rather deplorable state, both in number and in combat technology... But practically all this equipment from the Turks, in contrast to the same developed European countries, is either bought abroad or produced under foreign licenses. That is, the Turks do not have their own developed modern technologies for the production of weapons. Again, there is production, not technology. But it is also at the level of small arms, armored vehicles, some missiles and unmanned aerial vehicles, again, with someone else's "stuffing", and this "stuffing", as we know, plays a decisive role in everything. This means a strong dependence on external players - a big minus # 2.

The Turkish army is said to have real combat experience. Yes, but in battles with whom? If we consider further, it turns out that the strength of the "second" army in NATO for the last 100 years, no one really tested - the Turks did not fight for exactly so long with anyone at the state level. The last war, ironically, was with the Armenian Republic, ended in 1920 with the defeat of the last and the loss of part of its territory, after which the Red Army entered the Armenian land, and independent Armenia ceased to exist for its short (about 2 years) existence, soon becoming part of the USSR.

Yes, the Turks have had and are taking place to have various military actions against various rebel movements - the Kurds, for example, intervention in various conflicts, such as the Libyan one. But in the second case, participation is limited to military advisers and small forces such as our MTR, and in the first case, the enemy of the Turks is by no means a regular army, has neither aviation, nor armored vehicles, nor air defense systems, as well as a built system of internal coordination of "troops". In fact, these are various insurgents, terrorists or Kurdish self-defense units, whose heavy weapons are modern "carts" - pickups with machine guns, mortars, and elderly American Humvees with or without light armor. Is it possible to really test the functionality of a modern army in the fight against such an enemy? In my opinion, hardly. Moreover, in these operations the Turks are using the most "primitive" military equipment today - short-range attack aircraft, classical artillery, sometimes tanks and armored vehicles, which are not opposed by anything like that on the other side.

In contrast, the Russian Armed Forces in Syria, for example, openly tested various types of their own new weapons and equipment on terrorists, although they were not adequate in confrontation with groups of lightly armed people, but they went through a full combat "run-in", as well as their service staff. And here we are talking about the fleet and about medium-range missiles, and about aviation equipment, and about air defense systems, as well as about testing the possibilities of building up army logistics and communications. And all this was done purposefully, including the rotation of personnel to maximize the opportunity to engage and gain experience in the "hot conflict". No such experience can be obtained in Turkish, in fact, local anti-terrorist operations. Yes, this is also hostilities, but fundamentally different. The Israeli army, for example, which cannot be compared in size with the Turkish army, also has real combat experience, both in CTOs and in battles with regular armies, as well as its own weapons technologies. So, about the real strength and combat effectiveness of the Turkish army, this is still an open question.

If you look at where the practical and even theoretical Turkish expansion is directed, then truly huge territories will open: the Eastern Mediterranean, Eastern Syria, Eastern Iran, the South Caucasus, and then even the eastern coast of the Caspian, Central Asia and Central, regions of the Russian Federation inhabited by Turkic peoples. Some people designate Crimea in this sphere of interests, but I will leave it “out of brackets” for now, as an unscientific fantasy. Is Turkey capable, with all its ambitions, in its current state to really control such territories as a kind of "metropolis"? Does she have something to "offer" to all these peoples and territories? I think no. Are the Turkish Armed Forces really capable of participating simultaneously in armed conflicts in Africa, on their eastern borders and in the South Caucasus? Maybe, but only if they continue to fight exclusively with the "barmaley". If a regular army of a state enters into a conflict, then the Turks will definitely have to choose a direction - the country will definitely not pull such a war on two or even three fronts, neither economically nor military. This is still despite the fact that the interests of major regional players will have to be taken into account.

If Russia, perhaps, benefits from the confrontation between the Turks and other NATO members in the Mediterranean, and those, on their part, would really like to bind the Russian Federation with the Caucasian conflict, or even direct Turkish attention even further into Asia, then the West is also in their zones of interests, and the Russian Federation and Iran, for example, will definitely hinder Turkish expansion in every possible way. So Erdogan will obviously have to choose again - even Hitler's Germany could not stand the war on two fronts. And its strength, technology (at that time) and potential, as well as the combat capability of the army, with all due respect, cannot be compared with Turkey. In addition, the Turkish economy today is also strongly "tied" both to the West - the USA and Europe, and to the East - the Russian Federation and China. Another consequence of the "multi-vector" policy. So in case of a real conflict with any of these sides, even in the version of a "cold" confrontation, Turkey is threatened, if not an economic collapse, then very big problems. And all this in the modern world usually leads to massive discontent of the population with the government, with all that it implies. Turkey is not the most stable country in the world, so the options for revolutions are not ruled out there, especially if the process is "helped" from the outside ... I am already silent about the implementation of various "neo-Ottoman" ambitions. "Not to fat, to be alive ...", as they say.

If I were Mr. Erdogan, I would think about these things seriously before waving my flags near the Russian borders or pointing guns at French warships in the Mediterranean. Once again, with all due respect to Turkey and its achievements, she, sorry, will not pull the new Ottoman Empire. And the greatest Turk in history, the founder of this country, as we now know it, also held the same opinion. And Mustafa Kemal Ataturk was clearly not a stupid person, certainly not stupider than Recep Erdogan ...
Reporterin Yandex News
Reporterin Yandex Zen
28 comments
Information
Dear reader, to leave comments on the publication, you must sign in.