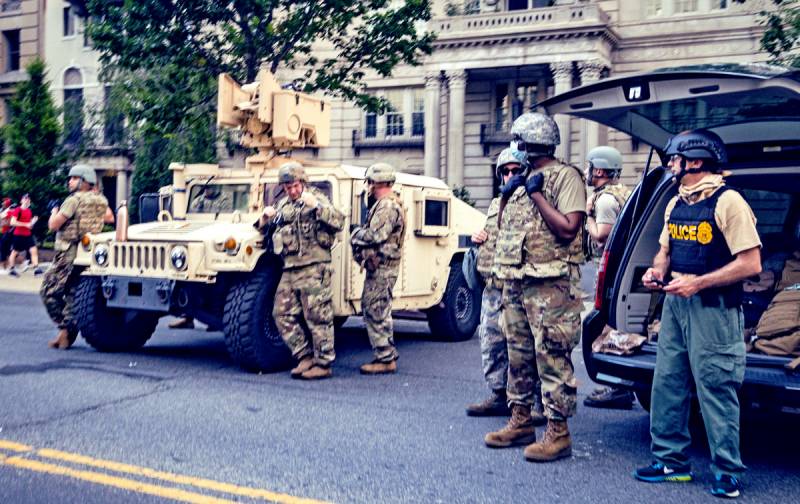 Less than a month is left before the US presidential election. So far, according to the results of sociological polls, Joe Biden is in the lead, but this still does not mean anything. For Democrats to gain the upper hand, their nuclear electorate must first pull away from their daytime television talk shows and make their way to the polling station. Meanwhile, the Americans are actively buying up weapons, setting new records, and according to statistics, most of them are doing this for the first time.


More and more prerequisites are emerging for the United States to go through its second Civil War. American society is radically split in half, and neither Trump nor Biden will recognize the enemy's victory. As they say, the war will write off everything, and the winners are not judged. They then judge themselves and write the "correct" story. But what could it be in reality, this "Civil War-2" in the United States?

Before discussing this topic, it is necessary to decide what its purpose should be. And the goal of the Democrats is to remove Donald Trump from the White House at any cost. The incumbent president believes that opponents are able to do this only in a fraudulent way. Something similar is already happening. Well-known entrepreneur George Soros openly supports an organization called Indivisible, which calls on everyone who is in the United States to come and vote in the presidential elections, regardless of their citizenship. It is clear that we are talking about migrants who are considered one of the pillars of the Democratic Party.

Thus, Joe Biden's team kills two birds with one stone: if Trump wins, the legitimacy of the results of the popular vote is automatically questioned and the question of the loyalty of the security forces to him arises. In the United States, a community structure called the Transition Integrity Group has been created, led by Rosa Brooks, who previously worked with Barack Obama, George Soros, participated in Human Watch and Amnesty International, and taught at West Point. This NGO openly pursues the goal of "expelling Donald Trump from the White House" with the assistance of "the democratically minded military and representatives of the special services." Biden's headquarters are openly subversive against the current head of state, aimed at pulling the American security forces over to their side. If Donald Trump's re-election on November 3 is not recognized as legitimate, then the president may lack the support of his bayonets. And he really needs it. Consider two main options for how Democrats might try to oust a Republican from the White House.

The first and least realistic is the “Ukrainian scenario”. With the passiveness of the special services, dark-skinned "onizhedets" turn Washington upside down, "unknown snipers" shoot at the crowd, which opens fire in response, since the Americans have a lot of weapons in their hands. Militants burst into the White House, and Donald Trump, saving his life, flies with his family by helicopter to the conditional "Rostov". If, of course, he is allowed to do so. Joe Biden drives into the Oval Office, and a ton of criminal cases are brought up against the fugitive Republican, in which, according to American tradition, they make him "extreme" for everything.

A much more realistic scenario involves the creation of conditions by Democrats in which President Trump himself will have to leave. After the US elections, a real Civil War will begin, but it will be network-centric. Riots and insurgencies will break out across the country, making the riots over the death of George Floyd look like flowers. The army and police will not have time to extinguish one fire, as more and more will arise in other places. From simple pogroms, the parties will quickly turn to shooting, there will be numerous casualties that opponents of President Trump will use against him.

The next logical step would be the creation of some kind of informal "Union of Democratic States", which will refuse to recognize the victory of Donald Trump and put the question bluntly: either he leaves the White House, or the United States will never be the same, threatening him with separatism. In 2015, the American army carried out a large-scale exercise called "Jade Helmet" in advance, the purpose of which was clearly to take control of rebellious states like Texas, urban battles and the subsequent disarmament of the population.

But what if the army really refuses to carry out such orders of the head of state? Then Donald Trump will face a dilemma, on the solution of which the future of the "hegemon" and the rest of the world will depend.
Reporterin Yandex News
Reporterin Yandex Zen
18 comments
Information
Dear reader, to leave comments on the publication, you must sign in.