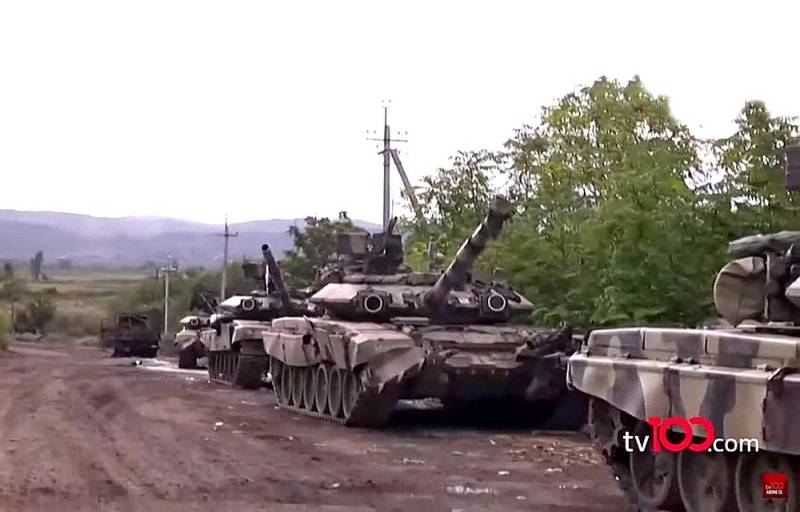 During the military confrontation between Armenia and Azerbaijan in Nagorno-Karabakh, Baku used T-90S tanks - pictures in social networks show the Azerbaijani military machinery in the vicinity of Jebrail. Modern tanks, which have become the last argument in battles on the ground, are equipped with knife-type mine trawls.


Meanwhile, Artsrun Hovhannisyan, a representative of the Armenian military department, reported on the shooting down of the Azerbaijani T-90S at the beginning of this month on his Facebook.

The Azerbaijani Armed Forces have about a hundred T-90S tanks (according to information from the IISS - the International Institute for Strategic Studies, at the beginning of this year there were 100). Also at the disposal of the Azerbaijani troops are the T-72 "Aslan" and T-55 tanks.

On the night from Thursday to Friday, the situation in the Nagorno-Karabakh zone remained tense - the sides of the confrontation exchanged blows. On October 8, Russian President Vladimir Putin called for a ceasefire in the conflict zone in the NKR, having previously held telephone talks with the leaders of Azerbaijan and Armenia. Heads of foreign affairs agencies from Baku and Yerevan have been invited to Moscow for consultations on the settlement of the situation.
Ctrl Enter
Noticed oshЫbku Highlight text and press. Ctrl + Enter
We are
Know-how of the Karabakh war: Baku uses "unmanned" An-2 to open the air defense of Armenia
They decided to include Armenia in the exercises of the Southern Military District of the Russian Federation amid the conflict with Baku
Reporterin Yandex News
Read Reporterin Google News
6 comments
Information
Dear reader, to leave comments on the publication, you must sign in.