Refusal of the Russian vaccine: Zelensky decided to sacrifice thousands of Ukrainians 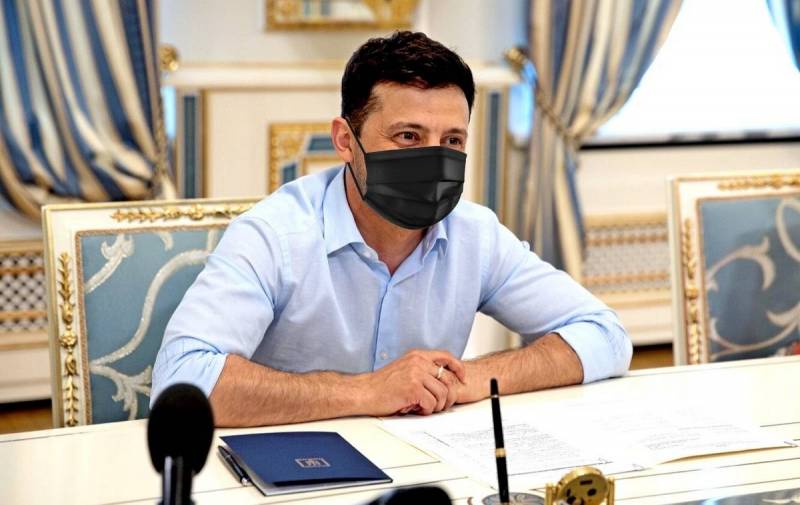 Ukraine is on the verge of a coronavirus disaster. On October 8, about 5 and a half thousand new cases of the disease were registered in the country. The country's health minister, Maxim Stepanov, made an appeal to his compatriots, in which he honestly admitted that the system headed by him is holding on with its last bit of strength and is about to “fail”.


At the same time, representatives of the highest state power "nezalezhnoy", who shamefully failed the entire "fight against the pandemic" widely advertised by them, are right now taking the last step so that the death toll from COVID-19 Ukrainians would be in the thousands and tens of thousands - they put a barrier to deliveries to the country of the only Russian-made coronavirus vaccine available today.

They dragged the goat to heaven ...

A rough, but extremely well-aimed folk saying about a pet desperately resisting attempts to drag it into the heavenly groves, exactly 100% corresponds to the current situation with Kiev and the domestic "Sputnik V". Russian President Vladimir Putin just the other day publicly announced that our country is ready to put on Ukraine this means that can save an incredible number of lives. These words were spoken in the Kremlin during a meeting with one of the leaders of the Ukrainian party "Opposition Platform For Life" Viktor Medvedchuk. The politician from the "nezalezhnoy" asked Vladimir Vladimirovich the question of the fundamental possibility of such assistance and received an immediate answer: "Yes, of course!" You just need to ask ... It's clear that without an official appeal from the Kiev authorities, such deliveries are impossible in principle. Forcibly, as they say, you can't be nice. And this is where the worst begins.

Judging by the rhetoric of the top officials of the state, they would rather allow a total pestilence of their own fellow citizens than turn to Moscow for a means to save them. Or even - they will accept the help she offered. So, the President of Ukraine Volodymyr Zelensky said that only the European Union, which allegedly firmly promised to do so, can provide "a real vaccine" that "will not cause doubts" to the residents of the "non-profit". Zelensky did not fail to call Medvedchuk's initiatives "cynical pre-election PR", obviously referring to the upcoming local elections in the country. Everything would be fine, but there is one problem. M-ah-ah-ah-ahhon so ... No "European" vaccine today simply does not exist in nature. And it is completely unknown when it will appear, and if it will appear at all.

All drugs of this property, over the creation of which scientists from almost the whole world are now fighting, are so far at various stages of development and have not even reached patent registration (and there is no doubt that everyone will try to get ahead of competitors, how much it is possible). The only exception is the Russian vaccine. Yes, its tests are still ongoing - after certification, but this is completely normal world practice. Moreover, the fact that this remedy has already been tested (and quite successfully) by members of the presidential family and such important persons as Sergei Sobyanin and Sergei Shoigu, testifies to its effectiveness and safety better than any official certificates. The head of the defense department and the mayor of the capital will not be stabbed with anything. Most importantly, not a single case is known when the use of "Sputnik V" would have ended tragically - with the death of a patient or his disability.

Moreover, according to available information, a long queue has already lined up for the domestic drug. As far as is known, the representatives of more than two dozen states submitted applications for more than a billion doses of the vaccine ahead of time! And among those who wish there are enough countries that are by no means poor, who can afford "all the best." The list of candidates includes not only Belarus, Kazakhstan, Uzbekistan, Moldova, Venezuela and our other traditional partners, but also India, the United Arab Emirates and Saudi Arabia. For some reason, they do not intend to wait until the "miracle drug" is born in American or European laboratories, but they strive to get our vaccine as soon as possible, without expressing the slightest doubt about its effectiveness. However, in the "nezalezhnoy" they continue to broadcast about the "untested remedy" ...

The extinction of Ukraine - everything is as it should be ?!

But perhaps the situation with the incidence of COVID-19 in Ukraine is so good that she does not need any vaccine? Alas, the situation is exactly the opposite. The head of the nezalezhnoy medical department, Maxim Stepanov, I mentioned at the beginning, openly admitted that his subordinates would soon have to deploy field tent hospitals to accommodate patients with coronavirus, the number of which is growing at a horrific progression. Stepanov himself compares the current situation in the country with the epidemic catastrophe that "covered" Italy and Spain at the initial stage of the spread of the disease. At the same time, the head of the Ukrainian Ministry of Health claims that during the pandemic, the number of beds for accommodating coronavirus patients was increased from 12 to 37 thousand (of which more than 20 thousand have already been filled), and in total the system headed by him will be able to accept up to 50 thousand inpatients. However, this is only more or less cheerful official statistics, which, unfortunately, does not correspond at all to reality.

As an illustration of the true situation, I will cite a story that I personally know not from the second or third, but from the very first hand: at one of the enterprises in Kiev, a worker who came to make repairs in a workshop was infected with COVID-19 (he later died) and contrived transfer the disease to every single employee. One of those who worked in that ill-fated workshop, a woman over 60 years old, who was extremely hard to carry the virus and tried to be treated at home, called an ambulance. By the time the doctors arrived, she was in such a state that she almost crawled to the door to let them into the apartment. She was denied hospitalization, which the choking patient begged for with tears in her eyes! "There is nowhere else to put!" - this was the categorical answer of the doctors.

In Ukrainian social networks, chilling photographs and videos are strolling with might and main, capturing the rows of "ambulances" lined up at the reception rooms of city and regional hospitals. Most of the patients delivered to them are coronavirus patients who are already at an extremely severe and advanced stage of the disease. Olga Bogomolets, a well-known doctor in Ukraine (and ex-people's deputy), predicted that in the very near future, queues would no longer line up for medical institutions, but, as she wrote, “for burial”. According to her, the mark of 10 thousand infected per day "nezalezhnaya" will reach in the coming days. The physician demands from the authorities to introduce the most severe quarantine with criminal responsibility for its violation, but it is already clear that there is nothing like this in the country, the economy which the first stage of the lockdown finished off almost completely, no one will do.

Moreover, an increasing number of observers have a strong feeling that everything that has happened in Ukraine since the start of the COVID-19 pandemic is nothing more than the implementation of one of the points of some monstrous plan for its depopulation. How else can you explain, for example, the fact that out of 66 billion hryvnias (about 182 billion rubles) allocated to a special fund created by the Ukrainian government to fight coronavirus, 35 are directed to ... building and repairing roads ?! But on the purchase of supernecessary (as the realities of the pandemic showed) devices for artificial lung ventilation, for which only 100 million were planned to be spent, in reality not a penny was released from the treasury! Roughly the same situation with the purchase of equipment for the admission departments of flagship hospitals - funding is zero.

An ambiguous situation with the promised doctors high co-payments for work with patients infected with coronavirus. But the police and the military get extra money "for harm" even with interest. The Ukrainian government has firmly learned who needs to be fed and pleased ... Zelensky, who returned from a fascinating voyage to Brussels for the Ukraine-EU summit, cheerfully tweets about a "proven vaccine" that is about to fall from Europe in the form of manna from heaven and weaves other fables in the style of "abroad will help us." The country listens to the grimacing clown: some are still with hope, and the majority - with a sinking heart in horror. More or less adequate people in the "nezalezhnoy" remember perfectly well that during the first phase of the pandemic, only China provided real help to her, and the Europeans and Americans were not very successful in dealing exclusively with their own problems, simultaneously pulling protective masks from under each other's noses , then drugs ... However, the most terrible thing is different - even now in Ukraine, disgusting rumors are spreading with might and main that "the Russian vaccine will be used as a biological weapon to destroy Ukrainians." Yes, yes, just like that and nothing else! They say that they will inject what they need to "their own", and the rest, under the guise of a life-saving drug, will be slipped into the most real deadly poison.

The very nature of these heinous insinuations and the method of their dissemination suggests that behind this "stuffing", most likely, stands either the SBU or the nationalist organizations controlled by it. In this regard, some local experts express fears that the situation with the Russian-made vaccine can be used by these forces for absolutely monstrous provocations, in comparison with which the "poisoning" of the Skripals or Navalny will seem like childish pranks in the sandbox. Are you in doubt? After the Odessa House of Trade Unions, the shelling of Donbass and the like ?! Alas, as the events of recent years show, the virus of nationalism and Russophobia is much more dangerous for Ukraine than COVID-19 and any other similar to it. In any case, in terms of lethality, it is definitely ahead of any diseases known to medicine.

If, as a result of a new wave of coronavirus spreading clearly out of control in this country, thousands, if not tens of thousands of people die, the blame for the tragedy will be not so much the disease that struck the whole world as Kiev's stubborn unwillingness to take even a step towards Moscow even in a situation when you need it to save your own citizens.
Ctrl Enter
Noticed oshЫbku Highlight text and press. Ctrl + Enter
We are
Secrets of the Secretary General: Was Stalin obsessed with a thirst for power?
Where is Russia going?
Reporterin Yandex News
Read Reporterin Google News
15 comments
Information
Dear reader, to leave comments on the publication, you must sign in.