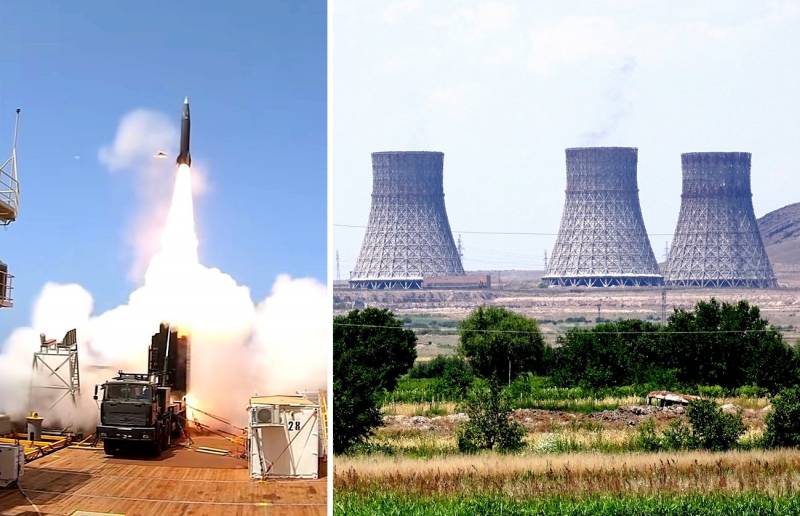 The war in Nagorno-Karabakh can lead to a real regional humanitarian and environmental disaster. Yerevan threatens to flood half of Azerbaijan, destroying the Mingechevir hydroelectric power station, and Baku threatens to turn the capital of Armenia into a radioactive wasteland by striking a nuclear power plant located just 30 kilometers from the city. Similar threats sounded before, but much has changed since the intervention of an external player, Turkey, in a long-standing conflict.


The Armenian army is gradually retreating before the onslaught of the more numerous and better armed Azerbaijani. Turkish F-16 fighters appeared in the sky over Nagorno-Karabakh. If Ankara actively begins to use its aviation in support of the allies, things will go very badly for the unrecognized republic. Yerevan has warned that in this case it will be forced to use Iskander-E OTRK. How effective will it be as a deterrent, and will it not bring more trouble to the Armenian people?

When discussing this topic, it is necessary to take into account a number of factors:

At first, Iskander-E missile systems in Armenia have a limited range of destruction, about 280 kilometers instead of 500 for Iskander-M. There are a lot of important facilities on the territory of Azerbaijan that could serve as targets: the Baku oil refinery, the Garadagh oil refinery, offshore oil fields, the Sangachal gas terminal, etc. The problem is that they are all outside the range of the export version of the Iskander. But the Mingechevir hydroelectric power station falls into it.

This is one of the most important sources of energy supply for Azerbaijan. Destruction of its dam by a missile strike could instantly wipe out half of the country in the valley downstream. It will be a real humanitarian and ecological catastrophe, which in the future with good reason in the international tribunal will be defined as a war crime and genocide of the Azerbaijani people.

Secondly, Baku will have something to answer to Yerevan. Using the Israeli LORA missiles at their disposal, the Azerbaijani military can destroy the nuclear power plant in Metsamor. The capacity of its two power units is 407,5 MW. As a result, little Armenia can get its own local "Chernobyl".

ThirdlyIt is not entirely clear who exactly controls the Iskander-E OTRK. According to one information, they are located on the territory of our base in Gyumri. But according to Defense Minister Vigen Sargsyan, the complexes have been at the disposal of the Armenian military since 2016:

The fact that the Iskander were delivered to Armenia, in my opinion, is obvious to everyone, because everyone saw them with their own eyes. The fact that they belong to the Armed Forces of Armenia, I can also confirm with absolute certainty.
It is quite obvious that Russia, which is considered an informal mediator in the Nagorno-Karabakh conflict, will not be satisfied with any of the scenarios described above. But there are important nuances. The defenders of Nagorno-Karabakh have the Tochka-U missile systems at their disposal, which they allegedly have already unsuccessfully launched in the direction of the Mingechevir hydroelectric power station. It is unclear to what extent such attacks can be controlled by the Russian Defense Ministry at all.

The second difficulty lies in the fact that it is practically impossible to control the actions of President Erdogan, who can order his aircraft to attack the positions of the Armenians. If something like this happens, then Yerevan and the Kremlin behind it will still have to answer. Of course, there can be no talk of destroying the reservoir, but the Baku-Tbilisi-Ceyhan oil pipeline, the Baku-Tbilisi-Ceyhan oil pipeline, the Baku-Tbilisi-Supsa port, and the Baku-Tbilisi-Erzurum gas pipeline on the territory of Azerbaijan can be chosen as the target of a missile strike. By damaging or destroying the infrastructure for the transportation of hydrocarbons, Moscow can achieve a temporary cessation of supplies to Turkey and Georgia, which will be a strong enough retaliatory strike.
Reporterin Yandex News
Reporterin Yandex Zen
10 comments
Information
Dear reader, to leave comments on the publication, you must sign in.