From Yugoslavia and Egypt, to Ukraine and Turkey: where the military coup succeeded and where not 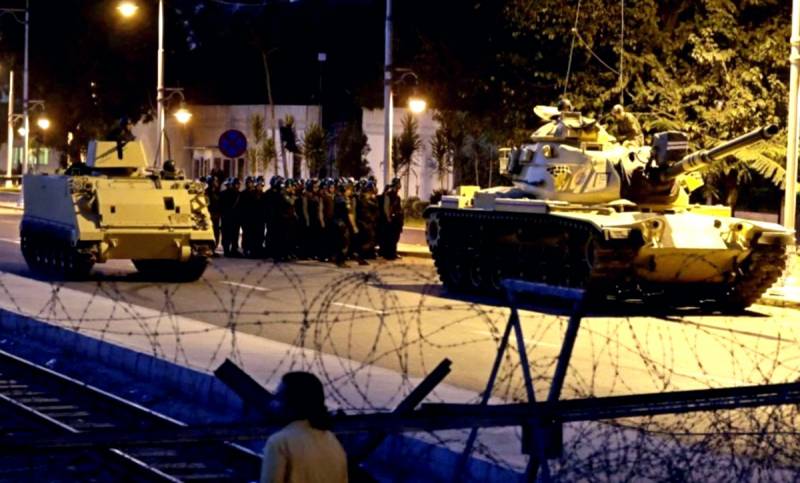 Well, dear friends, are we talking about the affairs of our sorrowful ones? I understand, of course, that in the light of recent events, in connection with the next postponement of the completion of the construction of Nord Stream 2 and the coming to a logical deadlock of the case of the future Nobel laureate, probably in chemistry, Alexei Navalny, who was insidiously poisoned by the “bloody gebnya”, there are a lot of sofa experts in the field of energy and toxicology, I hastily retrained as military analysts in the field of interethnic relations of the two once fraternal Transcaucasian republics, but I would like to return them to events in yet another hot spot on the globe of our former country.


I mean the recent unsuccessful attempt at a color coup in the Republic of Belarus. Is everything clear to you about it? Have you noticed, behind all this “white noise” around her, how the dad managed to avoid the negative development of the script for him? More precisely, not dad, but the Kremlin. After all, Lukashenka walked along the edge of the abyss, into which several dictators and a couple of absolutely legitimate presidents fell before him, who became victims of their own security officials, who followed the lead of the crowd or used it to remove the legally or legally elected president (it is unnecessary to cross out) their countries, followed by his abdication from power.

The Republic of Belarus

How this dad succeeded, I also already explained - Putin saved, in the literal sense of the word, under the cover of white noise (about which I spoke earlier, who solved both it and its tasks. How he did it and when, I also explained there (see the link above). I will repeat briefly for the lazy and forgetful. The fate of all coups is decided not by crowds of thousands of protesters on the street, and not even by external actors' attempts to take part in this, but exclusively by the power resource, which may or may not, for some reason, use the current government to suppress and disperse the disaffected. In all such "movements" there always comes a decisive moment when the siloviki can refuse to carry out "criminal orders" and go over to the side of the insurgent people. There are a lot of examples of this, about them below. And dad could easily repeat their fate.

And the Polish-Lithuanian external curators of the protests were not in vain hoping for this option. By that time, some particularly impressionable diplomats had already defected to their side, and cultural figures - so they just went jamb. All that was missing was a security minister. And there was such a moment when the chair under the dad swayed, but Putin insured him in time by substituting his own power resource under the swinging leg. In the form of a reserve of the National Guard on the border with the Republic of Belarus. The "swinging leg" understood everything and the excess did not happen. And this was the very moment of truth when it was decided where the boat of history would swing. When did it happen? But just then, when you saw the dad with a machine gun and laughed for a long time at the fact that he forgot to join his store. But the store is not needed when the “elder brother” with a conventional machine gun is on the border. The siloviki are not fools either, they understood the hint, and there was no possible internal betrayal.

This is a classic of the genre. And Putin showed it to us without noise and dust. The main thing here is not the use, but the demonstration of strength. Thus, the Kremlin stopped two threats at once - first, the threat of internal treason, and secondly, the threat of a shortage of its own Belarusian power resources when the protests were scaling up. The fact that the critical moment had passed became clear when Putin removed the reinforcement from the borders and returned it to his places of permanent deployment. Not everyone, carried away by the massive round dances of people with enlightened faces in white sweaters and red panama hats, also paid attention to this moment. Then the concert of Polish-Lithuanian boys and girls was over. I am writing in the past tense, because everything is with Belomaidan in Belarus, you can relax - the regime of the last dictator in Europe has resisted.

But not everyone was so lucky. I will not cite the well-known example of Salvador Allende, who died as a result of the military coup in 1973, when the military junta, led by the commander of the Chilean Ground Forces, General Augusto Pinochet, came to power, I will not, and everyone knows about this. But the fate of other presidents who have become victims of internal conspiracies is somehow forgotten.

Their list is opened by the President of Yugoslavia Slobodan Milosevic, forced in October 2000, under pressure from his own security officials, who colluded with the protesters, to resign in the course of the so-called "bulldozer revolution", which became the first in a subsequent series of color revolutions that subsequently swept across a number of countries North. Africa and the CIS. The reason for the protests was the opposition led by Vojislav Kostunica's disagreement with the results of the early presidential elections and accused the incumbent of rigging them. Do you have any associations with RB? Slobodan Milosevic finished badly. After being arrested in April 2001 on charges of abuse of office and corruption and subsequent secret transfer into the hands of the International Hague Tribunal, he died in prison in March 2006 before being sentenced.

A similar fate awaited the fifth President of Egypt, Mohammad Morsi, who was ousted in a military coup in July 2013. And although the reason for the military coup was already different - in reality Mursi, who at one time was the leader of the "Party of Freedom and Justice", a member of the pan-Islamist organization "Muslim Brotherhood" (banned in the Russian Federation), with the Islamization of the country "beguiled the shores." But the fact remains - he was removed from the presidency as a result of a military coup. He finished in the dock. Where, in fact, he died as a result of a heart attack, during the hearings in the espionage case, having already been sentenced to life imprisonment in the case of the state. treason.

The next person who suffered from internal treason in our country, but don't laugh, please, was the President of Ukraine Viktor Yanukovych. And although the events of 2014 with the so-called "revolution of hydration" are on everyone's lips, and everyone knows that Yanukovych suffered only from his cowardice, but according to the recent confession of the former Interior Minister in the Azarov government, Vitaly Zakharchenko, who has been performing his duties until the last days also fell victim to the military, who refused to carry out his orders. And this is an information bomb! Few people know about this. Yanukovych, of course, is a coward and a vegetable, I don’t argue here, but his order on February 19, 2014 to strengthen police cordons with units of the Armed Forces of Ukraine and armored vehicles on the outskirts of the city was ignored by none other than the Chief of the General Staff, who is also Commander-in-Chief of the Armed Forces of Ukraine, Colonel General Vladimir Zamana. And although Yanukovych immediately removed him from office by his decree, the moment was missed. After the victory of the "revolution of guiding", the colonel-general for five days, from 22 to 27 February, supervised the army as an authorized representative of the Verkhovna Rada and stated that the army was always with the people, which, however, did not save him in 2019 to face trial for the state. treason (well, maydanutyh have their own understanding of treason). That is why Yanukovych asked for help from the Russian Federation, but no help came ... Why - you know how it ended for Yanukovych - too. These three days, from February 19 to February 21, 2014, predetermined the course of subsequent events, the results of which we have all been removing for 6 years. In Belarus, Putin has not stepped on his old rake (I described this in detail above).

By the way, as in Venezuela in January 2019. True, in order for the legally elected President of this country, Nicholas Maduro, who was legally elected for a second term, to survive there, whom the States tried to replace with their protégé, speaker of the local parliament Juan Guaido, Russian troops did not have to be deployed. It was also enough that Maduro was not betrayed by his own army and the Cuban special forces, which make up the president's personal protection. And the States did not succeed, no matter how they stamped their feet. There is no reception against scrap. And although all six of America, starting with Albania, Australia, Denmark, Israel, all the countries of Lima (except Mexico) and ending with the Dominican Republic, the Bahamas, rushed to declare about the non-recognition of Maduro and the recognition of Guaido the very next day after the United States, demolishing furniture and breaking chairs. Georgia (mind you, all the great countries, it's strange that Ukraine was not there!), It did not help the States - things are still there. Maduro's regime survived because it relied heavily on bayonets.

True, these same bayonets nearly demolished his Turkish counterpart Erdogan in July 2016. The army in Turkey has always been above the state, and this led to the fact that in 1960, 1971, 1980, 1997 and 2007 it successfully intervened in its leadership (in the first three cases through armed coups, and in 1997 and 2007 through pseudo coups in the form of so-called memorandums, which in 1997 led to the resignation of the prime minister, and in 2007 did not allow Recep Erdogan to come to power). Why the military coup in 2016 failed, there are different versions, one of which is that someone warned Erdogan about the impending conspiracy in time. And this someone is sitting in the Kremlin. Whether this is so or not, I am not given to know, but the fact that a failed military coup allowed the Sultan to clean up the entire top of the army, police, state. the apparatus, the prosecutor's office, the judiciary, as well as the Ministry of Communications and Education, right up to schools and universities, as a result of which Turkey is transforming from a secular state into an Islamic republic with a super-president at its head, is a medical fact. And now we have a bunch of problems with this super-president, starting from Syria and Libya, and ending with Azerbaijan and Armenia. It would be better if it was demolished.

As his colleague Evo Morales, who has been the president of Bolivia since 2006 (by the way, the first Indian as the leader of this country for all 400 years since the Spanish colonization), was demolished. The Indian fell victim to a mob during unrest over charges of rigging the 2019 election results. The crowd, which doubted Morales' 10% superiority over his counterpart, former Bolivian President Carlos Mesa, was supported by the top generals in the person of the Commander-in-Chief of the Bolivian Armed Forces, General Williams Kaliman, which forced Morales to resign on the same day and retire with his daughter and vice-president to Mexico.

As you can see, reality refutes the famous phrase of the French Minister of Foreign Affairs of the times of the Directory of Charles Maurice de Talleyrand that

Bayonets are good for everyone, except for one thing - you can't sit on them

Maybe in the days of Talleyrand it was impossible to sit on them, but nowadays you cannot sit without them. And the above examples confirm this.
Reporterin Yandex News
Reporterin Yandex Zen
8 comments
Information
Dear reader, to leave comments on the publication, you must sign in.