A brutal blow to a field camp: Baku's targeted attacks could change the course of the Karabakh war 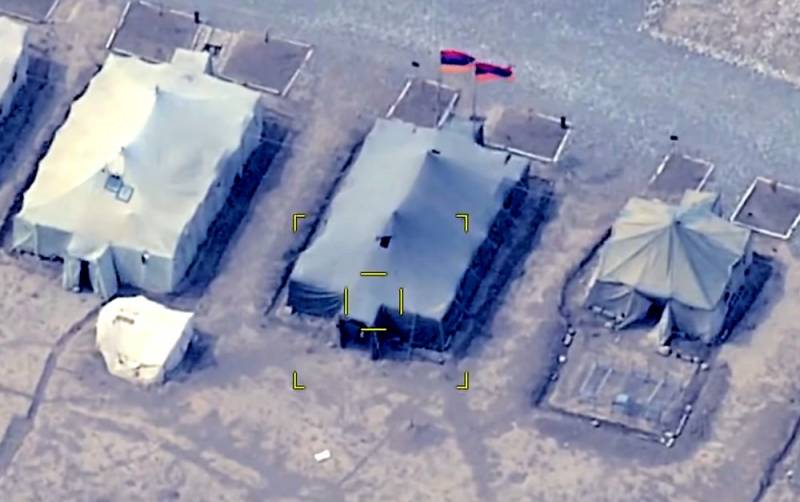 The Ministry of Defense of Azerbaijan has published new videos of air strikes by its drones on congestions of manpower, technology and the positions of the Armenian army in Nagorno-Karabakh.


It should be noted that the Azerbaijani military is actively using various unmanned vehicles. One of the know-how was a large-scale application Soviet aircraft An-2 for opening the positions of the Armenian air defense system. Then, the Armenian air defense missile systems are attacked by Israeli kamikaze UAVs IAI Harop, which are actually homing projectile aircraft with a flight range of up to 1 km.

When the area is cleared of Armenian air defense systems, the Azerbaijanis begin to methodically destroy enemy units from the air. In addition to the aforementioned disposable IAI Harop, other means of destruction are used. For example, the Turkish drones Bayraktar TB2, with a carrying capacity of up to 55 kg. They are equipped with Turkish MAM-L and MAM-C air-to-surface missiles weighing 22,5 kg.

The videos presented show how strikes are delivered to the field camp, various armored vehicles and vehicles, as well as to the combat positions of the Armenian military. By the way, it is difficult to call an attack on a field camp otherwise than cruel. These are not advancing subunits, not a column of troops marching along the front line.


The massive use of UAVs and targeted air attacks can change the course of the war for this region in favor of Baku, because, as the experience of Syria and Libya has shown, it is quite difficult to defend against such attacks. Moreover, Azerbaijan has been seriously introducing drones into its armed forces for a long time. It is well known in Yerevan and Stepanakert, but at the same time the Armenians did not have the means to counter the UAV. Now they are literally being shot as if in a shooting gallery.
Reporterin Yandex News
Reporterin Yandex Zen
75 comments
Information
Dear reader, to leave comments on the publication, you must sign in.