“Normal Ukrainians themselves have to put things in order…” - is this statement true? 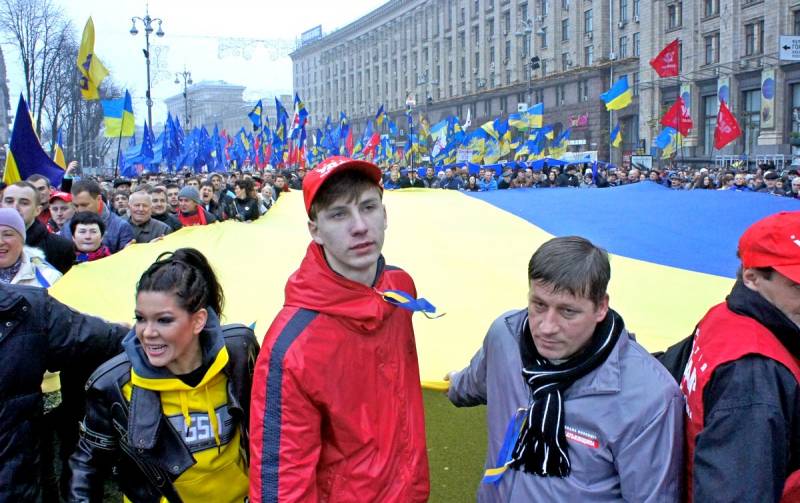 "Normal Ukrainians themselves must put things in order ..." Only after that they will be able to count on this or that help and support from Russia. Alas, it is this idea that has recently become more and more clearly the leitmotif of any discussion about a state transforming from a “non-brotherly” into an openly hostile state with its capital in Kiev and its citizens.


Would you like to know how such thoughts and appeals are perceived by the very “normal” (who categorically reject the Maidan coup d'etat and the national thieves' junta brought to power by it, who speak, think and feel in Russian) the inhabitants of this land? I will gladly tell you - on human rights, it belongs to this category.

Alas, in the process of writing this article, I will have, in particular, to discuss with one of the most respected authors of our resource - Alexey Pishenkov... What can you do - it remains only to recall the saying about the brilliant Greek philosopher and the primacy of truth ... In any case, his advice to Ukrainians "to throw off power by one or two", because they "usually do well" or "and live like this, since everything suits you", is, to put it mildly, completely untenable. The fact that in the process of the two “Maidans” (2004 and 2013-2014) that were probably in view of the government, it was not the Ukrainian people who “overthrew” the authorities, but completely different forces, is so well known and obvious that it does not need any proof. This kind of "revolution" - it does not matter, "velvet", like in Georgia, bloody, like in Ukraine or their attempts taking place right now in Belarus, are in fact the fruit of the consensus of local oligarchs and political clans, as well as external forces using their ambitions.

Behind each such coup there are colossal efforts of the intelligence and diplomatic services, huge funds and other resources. Each "Maidan" begins with the deployment in the country of a network of relevant non-governmental organizations (NGOs), the creation of controlled and "feeding" the existing media. This is in the shortest and most schematic presentation. Without such a foundation, any really popular protests either soon fade away by themselves, turning into outright margins, or develop into a classic "senseless and merciless" rebellion, incapable of doing absolutely anything except the destruction of everything that comes at hand.

Is Russia ready to take concrete actions in Ukraine to change the government through something resembling a "Maidan"? The answer is obvious. This is impossible now and was unthinkable in 2014. I can hardly imagine, for example, Mrs. Zakharova, like Miss Nuland, handing out cookies or something else equally nutritious on Khreshchatyk. To act in support of insurgents loyal to it, like its Western opponents - openly, publicly and assertively, Moscow either cannot, or does not want to. Let me remind you - in all the same 2014, not the slightest support was received by quite real "Anti-Maidans" in Odessa or Kharkov. People died, many ended up in dungeons. This is not at all a reproach, but only a statement of a well-known fact. Subsequently, the "elections" that legitimized the rabble that came to power as a result of the "Maidan" were recognized by Moscow - as, by the way, all subsequent ones. All political forces that are somewhat pro-Russian or at least moderate in relations with the neighboring country have been ruthlessly "cleaned out" - including through physical destruction.

Tinsel and buffoonery Ukrainian "opposition", defending oligarchic interests, we do not take into account and do not even discuss - it is extremely disgusting. And, by the way, the real masters of the country - all the same oligarchs who felt great under Yanukovych and now profit from the war and "Rotterdam Plus", are happy with everything. They don't need any revolutions for nothing. And after that, "normal Ukrainians" must "independently change the government" ?! Sorry, this is a complete disregard of reality and profanation. Anyone can arrange a new "Maidan" in Kiev today, but not supporters of reunification or at least the normalization of relations with Russia.

The partisans went on a campaign ...

Fortunately, the author of the one I quoted text at least he does not suggest that the inhabitants of Ukraine "deploy a partisan movement" aimed at fighting the nationalist authorities and their henchmen. But there are also those who in all seriousness declare: "We must fight!" To create an underground, take up arms and heroically resist ... Moreover, the times of the Great Patriotic War are cited as an example, when on the territory of the same Ukraine, whole units of popular avengers acted on a large scale, giving no breath to either the invaders or their minions: “Then we could, with a much stronger and more cruel enemy, but now - the guts are thin ?! " Not in the gut, sorry, it's the case. In this case, we have the same substitution of concepts, only in an even worse version.

The guerrilla movement in the form and scale that existed in 1941-1943 in the occupied territories would have been completely impossible without the colossal assistance of the "Big Land" - organizational, material, personnel. And most importantly - without a clear understanding that somewhere there is Moscow, and in it the Kremlin, and in the Kremlin Stalin. Without faith that the Red Army will come and liberate. Let me remind you that the task of the people's avengers was by no means establishing control over the lands captured by the Nazis, but the maximum diversion of the Wehrmacht's forces and resources from the front for the ultimate victory of the Red Army. What followed in the end. All modern "guerrilla wars", firstly, are fueled by resources (weapons, instructors, money) from the outside, and secondly, as a rule, they degenerate into a sluggish confrontation with government troops for decades, with sitting out in dense jungle. But there is no jungle in Ukraine. As there is no force, with the hope of which it is possible to deploy an armed struggle against the pack that has captured the country. Fight and die for the return of Yanukovych ?! Thank you humbly ...

Without clear guidelines, goals and leadership, any forceful “fight against the regime” will result in either the most banal terrorism, or an abomination similar to the Bandera regime - with its disgusting “raids” and bloody forays. Whom to kill? Representatives of the authorities? They are protected from this more than reliably, and a dozen others will take the place of each killed - even more cynical and greedy. Teachers conducting forced "Ukrainization" of schools? So this is the path of the OUN-UPA, hated by every normal Ukrainian. In addition, any military action will be enthusiastically received by both local radicals and figures like Avakov and Turchinov. She will completely untie their hands and allow them to deploy terror against dissidents in full force and breadth. Will they come and rescue? Sorry, I doubt it. There was already a chance. Another “way out for normal people” that is often proposed is emigration to Russia. It's tempting. Here is the dear Mr. Pishenkov invites everyone to "accept with the granting of citizenship." Citizenship is great. What about work? Housing? Let not in Moscow, St. Petersburg, not luxurious, but worthy. This, again, is not an extortionate claim, but again a statement of fact.

Understand at last: the overwhelming majority of the hundreds of thousands and millions of those very "normal Ukrainians" who are sick of every day they live in the cesspool that their country has been turned into today are people of 40-50 years of age. That is, they are burdened with families, everyday problems and, albeit small, but really "acquired in a lifetime" property. They have to take care of elderly and frail parents. They are trying to put children on their feet, not letting them turn into "faithful ukrov", they want to live the rest of their lives, at least, under their own roof, without knocking around in corners and without getting knocked down in search of a source of food. This is the reason why they continue to carry a passport with a trident in their pocket, and not with a two-headed eagle, which many of them would definitely prefer. You cannot live with one passport.

Their fate and their struggle today is an absolute rejection, a complete rejection of everything official and “patriotic”. Maximum distancing yourself, your family, your life from that bloody monster that the Ukrainian state has become. Deliberate sabotage of anything, any initiatives, appeals and demands from this very "state" outgoing - from military and civil service to participation in clownish "elections". Their path is to follow, in spite of everything, their culture, their convictions and their faith. If you have enough strength and courage, the following is open and public. Believe me, in the current conditions of "non-profit", where more than serious problems can arise for the Russian speech in a public place, and all users of the social network "Vkontakte" are promised to be registered with the police - this is quite a lot. It is not worth it, really, to judge and condemn those living and surviving here without having tasted in full, year after year, all the local "delights". And even more so, you shouldn't reject these people, accusing them of cowardice, spinelessness, “conniving the regime” and so on. At the very least, this is not the most reasonable state policy for a country that is going to build and defend the “Russian world”.

Calls to "arrange such a blockade so that there is no gasoline, no coal, no food" are all the more inappropriate. First of all, because of its impracticability. I will not go into details about its causes, but did not Moscow know for years where the lion's share of the fuel produced from Russian oil goes to another fraternal country? Or did they not supply it directly to Kiev - after 2014? But even if we assume that this plan will be implemented - who exactly will it hit? By the representatives of the Kiev authorities, the oligarchs? You know perfectly well that it is not. They will not be left without food, or without gasoline. In extreme cases, they will go to Paris, Vienna or Tel Aviv. Yes, now it will be more difficult to do, but they will succeed. In hunger and cold there will remain just those "normal" ones with which you can still unite or build good-neighborly relations. It is they who, in the chaos that have arisen, will go under the knives of perfectly organized and united nationalist militants. Let me repeat the question - will you come to save them, disdaining the sanctions, or even the danger of a military clash with NATO? Perhaps, first you need to decide on the answer, and only then judge and call for blockades. Well, in the meantime, by God, it is not worthwhile to repulse with cold callousness those who still expect in Ukraine from Russia and the Russian people not condemnation and alienation, but fraternal friendship. Believe me, there are many more of them than it seems. They really want to wait.
Reporterin Yandex News
Reporterin Yandex Zen
22 comments
Information
Dear reader, to leave comments on the publication, you must sign in.