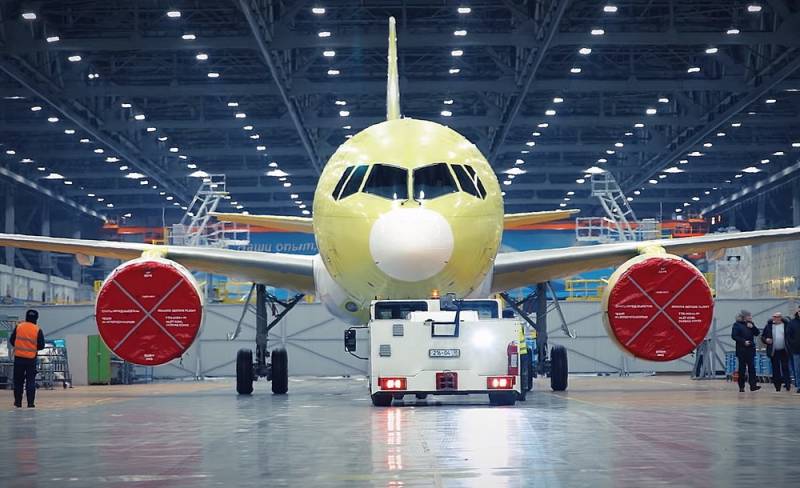 Another serious blow has been dealt to the domestic aircraft industry. Foreign manufacturers refused to supply to Russia electronic and other necessary components for the creation of civil aircraft. The launch dates for the MC-21 airliner are again shifted to the right. What to do, and who is to blame, let's try to figure it out.


Just a week ago, we told about the problems facing a promising medium-range aircraft that can make some kind of real competition between Boeing and Airbus. The dependence on the supply of imported components was indicated as the main one. The liner, at the customer's choice, can be equipped with either the domestic PD-14 aircraft engine (which is also not yet mass-produced), or the American PW1400G from Pratt & Whitney. The availability of an alternative sludge plant should reduce dependence on foreign suppliers.

The American authorities have already managed to create problems for the Russian project by banning their own and Japanese companies from supplying composite materials for the MS-21, which are necessary for the production of its "black wings". Because of this, the timing of the launch of the aircraft in the series shifted to the right for the period of forced import substitution. However, in an article a week ago, we pointed out that the domestic medium-haul liner is still heavily dependent on foreign suppliers. The production of the MC-21 requires imported electronic systems and a number of mechanical components. As reported, the United Aircraft Corporation has bought a significant stock of these components for the future worth tens of billions of rubles. As it turned out, the precaution was not superfluous. Vasily Shpak, a representative of the Ministry of Industry and Trade, complained the day before:

Our foreign partners, who supply ready-made systems for our aircraft, someone publicly, someone secretly, informed our aircraft manufacturers that they would not continue their relationship with our aircraft manufacturers either under existing contracts or under new contracts.
The official made the conclusion that in this way Western corporations are trying to stop the revival of the Russian aircraft industry. The restrictions will affect both the MS-21 and the Superjet, as well as a number of other projects. As they say, they sailed, or flew in, whatever you like. Now Russia will have to revive the production of electronic components from scratch. Moreover, this will have to be done in the face of problems with the supply of machine tools, other equipment, as well as a shortage of professional personnel caused by the "optimization" of the aircraft industry. This is undoubtedly necessary, but it will cost the country a pretty penny and further push the MS-21 launch date into series.

At the same time, I would like to draw your attention to the fact that the situation would not be so deplorable if the "sovereign's servants" corresponded to their position and timely fulfilled the tasks assigned to them. By the way, the course towards import substitution in the aircraft industry was set back in 2014, immediately after the cooling of relations with the West began. You didn't need to be a genius to understand how "effective international cooperation" would end up. So it ended, as it should have ended. But over the past six years, the production of electronic and other critical components has not been established.

It should be noted that what happened can be considered a bold point in policy liberal "reformers" who are still in power in Russia. In 1992, one of the main ideologists of the transition to private ownership of the means of production and the "invisible hand of the market" Yegor Gaidar, according to the memoirs of the Minister of Machine-Tool and Tool Industry N.A. Panichev, regarding his idea of ​​preserving the machine-tool industry, he stated literally the following:

Who needs your shitty machines ?! If you need it, we will buy everything abroad.
Well, "we bought it". Mr. Gaidar has been gone for a long time, but his work, judging by the results, lives on. It will be useful to know that even now the share of foreign components of the electronic base in our space industry is 20%, and in the defense industry - all 40%. It is not difficult to guess where the next sanctions blow will be struck, while our "sovereigns" are doing something incomprehensible.
Reporterin Yandex News
Reporterin Yandex Zen
87 comments
Information
Dear reader, to leave comments on the publication, you must sign in.