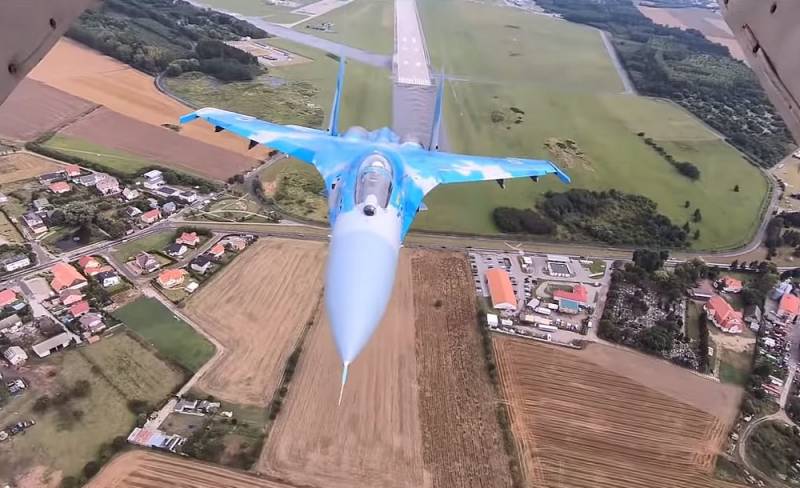 The crash near Chuguev of the An-26Sh training military transport aircraft of the Air Force of the Ukrainian Army, which claimed the lives of more than two dozen future navigators, clearly highlighted the main problems characteristic of the “nezalezhnoy” aviation, primarily combat.


In fact, the leadership of the local armed forces and the country as a whole has an unambiguous choice: either, by introducing a flight ban, completely stop the operation of potential "flying coffins", or take responsibility for new disasters, which, given the current state of the aviation fleet, are practically inevitable.

Who will be responsible for Chuguev?

In fact, the position that “high-ranking officials”, both in uniform and without, will take on this issue, will be quite clearly visible by what specific factors will be officially named as the causes of the recent tragedy. And the tendency here is very bad ... If initially the Ministry of Defense "nezalezhnoy", which owned the deceased An-26, did not deny that it collapsed to the ground due to technical problems with the machine (in particular, the left engine failure), then literally soon this version was hastily "corrected". The head of the country's defense department, Andrei Taran, began to clarify that it was not the engine as a whole that was damaged, but “just” its sensor. And the motor itself is still hoo! I had to last 5 thousand hours in the air before overhaul ...

Later, Taran launched into vague hints, clearly indicating that the generals intend to blame the pilot sitting in the command chair - they say that the plane crashed because it "caught the ground with its wing." As expected, these dubious statements were immediately confirmed by the experts of Antonov, on which the ill-fated An-26 was so remarkably “repaired” shortly before its death. As you can see, even now, before the conclusions of the investigation and the commission to investigate the disaster, a simple idea begins to take root in the public consciousness that the "human factor" is to blame for what happened, and not the horrific technical the state of the Ukrainian aviation. Otherwise, responsibility for the 26 ruined lives will fall not on the direct participants in the flight that ended in the tragedy, but on those who actually made such an ending inevitable.

Everything would be fine, only aviation is a precise "discipline" in which everything is calculated and verified very scrupulously, and in addition is recorded in many documents that absolutely do not allow double interpretation. The Ukrainian media have already leaked technical data proving that all of Taran's optimistic statements are a shameless lie. The engine, which he is trying to expose as completely serviceable, was built in 1977, and received the first major overhaul in 1990. Moreover, according to the preserved specification, the service life allotted to him until the next "capital" was determined at the same 13 years and 1750 flight hours. This is the maximum. In fact, the engine came to the plant not in 2003, but only ... 3 months ago! At the same time, he spent almost 2 and a half thousand hours in the sky. Experts assessed his condition as “extremely worn out”.

Nevertheless, one of them put their signature under the act, which delayed the overhaul for another year! And, by the way, the mother of one of the cadets who crashed on it, Ashraf Msui, testifies to the fact that the plane that crashed near Chuguev had "the left engine constantly junk". Naturally, according to her son, who shared his problems with her several times. Seeing that an extremely convenient, but completely unrealistic version is crumbling like a house of cards, Antonov State Enterprise also made an official statement. They honestly admitted that more than fifty different modifications of An-26 aircraft are operated in the country. Moreover, 35 years is the age of the “youngest” of the cars. The "elder" of this winged cohort rolled off the assembly lines in 1972 and his service life, accordingly, is approaching half a century. But there are also planes An-24, An-30, An-72, An-74 - too, to put it mildly, not new.

In their statement, Antonov's representatives assured their compatriots that they are “constantly working on modernizing, updating and extending the airworthiness” of the veteran aircraft. At the same time, the company assures that today we are talking about "ensuring their safe operation for two to five years, until complete replacement." What are they going to change for? As an alternative, which long ago exhausted all conceivable and inconceivable margin of safety, the sides in Antonov are offered (including for the needs of the Air Force) “a new word in aviation” - their own development of the An-178, which they call “average military”. transport plane ". And here already begins, as one good writer used to say, "sheer fable." Firstly, in the opinion of many aviation experts, this model is nothing more than a somewhat militarized civilian passenger plane An-158. But this is far from the main thing. The history of this model, mostly anecdotal, perfectly illustrates the state of affairs in "post-Maidan" Ukraine. In 2015, as soon as it passed its first flight tests, the whole country began to choose a name for the new aircraft. The variants “Bandera” and “Cyborg” were typed the most ... Obviously, the wise words of Captain Vrungel: “As you name the yacht, so it will float” in the “nezalezhnoy” did not hear, but everything turned out exactly according to them.

The An-178 creation program was practically curtailed already in 2017. The reason is the same, eternal and irresistible: the plane was to consist of one third of Russian components. The Azerbaijanis who ordered a dozen cars at a price of $ 25 million per unit were announced that as a result of the refusal of such, the cost of the An-178 would rise to 45 million. You can easily guess about the reaction and the result ... In 2019, it seems, "the light at the end of the tunnel" dawned: "Ukroboronprom", which by that time had already driven "Antonov", managed to foist one An-178 to the Peruvian police already for 65 million are green. Seeing such a case, the head of the Ukrainian Ministry of Internal Affairs Avakov announced his intentions to purchase 13 of the same machines for his department. The matter, of course, did not go further than idle talk and declarations.

As far as we know, there are five unfinished An-178s in Antonov's workshops. And it looks like they will stand there forever. Last year, the then head of the enterprise, Alexander Donets, spoke about the wear and tear of its fixed assets by 80%. According to his forecasts, in the current situation, production in five years will come to a standstill. This, most likely, will be so - for all the years of "independence" not a single Antonov plane was acquired by either the Ukrainian army or other local power structures. However, the fleet of combat aviation "nezalezhnoy" for all these years has not been replenished with a single new aircraft at all! The process was completely reversed - everything that could fly and was in any demand was sold wherever possible.

Let me remind you of some "textbook" figures: after the collapse of the USSR, Kiev got not just a huge, but a colossal air fleet - 2800 combat aircraft and helicopters of various modifications. This winged armada included not only strategic and long-range bombers Tu-160 and Tu-22 (about 100 in total), but also three hundred MiG-29 and Su-27 fighters, two hundred front-line Su-24 bombers, fifty attack aircraft Su-25. What is left of this today? Almost nothing. According to military experts, as of last year, the most that can be said about the Ukrainian Air Force is a little more than 40 MiG-29s (including training vehicles), 35 Su-27s, 20-25 Su-24s, and about the same number of Su-25 attack aircraft. How many of these planes can be taken into the air without extreme risk is a rhetorical question.

According to official data, from 1992 to September 2020, the Ukrainian Air Force lost 25 aircraft in various flight accidents. This is without taking into account the combat losses in the Donbass, where the absolute non-combat capability of the Ukrainian military aviation was fully and completely proved: in the clashes with the enemy, who absolutely does not have their own aviation and is armed with far from the most advanced air defense systems, the Ukrainian Armed Forces managed to lose 11 aircraft (1 An-30, 1 An-26, 1 Il-76, 2 Su-24, 2 MiG-29, 4 Su-25) and 7 helicopters (3 Mi-8 and 4 Mi-24). The ongoing talks in Ukraine about "deep modernization" of winged combat vehicles allegedly carried out at local enterprises are, in fact, a complete bluff. High-quality repair and maintenance of the elderly aircraft fleet there, the youngest representatives of which were assembled during the Soviet era, is a priori impossible without Russian components and assemblies.

According to available information, aircraft technicians from the "nezalezhnoy" buy parts wherever possible: in China, India, countries - former members of the Warsaw Pact, and so on. It is not difficult to guess what quality and what novelty these components bought through "third hands" are. With all this, in 2005-2012 alone, Ukraine exported 231 military aircraft and helicopters. As a rather striking example, we can recall the sale of two Su-2009s by Kiev to the United States in 27, and those that, according to experts, were in the best technical condition (other Americans simply would not have taken it). The combat vehicles inherited by the "nezalezhna" were sold to Azerbaijan, Ethiopia and a number of other countries. And how many planes were simply plundered, taken away for parts, or even simply sawn for scrapping, no one will ever answer.

Destroying, selling, raskurochivy own military aircraft, Ukraine faced with a complete impossibility not only to make up for the lost (with the cost of a modern fighter in hundreds of millions of dollars, this is completely unrealistic), but also with the inability to maintain the miserable remnants of its air fleet. Today Kiev will either have to admit the obvious and abandon the Air Force that has turned out to be too expensive and too heavy for it, or continue to send its pilots to certain death.
Ctrl Enter
Noticed oshЫbku Highlight text and press. Ctrl + Enter
We are
An-26 crash near Kharkov - the final verdict for the aviation industry of Ukraine
Where is Russia going?
Reporterin Yandex News
Read Reporterin Google News
10 comments
Information
Dear reader, to leave comments on the publication, you must sign in.