The worst is yet to come: Why shouldn't you relax in the case of Belomaidan 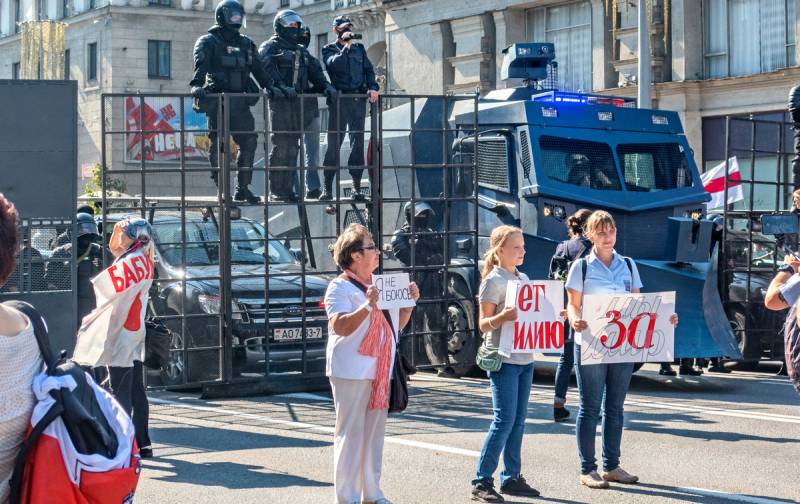 Recently, the alarmingly anxious tonality of publications in the domestic media devoted to the events in Belarus has gradually begun to be replaced by a kind of victoriously hating motive. They say that the danger has passed, the most difficult and dangerous time is over, the “father” with the help of Moscow “outplayed everyone” and won ... Isn't it too early to rejoice ?!


“Color revolutions” are extremely mean, unpredictable and capable of presenting a lot of awful surprises to those against whom they are directed. Let's together try to understand some of the points that indicate that the Belarusian defenders of order and the Constitution, as well as those who “root” for them with all their hearts, are not yet worth relaxing.

»
What is encouraging and encouraging is the position of the Kremlin, where, to all appearances, there is no complacency about neighboring problems, fortunately. Vladimir Putin, speaking to the participants of the Forum of Regions of Russia and Belarus, described the pressure that is being carried out on Minsk today as “unprecedented”. At the same time, the head of our state emphasized that Russian-Belarusian relations remain "allied and fraternal", not being subject to any "conjuncture". Most importantly, this primarily concerns the "area of ​​joint resolution of defense construction issues." In fact, we have before us a signal from Moscow to the West: press as much as you want until the levers break, but we do not intend to give Belarus to you. The warning is very appropriate and timely, because in an effort to quickly topple Alexander Lukashenko, who has become completely unacceptable for him as President, the "world community" is really using all imaginable and inconceivable ways to make the situation as difficult as possible for him.

What just does not come into play! And the demonstrative "non-recognition of the inauguration" of Alexander Lukashenko, declaring him "illegitimate" ... And the resolution of the UN Human Rights Council (HRC) called by the Russian Foreign Ministry "legally null and void", in which the organization, which has proved its complete failure over the past year (according to its General Secretary ), calls on the legitimate president of Belarus to give power to the opposition for a great life ... And a variety of sanctions, imposed so far for the most part against Alexander Grigorievich himself and his entourage, but clearly threaten to grow into attempts to "strangle" the Belarusian the economy, fortunately, not too Western-oriented. By the way, the "Maidan" people understand this nuance and therefore require more stringent actions from their puppeteers.

For example, one of their leaders, Maxim Vinyarsky, recently called on the EU to introduce "a ban on the export of Belarusian oil products, potash fertilizers and electricity", and it is better to "terminate any trade relations with Belarusian state-owned enterprises altogether." He claims that this will “deprive the Lukashenka regime of the opportunity to finance repressions,” although the last hedgehog from the Mozyr forests understands that the “zmagars” want to make the life of their fellow citizens as bad as possible, so that they would join their ranks from hunger. A separate topic is those outrageous games that the leaders of the West arrange around the impostor Svetlana Tikhanovskaya, who is touring Europe. I already wrote about this character - the lady is not as comical and harmless as it might seem to someone. It is all the more wild to see how, for example, the President of France allows himself to hold official meetings with this obvious henchman of quite certain special services.

All right, after such a rendezvous, Monsieur Macron would have limited himself, like a true Frenchman, to expressing his “admiration” for a lady (even if she was as shabby as the “President of the World”), but here's what the promises made to him “to do everything possible” in order to so that this outright rogue and the gang surrounding her take the upper hand in the current confrontation? What kind of "efforts" are we talking about? And generally speaking, after the embarrassment that happened to the French leader, who in print called on Lukashenka to “leave nicely” through his mediation, he'd better beware. The "old man" is a sharp man - he has already offered Macron his own assistance in transferring power to the "yellow vests", thereby showing that he wanted to sneeze at any shouts from the Elysee Palace. The funny thing is, drawing parallels between the situations in Minsk and Paris, Lukashenka is not so wrong just from a European point of view: just yesterday, the international human rights organization Amnesty International accused the French authorities of an "unprecedented attack on freedom of assembly" and that she "Went to the breaking of the law in order to detain and prosecute the protesters." So, to someone to teach Alexander Grigorievich, but certainly not Macron.

"... The case is solid when blood flows under it"?

As the "press service" of the self-styled "president" reports, in the near future she is supposedly scheduled to "meet with German Chancellor Angela Merkel and the government cabinet." And the grandmother there ... You can, of course, refer to these moments from the position of the Ministry of Foreign Affairs of Belarus, where they mockingly called Tikhanovskaya "a new attraction of Lithuania, the inspection of which is forced upon all guests", and summed up that "hasty meetings with strange subjects" have no results will be. Nevertheless, the fact that the top officials of the leading EU countries began to contact the impostor cannot but cause some concern. Okay, Merkel is her политическая her career is clearly coming to an end and, meeting his Frau, the chancellor takes a hard risk in a buffoon's cap - she has recently gotten involved in too many dubious cases. But Macron, claiming to be the "new leader of Europe"? It is unlikely that the political "heavyweights" would risk entering into contacts, which could subsequently expose them in a completely ridiculous light, without having well-defined, well-established and agreed plans for Tikhanovskaya. This means that they will continue to pour in considerable forces and resources into the Belarusian “revolution”.

As a matter of fact, this is what the head of the Russian Foreign Intelligence Service Sergei Naryshkin had in mind when he bluntly stated that the United States and its allies today "are using the most unscrupulous techniques and methods" to further "shake the situation in Belarus." The words of the chief intelligence officer of Russia that for the local "Maidan" specialists from the CIA and similar Western "offices" are preparing militants in Poland, the Baltic states, Ukraine and Georgia with might and main, are certainly not speculations or speculations. The wrong person, and the organization is not the one to indulge in fantasies, and even more so, to voice them in public.

The Zmagars and their foreign puppeteers understand perfectly well that the only, albeit illusory, chance for victory for them lies in the extreme radicalization of protests, in turning them into a civil war, with bloody sacrifices on both sides and an instant accumulation of mutual hatred on both sides of the barricades. As a matter of fact, one of the local Belarusian political experts Igor Tyshkevich frankly speaks about this: "Any rise in protest actions is followed by a stage of emotional burnout ... the actions will not stop tomorrow, but it will be more and more difficult to collect them." His Ukrainian counterpart Oleg Petrovets is much more outspoken. This is what he calls for quite openly: “The Belarusians need to realize that time is working against them and in this case a revolution is impossible without the use of brute force. If the first blood had not been shed on the Ukrainian "Maidan" ... the revolution would not have taken place ... But the Belarusians still have a chance for changes. If Lukashenka ... starts using extremely brutal methods of fighting protests, using firearms, the protesters will probably begin to respond in kind. This will be the beginning of the end of the reign of Alexander Grigorievich. He will begin to "extinguish" the people with aggression, and this, in turn, will lead to even more bloody and inevitable consequences "...

I apologize for the extensive quote, but it is in it that the quintessence of that cannibalistic plan, which, alas, worked in 2014 in Ukraine, is presented. I declare with full responsibility - by the end of 2013, a lot of leaders (including, alas, and security agencies) in Kiev were confident that a little more and "will dissolve by itself." The tired people will disperse to celebrate the New Year and Christmas, which is where the "Maidan" will end. However, the emergence of "sacred victims", no doubt killed not by Berkut, but by their own accomplices, led to an escalation of violence and the victory of a coup d'etat.

The main danger for peace and quiet, the very life of millions of Belarusians, for the statehood and the future of this beautiful country is that the protests there will undoubtedly try to “turn” in this direction. And they will do this, if you believe Mr. Naryshkin (and I don’t see any reason not to believe him), representatives of the most selective rabble, fully trained by the professionals of the secret war. In favor of the same thesis, albeit indirectly, is evidenced by the "personnel purge" that began recently at the most vile "mouthpiece" of the forces fanning the Belarusian "Maidan" - the Nexta Telegram channel. It was his rabid “broadcasting” from the very first day of the protests that was aimed at their maximum radicalization, at turning peaceful rallies and demonstrations into fratricidal slaughter. Fortunately, the task set by the Western curators was never completed. Now, obviously, some of those who have failed it are empty-handed and put out the door as having failed. However, this in no way can mean the curtailment of the subversive activities of either this poisonous source of information provocations, or others like it. Moreover, there is a very serious danger that in such a situation, the most radical methods may be used - such as a shotgun shot in the back of one of the protesters or the “brutal murder” of one of the leaders of the “opposition”. The authorities of Belarus can prevent such a situation only by normalizing and completely taking control of the situation in the country as quickly as possible.

The West still harbors hopes for the success of the coup d'etat in Minsk, and at the same time, after a certain line, it will be ready to go all the way in supporting it. Not so long ago, NATO announced that another 25 American soldiers with 30 Abrams tanks and 2021 Bradley armored vehicles would soon arrive at the Belarusian border, in Lithuania. According to Alliance Secretary General Jens Stoltenberg, they will stay there at least until the summer of XNUMX. As you can see, the future expeditionary force of the "peacekeeping forces" is already ready for action. The main thing is not to give him a single chance to set foot on the land of Belarus.
Reporterin Yandex News
Reporterin Yandex Zen
9 comments
Information
Dear reader, to leave comments on the publication, you must sign in.