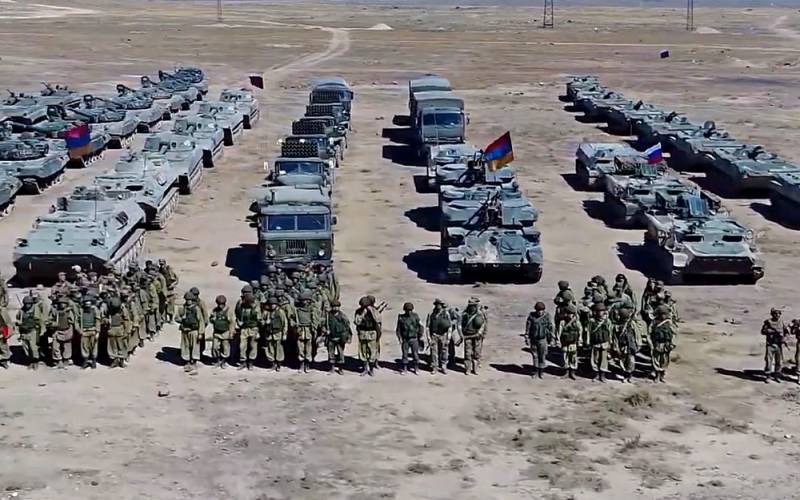 On the one hand, the armed confrontation that broke out in the Caucasus was quite expected (the territorial dispute between Baku and Yerevan, after all, has been going on for four decades), on the other hand, it became a pretty surprise for many. It seemed that nothing foreshadowed that the cannons on both sides would speak right now, and even with such ferocity that no one would recall since the bad 1994.


Be that as it may, but we all understand perfectly well that such situations do not arise “suddenly” or “just like that”. Someone's will always stands behind them and they serve someone's interests. Who can benefit from the fire, the flame of which is flaring up today in Nagorno-Karabakh, and how far can it be allowed to spread?

Let's start, naturally, with the countries that are directly involved in the collision. At the moment, when this article is being written, the Armenian media are reporting about the "massive offensive of the Azerbaijani army" in Karabakh, dozens of burned tanks, hundreds of killed and wounded. Roughly the same thing has been happening all the last days, and each side in every possible way extols its own combat successes, colorfully depicting the enemy's losses. With statements about who fired the first shot and, accordingly, is the culprit of the escalation, the picture is the same. Baku blames Yerevan, Yerevan points to Baku. As a matter of fact, in stories, when enmity lasts almost centuries, it cannot be otherwise.

But to whom, and in which of these two capitals, could the "small victorious war" be on hand? The fact of the matter is that those in power both in Azerbaijan and in Armenia have every reason to use the factor of an external enemy to solve internal problems. In the first case, the situation in the country has recently been rapidly deteriorating, since the fall in world oil prices economy suffers to a much greater extent than the Russian one. As well as from the consequences of the coronavirus pandemic. All this leads to a drop in the standard of living of the population, an increase in social tension and the emergence of protest moods in society, which are becoming more and more radical. And there are plenty of those willing to finally "move" the Aliyev clan, which is beginning to turn into a kind of hereditary monarchy, in the "upper echelons" of the Azerbaijani elites. So why not let off steam, remembering old grievances, territorial claims and "unrevenged blood"?

In Armenia, the situation is largely similar, but with some significant differences. Let me remind you, the local Prime Minister Nikol Pashinyan came to power as a result of an action that painfully resembles the classic "Maidan". And very many are considered the protege of the West, and not without good reason. Unlike similar figures from, say, Kiev or Tbilisi, he cannot decisively break with Moscow, and, above all, precisely for military reasons. Both old and young in Armenia are well aware that without the support of Russia, the country would have long ago become an object of Azerbaijani-Turkish aggression, and the matter would definitely not be limited to Nagorno-Karabakh. Looming in the sky of Yerevan, Russian MiGs are the best reminder of that. On the other hand, Pashinyan is slowly but surely trying to minimize the pro-Russian lobby in the country, at the same time reaching outright repressive actions. An example is the arrests of Robert Kocharian and Gagik Tsarukyan.

Some of the Armenian politicians in general, I am inclined to believe that the martial law declared by Pashinyan is not so much dictated by an urgent need as it is a preventive measure to prevent the opposition from speaking out, which was planning, in particular, to bring the people out into the streets in support of Tsarukyan. This is now out of the question. By the way, we can talk about a more subtle game of the head of the Armenian government, no longer directed against his own political opponents, who are increasingly declaring his complete incompetence in a high post, but against Moscow. As it was already said, the friendly attitude of the absolute majority of Armenians towards our country is conditioned precisely by the confidence that, “if something happens,” it will certainly come to the rescue. But what if it doesn't come ?! Here we, in fact, come to a completely different part of the conversation - about "external players" capable of influencing and influencing the conflict.

Centuries-long dispute over the Caucasus

The danger of the current situation lies precisely in the fact that the expansion of a local conflict to the size of a full-scale war, into which not only the Caucasus region, but many more participants will be drawn into it, is possible only with outside influence. According to the practically unanimous assessment of the majority of military experts, in their current state, neither the Armenian nor the Azerbaijani armies are capable of achieving a decisive and unequivocal victory over each other. Their fight can only result in a strategically senseless bloodshed. Both Baku and Yerevan are well aware of this - despite loud bellicose statements made to the public. Let's return, however, to Russia.

For our country, the current aggravation, and even more so, a full-scale war in the region is not beneficial from any side. Moscow has even and calm relations with both countries, trade and economic partnership, including in militarytechnical area. Yes, Armenia is a member of the Collective Security Treaty Organization (CSTO), however, let me remind you that its provisions categorically do not apply to any events in Nagorno-Karabakh, whose belonging to Azerbaijan our country recognizes in accordance with all decisions of international organizations. It's another matter if the enemy comes directly to the land of Armenia ... However, it is precisely such an extreme situation that Moscow would like to avoid. At present, according to the statement of the Armenian Ambassador to Russia Vardan Toganyan, the country's government is not going to turn to the Kremlin with a request for military intervention in the conflict. But this is still ... Everyone understands perfectly well that the most significant factor influencing the further development of events today is the behavior of Azerbaijan's main ally, Turkey.

There is no doubt that Baku would have behaved much more restrained if it had not been for Ankara looming behind it with its inflammatory statements and body movements in the form of a concentration of its own troops in Azerbaijan. However, just on the eve of Recep Erdogan's advisor Yasin Aktay clearly and unequivocally denied the possibility of direct armed intervention by his country in the current events, as well as the prospect of transferring "tourists" to Nagorno-Karabakh from among the Turkish-controlled militants from Syria or Libya. At the same time, however, he did not fail to emphasize the invariability of intentions regarding "military-technical support" to Baku, as well as to remind that, if necessary, the "road is open" for the Turkish army to this country. Thus, Ankara is making a claim to become the main force that determines the geopolitical agenda in the Caucasus region. Naturally, pushing Russia out of this position. In principle, nothing new - this conflict is as old as the world.

Alas, in Ankara from time to time they forget how the attempts to “raise the stakes” in this confrontation end and go on a “decisive offensive” for it. Undoubtedly, Recep Erdogan, who imagines himself the new sultan, sees in the current bloody events an excellent reason to once again make the Kremlin nervous. But at the same time, it seems, he again loses his sense of reality and does not take into account that opening too many "fronts" against Russia, one can eventually overstrain. Turkey is really unlikely to dare to invade or even intervene in hostilities at the level of a "limited contingent" of its own special forces or, say, the Air Force. Moreover, in Yerevan, the "red line" in the conflict was very lucidly marked: there they warned that if at least one Turkish F-16 appeared in the sky over Karabakh, the most formidable weapon would be used against the Azerbaijani side - Iskander-M missile systems. ". The prospect is more than unpleasant.

The "Karabakh Gambit" of the USA?

In all of today's history, as usual, there is also the notorious "third force" - the one that is just unambiguously beneficial to have shots thundered and blood shed in the Caucasus. Even more "bonuses" will be given to this side, which is so far from the most "peaceful" positions, if not only the Armenian and Azerbaijani military, but also the Russians and the Turks come together in battle. We are talking, of course, about the United States. Yes, the State Department there has already issued a "strong condemnation" of the military actions in Nagorno-Karabakh and an appeal to Yerevan and Baku to immediately stop them, as well as "return to negotiations within the OSCE group" (completely hopeless in the opinion of both sides). Also, Washington made a significant statement regarding "the inadmissibility of interference in the conflict by any external forces." All this is the official rhetoric, not worth a broken cent, in truth. In fact, the United States is precisely interested in the maximum aggravation between these very "external forces", that is, between Russia and Turkey. Both countries are now with the Americans not in the status of friends and partners, therefore, the more blood they put on one another, the more they quarrel, the more mutual damage they cause, the better.

There are here (as, in fact, always when it comes to the United States) also purely mercantile interests. Azerbaijan, with its stubborn desire to expand the export of its energy resources (primarily gas) to Europe, and even intending to do this with Turkish assistance, is one of Washington's unwanted competitors in the market for Washington. So if there are a couple of missile strikes on the local industrial facilities related to the energy sector, they will only rejoice overseas. There is another point. US presidential candidate Joe Biden has already let slip about him. According to his statement made the day before, “the settlement of the situation in Nagorno-Karabakh” would be most facilitated not only by “the deployment of the maximum number of American observers in the conflict zone” (we just didn’t have enough police officers there!), But, above all, “a complete cessation of Russia supplies arms to both countries ”! This is what he swung at ... This figure has not yet entered the White House and it is not known whether he will enter, but it has long been noticed that what the "deep state" has in mind, Biden has in his language.

In any case, before evaluating the role of the United States in the new bloody conflict in the Caucasus, it would be nice to find an answer to the question: how did it happen that the United States warned its own citizens in Armenia and Azerbaijan about an impending military clash a few days before it? start ?! Perhaps, it is here that lies the key to understanding the one by whose will blood is shed in Nagorno-Karabakh today.
Reporterin Yandex News
Reporterin Yandex Zen
13 comments
Information
Dear reader, to leave comments on the publication, you must sign in.