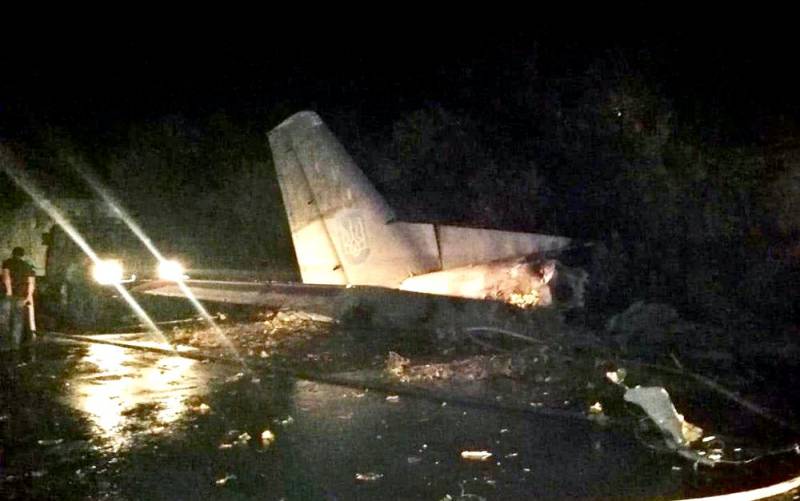 The crash of a military transport aircraft of the Ukrainian Air Force, as a result of which 26 people died, is not just a tragedy, it is more than a natural result of the events of recent years, an inevitable result of the state policy "Nezalezhnoy", which led it to the complete and final destruction of the aviation industry, and aviation as such. Unfortunately, the young guys who wanted only one thing - to fly ... had to pay for all this, and at the most expensive price ...

The investigation will establish ...

High-ranking officials of Ukraine, starting with its president, have managed to develop the most vigorous activity, in fact, aimed at using the tragedy as another tool for their own PR. I adhere to this point of view, based on the fact that Volodymyr Zelenskyy, who has come to Kharkiv to express his condolences and visit the cadet who miraculously survived the crash, did absolutely nothing to prevent all this from happening. Although he could. And he was obliged. The emergency meeting of the Cabinet of Ministers of Ukraine held just yesterday, entirely devoted to the incident, gives grounds for only one conclusion - the government of the "nezalezhnoy" intends to act in its usual manner: "to figure out who is to blame and to punish whoever."

The Prime Minister of the country Denis Shmygal has already stated that as many as fifty investigators are working at the scene, who "managed to preserve all the evidence." Evidence of what ?! Let me remind you that a criminal case in this case was initiated under Art. 416 of the Criminal Code of Ukraine: "Violation of flight rules or preparation for them." Fortunately, no one even tried to put forward delusional ideas about "enemy sabotage" or "terrorist act". Perhaps this did not happen simply due to the fact that the real reasons are too obvious to one and all. Not reaching two kilometers to the military airfield in Chuguev, board number 76 “flew off its own” at least twice! Its exploitation was, in fact, a game of "Russian roulette", which could not end well by definition. However, as one prominent figure of the Soviet government used to say, "every accident has a surname, name and patronymic." Here is their search and intends to attend to a special government commission, created by Kiev on the eve.

According to available information, the State Bureau of Investigation, which is engaged in clarifying the causes of the disaster directly on the spot, has already announced as many as four working versions. However, they boil down, in reality, to two assumptions. It is assumed that the cause of the crash could be a mistake or wrong actions of the An-26 crew. Very unlikely. The ship's commander, Bogdan Kishenya, who was at the helm, had eight hundred hours of flight, moreover, he knew this airfield "like the back of his hand." Even if we assume that some of the aircraft control functions were performed by cadets (and it certainly was, because the ship was performing a training flight - the seventh out of 10 planned that day), then it should be understood that they were not any “green first years”. For the most part, the guys have already completed their training as navigators and took flight practice. Moreover, Kishenya quite calmly reported to the dispatchers about the failure of the left engine and the intention to sit on one engine. According to aviation experts, this is quite possible and not even so extreme.

According to the second version, which is the main one, "the reason for the fall of the aircraft was the malfunction of its units." Um ... This is actually a common truth. Once the plane crashed in fine weather and being under the control of the pilot, who landed it at this very place many times, the reason is most likely in the car itself. But who exactly is to blame for the fact that these very malfunctions turned out to be so serious that they killed almost three dozen people? The biggest intrigue of this story lies precisely in the fact that, according to the documents available in the public domain, the ill-fated plane # 76 had just recently had to leave ... from in-depth maintenance, which was carried out on "Antonov", "native" for him!

The whole incident lies in the fact that at the enterprise that once built this ship, some technical measures should have been taken over it, "extending the service life." For those who are not quite in the subject, I will explain - the An-26 that crashed near Chuguev left the assembly shops in 1977. It was last repaired in 1996. Nevertheless, the Ministry of Defense of the "nezalezhnoy" has already officially stated that, in fact, they could have operated it for another three years "without renewing the resource." Vice Prime Minister of Ukraine Oleg Urusky, recently appointed to his post, in particular, just to "save the domestic aircraft industry", at the emergency meeting of the government I mentioned earlier, said that at board number 76 "the period before the next repair only expired in the summer of 2022 ". That two years, that three - a complete profanation and shameless lie. The officials of the military department can still be understood, but Mr. Urusky seems to understand at least a little bit in aviation.

Referring to the fact that the crashed An-26 "had a flight time of about 6 thousand hours with an allowable 20 thousand", and, therefore, could still be exploited, he either demonstrates his own incompetence, or deliberately cheats. According to regulatory documents, the resource of the An-26 model aircraft is considered to be exhausted in three cases: it has flown 16 thousand flights, spent 30 thousand hours in the air, or is more than 20 years old. Note - in any of these cases, and not by their totality! The plane, excuse me, is not a refrigerator - "it was turned off, so it was almost as good as new." It contains many units, assemblies, and the finest parts, the service life of which expires regardless of the intensity of work. Yes, according to the new standards (they were changed twice), the service life of the An-26 can be extended. But…

Firstly, such a decision can be made only after the overhaul of the aircraft (and not incomprehensible "measures" for which, judging by the documents, only a couple of months were allotted), but even in this case, a period of 40 years is considered completely limiting. Board number 76 was 43 years old ... Regarding what was done to it on the Antonov, the situation is generally very strange and completely incomprehensible. According to the documentation, the repairs were supposed to be completed by October 1. But the board crashed on September 26th. After renovation? Without him? According to quite reliable data, all "work on extending the service life" could well be reduced to conducting "technical inspections" and the subsequent drawing up of vigorous acts: "Good! Good! Good! " This is more than similar to the truth, especially taking into account the fact that simultaneously with the crashed plane on the Antonov, eight more (!) Similar machines - An-26, An-24B, An-30 - were undertaken to “rejuvenate”. And that's all - for the month of August-September! That is, most likely, it could not even go about any overhaul of these boards, prescribed by the instructions.

It is not for nothing that in Ukraine, immediately after the disaster, all flights on the An-26 and their analogues were strictly prohibited. Well, better later ... Maybe some of the future pilots will survive thanks to this decision, but the lives of the twenty-six who crashed near Chuguev cannot be returned. This tragedy was indeed predictable and, moreover, inevitable. The terrible state that the aviation industry of Ukraine has come to during the years of its "independence" and, in particular, during the period after the "Euromaidan" is its main reason, and not a specific failure of a particular engine or sensor. If something is broken for a long time and persistently, it will inevitably break - this is an axiom.

At the very beginning, it was no coincidence that I mentioned that Zelensky could and should have done everything possible to prevent Ukrainian planes from falling to the ground. At least - to listen to the team of the same "Antonov", whose employees have recently been bluntly declaring stubborn and purposeful actions to destroy the enterprise. Suited into the orbit of the state concern "Ukroboronprom", it is systematically and irresistibly moving towards complete collapse and ruin, since this is exactly what the overseas "partners" of Kiev want, firmly intending not to leave a single operating large enterprise in the "non-leveraged", especially those related to high-tech industries industry. Kiev can try as much as it wants to demonstrate attempts to "save" them, but for some reason it turns out that the creation of more and more command and administrative structures (at least the same Ministry of Strategic Industry under the leadership of Urusov) ultimately only leads to a worsening of the situation and accelerating the process of the final de-industrialization of the country.

In no other way can it be. And the reason for this is extremely simple: the trade gapeconomic ties with Russia. The plane # 26, which was lost on September 76, belonged to the number of special aircraft intended specifically for the training of the navigational staff of aviation (An-26Sh). They were built in due time, it was about three and a half dozen units. What kind of repair, what kind of modernization, what kind of "extension of the service life" of this machine is possible without the components produced in our country? Antonov, the Kharkov Aviation Plant and other Ukrainian enterprises of the same profile are bent over, being unable to export at least one winged aircraft in the absence of Russian components and parts (in the most non-exported aircraft, even more so). Now, after the incident near Chuguev, it becomes extremely clear - to provide quality support technical the condition of the already existing boards, which have exhausted all conceivable and inconceivable terms of service, they are also incapable.

There is no doubt that the State Bureau of Investigation, the Security Service of Ukraine, and the government commission will sooner or later find, or, even more likely, appoint “scapegoats” on whom they will “hang” all the blame for what happened. The ban on flights will be lifted and "veteran aviation" planes, each of which is potentially a mass grave for the crew, and everyone who had the misfortune to be on board, will again begin to rise into the sky. In the same serviceability state. Other options simply do not exist, and human lives in Ukraine today are worth absolutely nothing.
Reporterin Yandex News
Reporterin Yandex Zen
19 comments
Information
Dear reader, to leave comments on the publication, you must sign in.