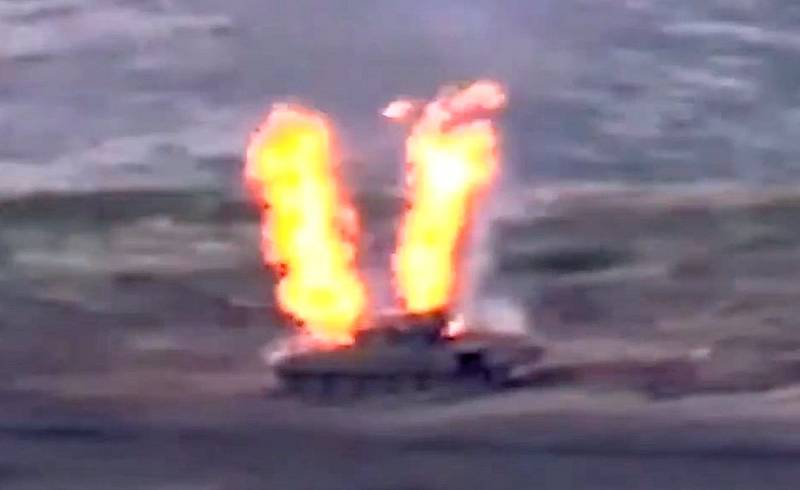 On the morning of September 27, 2020, on the demarcation line between Yerevan and Baku in Nagorno-Karabakh (Artsakh) a sharp exacerbation began... The Azerbaijani side announced the start of a counter-offensive operation, and the Armenian side published footage of the destruction of enemy armored vehicles.


The first video shows the destruction of two Azerbaijani T-72 tanks. The tank unit of the Azerbaijani army moved under the cover of infantry. A combat vehicle moving in the vanguard gets damaged and remains in place, it is bypassed by a second tank, which also gets hit by Armenian ammunition.


The second video shows another Azerbaijani tank on fire, as well as an engineering vehicle that was trying to get to the damaged T-72.


The third video shows the destruction of a couple more Azerbaijani tanks.


In addition, the Armenians published footage of the movement of the "Smerch" MLRS of the Armenian Armed Forces towards the front line, as well as the consequences of the shelling of Stepanakert by the Azerbaijani military.

In connection with the growing tension in the region, the Armenian government held an emergency meeting, which was reported to the public by Prime Minister Nikol Pashinyan. He posted on Facebook that the government has decided to declare martial law and begin a general mobilization.

The decision will take effect after its official publication. I urge the personnel assigned to the troops to report to their territorial military commissariats
He summed up.
Reporterin Yandex News
Reporterin Yandex Zen
8 comments
Information
Dear reader, to leave comments on the publication, you must sign in.