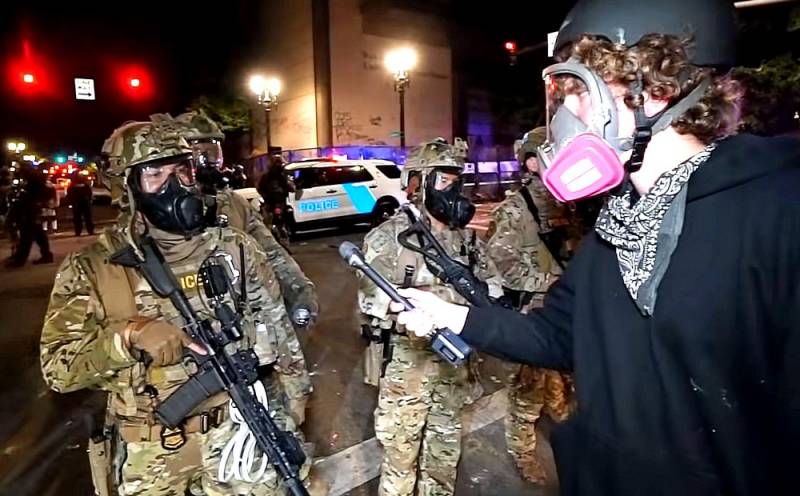 Over the decades since the collapse of the USSR and the collapse of the bipolar system, the American elites have carried out a number of so-called "color revolutions" around the world. Today the situation has developed in such a way that the United States itself has a very real chance to experience on its own skin what a "change of the ruling regime, carried out mainly by non-violent methods" is. True, it is hard to believe that it will be done without violence.


On November 3, 2020, it should be decided which development path the United States will follow, and the rest of the world will follow. If Joe Biden wins, the "globalists" will take revenge and quickly restore all the supranational governance structures already destroyed by Trump, through which multinational corporations and financial-industrial groups control the world. the economy and affect policies... In this construction, the United States is for its beneficiaries only a private "money machine" that prints unsecured dollars, and a "police baton", which should punish all those who disagree with this by military force. If Donald Trump wins, he will continue the course of America's sovereignty and, most likely, will continue to “dekulakize” the US Federal Reserve.

This is said in order to clearly understand what is at stake. Neither side will give up without a fight. Democrats and Republicans alike speak plainly that a nonviolent transfer of power is unlikely to be avoided. And, admittedly, the "atomic bomb" has already been laid under the United States.

At first, American society is already roughly split in half. One segment of the US population, mostly simple hard workers and rednecks, welcomed Trump's unexpected victory in 2016. Another, advanced and liberal, was from this in real horror.

Secondly, the pandemic has done its dirty work. The new president, thanks to an active protectionist policy, managed to score points in front of potential voters, dispersed the country's economy, but the coronavirus pandemic nullified all of his achievements in just a few months. Just surprisingly, COVID-19 arrived just in time, working against Trump. Political opponents are trying with might and main to make the head of the White House the extreme for the beginning of the recession. The contradictions between various strata of American society only intensified. Mass pogroms among representatives of the "colored population" are a protest not only against racism, but also against poverty and lack of life prospects. Now African Americans are ready to rebel over whatever they deem significant.

Thirdly, the ruling elites of the country themselves prepared the ground for a possible future explosion. During the riots in the "democratic" states, local authorities actually connived at the rioters, creating in them a sense of permissiveness. In response, President Trump punished New York, Seattle, Portland and metropolitan Washington itself for refusing to forcefully disperse the protesters by banning them from lending federal funds.

At last, Innovations in the voting system in the presidential elections became the “fuse” on the bomb. Now this can be done by mail, which opens up wide opportunities for massive fraud. It is also necessary to take into account the peculiarities of the US electoral system, where victory is ultimately decided in 1-2 "fluctuating" states. Will the losing side resist manipulation in its favor? Great question.

And then events can develop according to different scenarios. For example, both Trump and Biden will simultaneously declare themselves winners. The Democrats will refuse to recognize the Republican's victory and will take protesters out into the streets in an organized manner. Radicals from among the "colored population" may start pogroms in protest against "racist" Donald Trump. Then "unknown snipers" may appear on the rooftops, who will open fire on Biden's supporters. What will happen next, we have already seen in one form or another in different countries, for example, in Ukraine. President Trump is unlikely to flee to Rostov and will call on the security forces for help. But it is not a fact that all of them will unanimously support him, since the country will have a "second" President Joe Biden, who is supported by half of the population.

In fact, we are talking about the prospect of a real civil war against separatism in regions such as California and Texas. What will happen next is anyone's guess. But what to guess, soon we ourselves will see everything.
Reporterin Yandex News
Reporterin Yandex Zen
30 comments
Information
Dear reader, to leave comments on the publication, you must sign in.