"Nobel Prize" for Putin: Isn't It Time for Russia to Stop Being Humiliated in Front of the West? 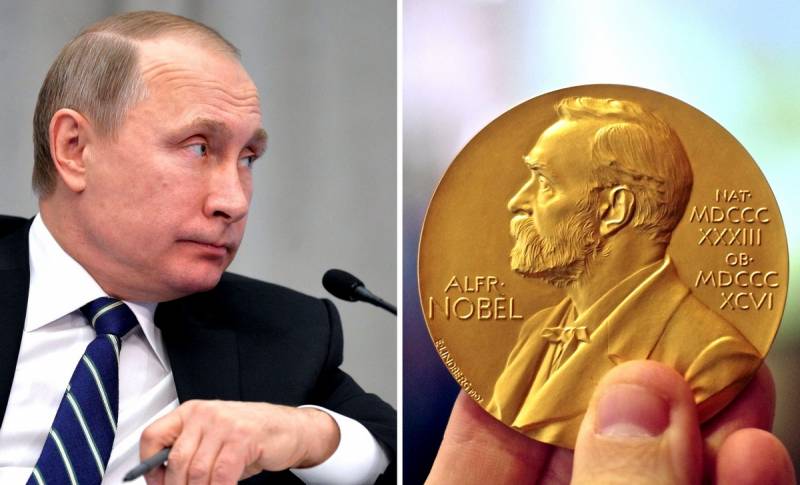 Bypassed by domestic media news the fact that Russian President Vladimir Putin has been nominated for the Nobel Peace Prize is certainly inspiring. Spirit-lifting, I would say! True, this raises a number of questions - from the elementary: "Are you serious?" to some others, somewhat more voluminous and philosophical.


For example, how long will our country try to "integrate" into the system of false "values" and "incentives" created by the West and exclusively for the West, initially based on biased and hypocritical assessments? When, finally, we begin to show self-respect and elementary common sense, will we learn that we are not just “strangers at this celebration of life”, but also that “this holiday” is absolutely useless to us?

In the footsteps of Gorbachev?

I have absolutely no doubt that Sergei Komkov, the editor-in-chief of the President newspaper, writer, one of the leading Russian experts in the field of education, who announced the nomination of Vladimir Vladimirovich for the Nobel Prize, was guided by the best intentions - pure, bright and very patriotic. They say, know ours, we are also not bastard, and similar souls with beautiful impulses. True, in this case it would be worth, perhaps, to think about something else. For example, that in the current situation the probability of awarding such an award to the leader of our country is not even zero, but a completely negative value. It is at least naive to count on such things in the atmosphere of natural Russophobic psychosis, which is now being promoted by the "collective West". Mr. Komkov, by the way, already made a similar attempt - in 2014. With a completely predictable result ... And in general, it’s time to understand that the head of our state the Nobel Prize can be awarded solely for its destruction! At least - for the total surrender of his interests and complete surrender to the West.

Does the example of Mikhail Gorbachev suggest any thoughts? By the way, this figure has already rushed to respond to the possible "competition" with an extremely strange comment. He suddenly announced that earlier this award could have been received "by pull or the devil knows how" (he meant himself, or what?), And advised "not to get excited", because it is not known how "people might react." Obviously, here Mikhail Sergeevich again measures everything by himself - the absolute majority of compatriots of the former General Secretary and the President speak in extremely abusive terms about the award of the Nobel Prize to him in 1990.

However, even if we distract ourselves from the affairs of days gone by and concentrate on the current moment, the situation looks somehow not very presentable. It looks rather ridiculous, what is really there ... With whom is the President of Russia invited to compete? With his American counterpart, Donald Trump, who became a Nobel candidate "for his efforts to resolve long-term conflicts between different countries." Specifically, for the rather clumsy efforts to establish a "bad peace" in the Middle East, which will inevitably end with such a "good quarrel" that you can bear the saints out. By the way, Sergei Komkov, who today claims that the nomination of the head of the White House was a "wild reaction of the United States" to his application to the Nobel Committee, is obviously not well informed.

Trump's candidacy was nominated twice, and not by the Americans at all, but by a member of the Swedish parliament Magnus Jakobsson (for mediation between Serbia and Kosovo) and his colleague from Norway, a member of the Progress Party there, Christian Tibring-Gedde (for “reconciling” Israel and the UAE). The actions of the US President for the final dismantling of the entire global system of collective security - rejection of the INF Treaty, the Open Skies Treaty and the like - are not taken into account. As well as the unprecedented inflation of the US military budget, military escalation with Iran, missile orders to fire on Syria and his own admission in his desire to “physically eliminate Bashar al-Assad ... A complete portrait of a“ peacemaker ”, isn't it? In addition, the former Polish Prime Minister and former President of the European Council, Donald Tusk, proposes to nominate Svetlana Tikhanovskaya and her husband Sergei for the same award, "to pay tribute to all Belarusians who participate in the protests." What? Quite a possible option.

In the company of Navalny, Greta Thunberg and Trump

Aleksey Navalny has already been nominated for the Nobel Prize - Rutgers University (USA) professor Sergei Erofeev said in advance, claiming that this dubious idea is supported with all his heart by "prominent scientists", and all as one belonging to the professorship of the "leading world scientific centers dealing with Russian problems ". Read - pseudo-research offices, abundantly fed by the CIA, the State Department and others like them. No, how do you even imagine such a turn? After that, if our "lamp of democracy" has a pimple on any part of his especially delicate body, the West will immediately start screaming: "It's Putin who has poisoned it again! To not share the Nobel Prize ... "Absurd? Of course! So there is no need to reach him in his attempts to get a Western "gingerbread" - moreover, it is pretty moldy and with an extremely dubious filling. Isn't it absurd for the head of a great power to compete with an unhealthy Swedish girl who preaches "ecological" madness and has become an "icon" of modern Luddites? Yes, yes, Greta Thunberg is again, like last year, nominated for the Nobel Peace Prize, what did you expect?

No, you can, of course, treat this issue extremely philosophically, as did Dmitry Peskov, who commented on the nomination of Vladimir Vladimirovich with the words: "They will be awarded the prize - great, no - it's also okay." But perhaps it is worth stopping to play with the West in its game, the chance of winning in which is adequate to the prospect of receiving a prize from the station thimbler? Let me remind you that our president has been nominated for the Nobel Peace Prize several times and not only by Mr. Komkov. In 2013, this was done by the International Academy for the Spiritual Unity of the Nations of the World, as well as Peter Truscott, a member of the House of Lords of the British Parliament and a former Minister of Energy of Great Britain.

Then the foundation was more than weighty - the active participation of Vladimir Putin in the peace process in Syria. And "Crimean Spring" did not stand between us and the West at that time. However, the award was received by the Organization for the Prohibition of Chemical Weapons (OPCW) - the one that is actively involved in stirring up the scandal around the "Navalny poisoning", and before that was fully noted in the "Skripal case", lies about "chemical attacks in Syria" and other Russophobic provocations ... Buns, you know, they need to be worked out. And with all diligence. Personally, I am most impressed by the point of view on this issue of Sergei Markov, expressed by him back then, in 2013: "Putin will not receive the Nobel Prize even if he stops the invasion of the Martians!" On my own I will add - even if he accomplishes this feat alone and in front of the whole world. The awarding of this award long ago turned into a closed "get-together", where all decisions are made solely on the basis of political expediency and current situation. And without any connection with reality.

In 2019, the Prime Minister of Ethiopia, Abiy Ahmed Ali, became the laureate, allegedly having “reconciled” something with Eritrea. As far as I remember, peace negotiations were disrupted, borders were closed and the conflict resumed even before the award was presented in Oslo. But who cares ... However, the question is not in Ethiopia. And even, by and large, not in the Nobel Prize itself, which has long been the object of extremely caustic criticism from thinking people in the West itself for its bias and obvious bias. It's about what exactly ridiculous attempts to participate in any such events bring Russia - "awards", "ratings" and similar "vanity fairs".

Already now, the Western media are using the news about the nomination of the President of Russia for the Nobel Peace Prize as an excuse to once again, excuse the expression, it is banal to “wash the bones” both for him and for our whole country, recalling all its “sins” and “Crimes” - from Georgia and Crimea to Skripals and Navalny. We, of course, do not care, but why once again tease this pack and listen to nasty things in our address? Is it really unclear that every such situation gives the West reason to try again and again to push Russia around, to tell her, teach her how to live and poke her nose into our affairs. And then we take offense at the resolutions of the European Parliament, it is not clear from what hangover who is taking to decide whether the amendments to the Russian Constitution, for which the Russians voted, are constitutional, and to make other statements of the same kind regarding issues that do not concern him at all. And there is nothing to be offended! It's your own fault. Since we need their awards, recognition, approval - therefore, we are ready to endure kicks and spits, listen to lectures, and most importantly - follow them.

However, it does not reach. In domestic publications, there is a lively discussion of the issue that Vladimir Vladimirovich was not (and for the third time in a row!) In the "list of the 100 most influential people in the world in a year" from the American magazine Time! Just think - it appeared in it as many as six times, in 2015, 2016 and 2017 it was in it, and now it is not included. What a horror, what a loss ... There will be no Putin's name next to Black Lives Matter activists, American actresses and rappers. Will he survive ?! Oh, yes, Trump is on the list, and Merkel, and even Comrade Xi. Some people are especially pressing on this - the head of the PRC was left, but our leader is being ignored, and for the third year in a row. Doesn't it occur to anyone that the West still hopes to "tame" China and force them to act "according to the rules," but have they completely despaired of the possibility of "building" Russia? And thanks to Putin.

Shall we continue to humiliate ourselves on such "important reasons", to go out of our way to earn the favor of the "white masters", receiving sonorous slaps in response? Maybe we will still compete for the Oscar - we will shoot something grandiose with state money, about black Russians of unconventional orientation, suffering from “communist tyranny”? However, judging by the "masterpieces" of some domestic filmmakers, this is not long left ... Or maybe we still remember about national pride, about the sense of dignity of those times when our country did not try to follow someone else's rules, but established its own? It's about time, in my opinion.
Ctrl Enter
Noticed oshЫbku Highlight text and press. Ctrl + Enter
We are
Ukraine from the inside: traitors, curators and those who watch from the Kremlin
Ten "defeats" of Putin
Reporterin Yandex News
Read Reporterin Google News
107 comments
Information
Dear reader, to leave comments on the publication, you must sign in.